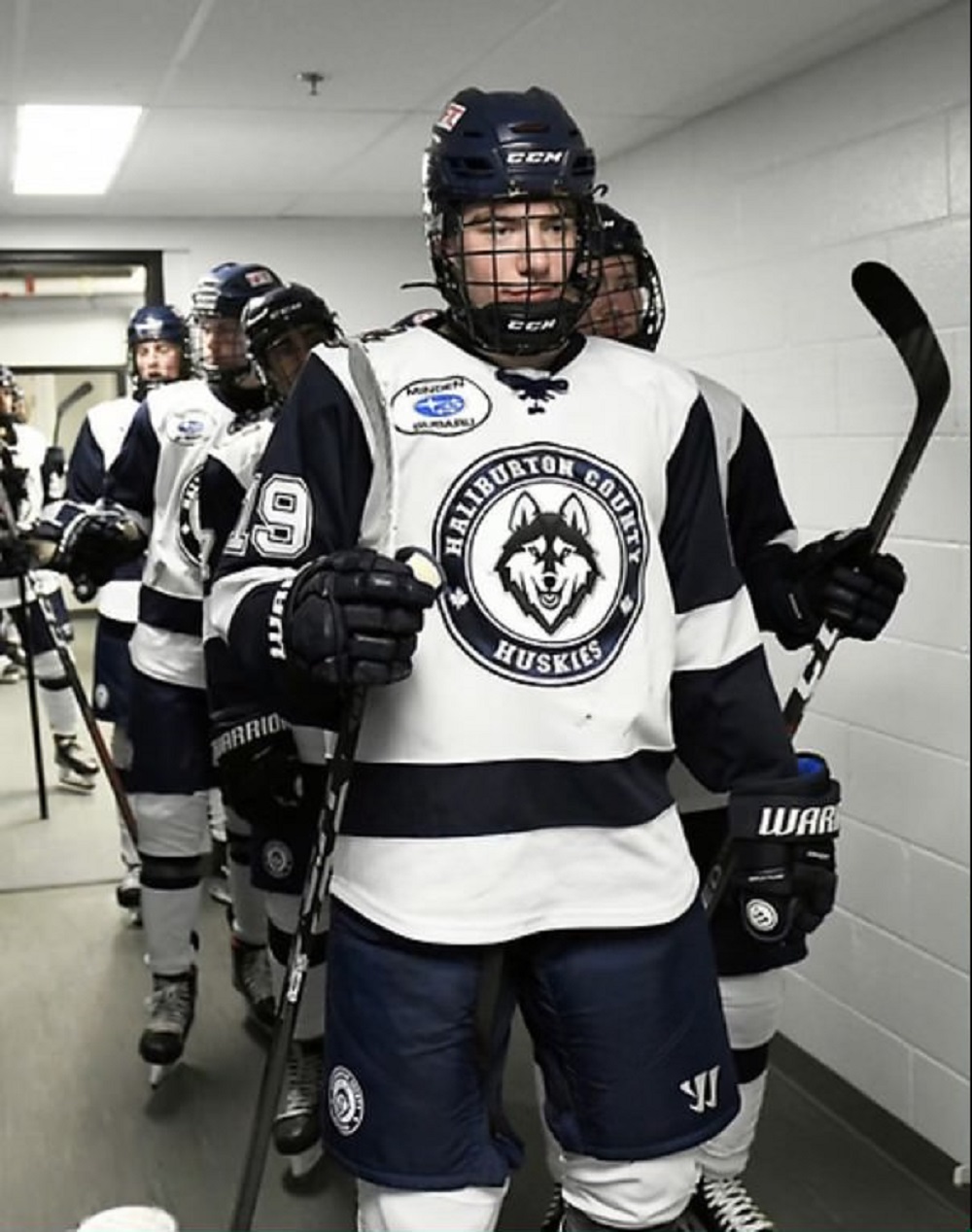 The 18-year-old, two-way forward has been an ever-present for the Haliburton County Huskies, suiting up in 29 regular season games and establishing himself as a force to be reckoned with on the team’s top line.

With 16 points on the year, Stevenson has fitted in seamlessly with regular line mates Oliver Tarr and Patrick Saini; his defensive prowess proving to be a perfect foil for two of the team’s top scorers.

“I’m having the time of my life playing in Haliburton. I love everything about it – the team, my billets, the community,” Stevenson said. “I’m just grateful for the opportunity.”

Stevenson is living in Minden with Caroline McEathron and John Stark.

The teenager, born and raised in Ajax, has really had to work to get to where he is today. His path to junior hockey has been different to most; as one of only four Huskies not to have been drafted into the OHL, Stevenson has scratched and clawed his way to the big time – taking nothing for granted, and treating each and every shift out on the ice as if it were his last.

Stevenson was introduced to hockey when he was four. He played AAA with the Ajax Pickering Raiders for several years, before moving on to represent the Markham Waxers at the U16 level. He played two full seasons with the Waxers, becoming a standout on the team.

During the summer of 2020, while preparing to return as one of the locker room leaders, Stevenson received a call from Ryan Ramsay, then head coach and general manager of the Whitby Fury. It took him by surprise.

“He explained to me how he’d like me to fit into the team, what he thought I could bring,” Stevenson said. “I was pretty excited. I wasn’t sure I was going to [get the chance to play] junior hockey.”

The COVID-19 pandemic shot down his chances of playing in Whitby that year. Stevenson wondered if that was it, his chance having come and gone. But he heard from Ramsay again last summer, this time with a bit of a different proposition.

It was a big deal for Stevenson moving to Haliburton County – his first time away from home. He was familiar with the area, with many of his childhood friends having cottages in the Highlands. Still, it was an adjustment over those first few weeks.

Now completely settled in, the forward is excited about what the Huskies can achieve this season. Challenging for top spot in the OJHL’s East Division, the blue and white are looking a solid bet to make the postseason. Once there, Stevenson believes the team has what it takes to challenge for a championship. “

I think our team is unbelievable. We’re strong all over the ice. We’re going to go really far and have a deep playoff run this year,” Stevenson said.

He expects to return to the Huskies next season, but looking long-term Stevenson is hoping to emulate Tarr, who recently signed a commitment to play Division 1 NCAA hockey with Buffalo’s Canisius College.

“I’ve talked to a couple of schools. It’s been a cool experience – I didn’t get drafted during my minor midget year, so this has been new for me. It’s nice to be recognized and gives me good motivation to continue improving my game,” he said. “A Division 1 scholarship is definitely the goal.”