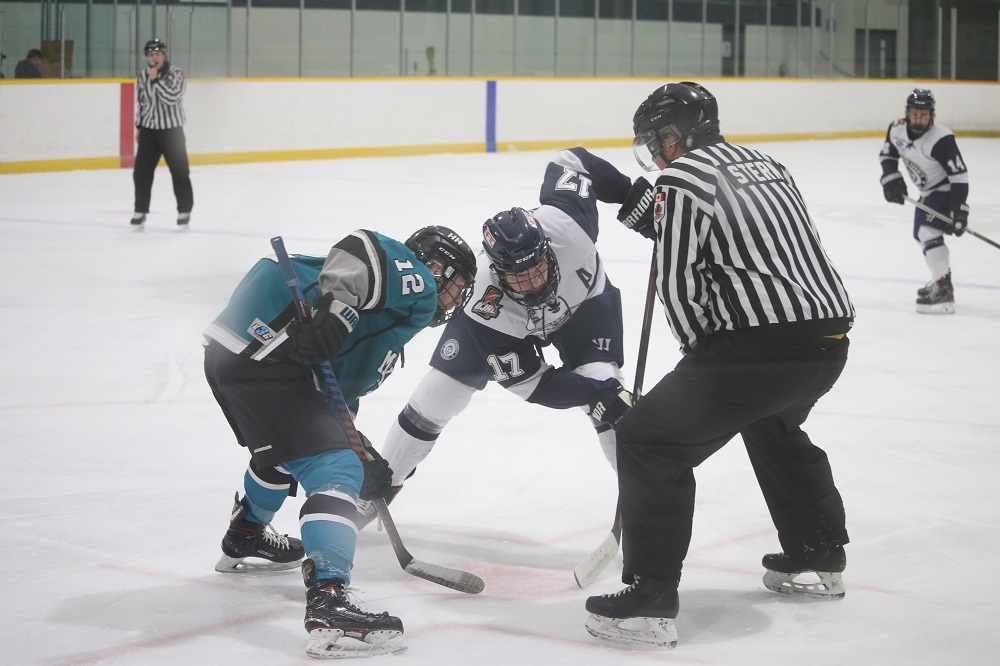 A depleted Haliburton County Huskies battled through a rare three-game weekend last time out, adding a win and two losses to their seasonal record and moving into second place in the OJHL’s East Division.

The first of the team’s triple header saw them make the hour-long trip south on Hwy. 35 to take on the Lindsay Muskies. In what was a tense, hard-hitting game Nov. 12, the Huskies dug deep and at times rode their luck as they battled to a 2-1 regulation win over their nearest rivals.

It’s a game that will be remembered for its unique stat line, with the two teams going a collective 0-6 on the powerplay but each registering a short-handed goal.

After an insipid opening period in which neither team made much of an impression in the offensive zone, it was the Muskies that got things going early on in the second – very much against the run of play. Shortly after Isiah Parris was issued a two-minute minor for interference, Muskies forward Duncan Scullion cut off a loose pass in the defensive zone and raced down the ice unchallenged, firing the puck past Christian Cicigoi at 4:59 in the period.

The lead wouldn’t last though, and it was a familiar face that came back to haunt the Muskies. Defenseman Will Gourgouvelis fired a hopeful shot from near the boards at 15:54, beating Muskies’ goaltender Ethan Fraser high over his glove. It was Gourgouvelis’ second goal of the season – the other coming way back on opening night Oct. 1, when the Huskies defeated the Muskies 3-2 at the same venue.

Heading into the final frame, the Huskies picked up the pace as they searched for a winner. Top scorer Oliver Tarr saw plenty of ice time as the team leaned on their top line for large periods. In the end, the gamewinning goal came from an unlikely source in fortuitous circumstances. Just 20 seconds after hometown boy Joe Boice went to the box for slashing, Sam Solarino went on the forecheck, chasing down a puck behind the Muskies’ goal. That effort paid off, with Solarino catching Fraser in no man’s land, stealing the puck and careening around the goal to fire in the winner.

“It was pretty hard to miss,” Solarino said with a smile after the game. “The goalie came out behind the net and coughed up a pretty bad one. I just followed it up and put it in.”

Head coach and general manager Ryan Ramsay was delighted with his team’s performance in what he called a “character win.”

“I think that performance really says a lot about the guys we have in our locker room, and the culture we’re trying to create here. We’re down a few players right now, and are running basically three lines, so to see those guys leave it all out on the ice, battle the way they did and come away with a huge two points … it was great to see,” Ramsay said.

Things didn’t quite go to plan on Saturday however, when the Huskies welcomed the table-topping Trenton Golden Hawks to town. Lucas Stevenson got the hometown team off to a perfect start, firing one in after just 1:44 in the opening period after being set up by Tarr.

The Huskies would then give up five straight as the Golden Hawks took charge of the game. Captain Nathan Porter notched a consolation tally late on in the third, before Trenton rubbed salt into the wounds, adding a sixth goal just minutes later. The final score at S.G. Nesbitt Memorial Arena was 6-2.

On Sunday, the Huskies made a trip down to the city to take on the North York Rangers. The team had fond memories of playing at the Herbert Carnegie Centre, recording a 3-1 win at the venue on Oct. 10.

It looked like being another happy visit for the Huskies, who raced out to a 3-0 lead courtesy of goals from Nicholas Athanasakos and Tarr. But the Rangers fired back, netting two goals late in the second and another early in the third, before ending things in overtime.

The point gained from the overtime loss lifted the Huskies into second place in their division, just narrowly ahead of the Muskies and the Wellington Dukes. The hometown team now boasts an overall record of 10-6-1.

They play the Caledon Admirals on the road tonight (Nov. 18), before traveling to the city to face the Toronto Patriots on Saturday. The Huskies will next play on home ice on Nov. 26, against the Cobourg Cougars. That game is slated for a later than-usual start in Minden, with puck drop set for 7:30 p.m.

Huskies to round out roster after camp