Home General News 100 Women: ‘We give and we care’ 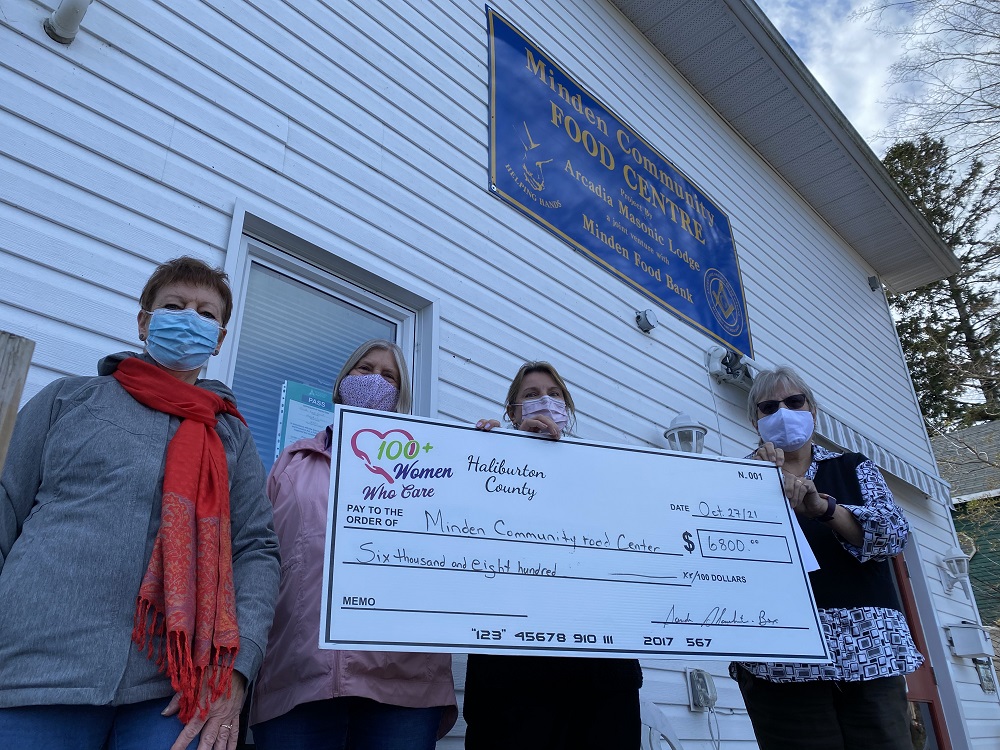 Local group 100 Women Who Care Haliburton County is continuing its mission of supporting some of the Highlands’ most in-demand services.

Since the club’s foundation in 2016, members have donated more than $80,000 to various charitable organizations across the County. The Minden Community Food Centre is the latest beneficiary, receiving a cheque for $6,800 Oct. 27.

That money was raised in a single hour by the group, who met in-person for the first time since the onset of the pandemic Oct. 20 at the Dominion Hotel.

“A pretty special group, who get together three times a year to raise money and give back to the community,” said club executive, Sandra Slauenwhite-Box. “The original concept was centred around fundraising, easy fundraising in a short period of time to support a charity that does great work here, and really helps people.”

Prior to each meeting, members nominate an organization for consideration. All names are then put into a box, with three selected at random. Those charities are then invited to present at the next meeting, with a chance to win that night’s pot. Once presentations are over, those in attendance vote on who they would like to see receive the money.

Each member in attendance on the night donates $100, or if they’ve registered as a team of two they give $50 each.

Other regular fixtures at the events include the Haliburton Hospital Auxiliary, Fuel for Warmth, Volunteer Dental Outreach, Haliburton Emergency Rural SafeSpace (HERS), and the Abbey Retreat Centre.

Pat Bradley and Tina Palmer were inaugural members when the local organization got going five years ago. Starting out with 34 members, they’ve since grown to 78.

“I never realized it would blossom into what it has. I thought it was a fabulous idea at the start, and now, looking at the money we’ve been able to raise, I think it’s even more fabulous,” Palmer said.

Since taking charge of the group last year, Slauenwhite-Box said she’s made it her mission to grow the organization so that it truly reflects its name.

“I would love to see us get to 100 women. I think we’re getting there – we’ve seen steady growth since launching five years ago, and we’re still seeing new members come on board, even now [during the pandemic],” she said.

There’s no annual registration fee to join. Anyone interested in becoming a member can learn more by visiting 100wwchaliburton.wixsite.com.

Ice drivers slide back into Minden