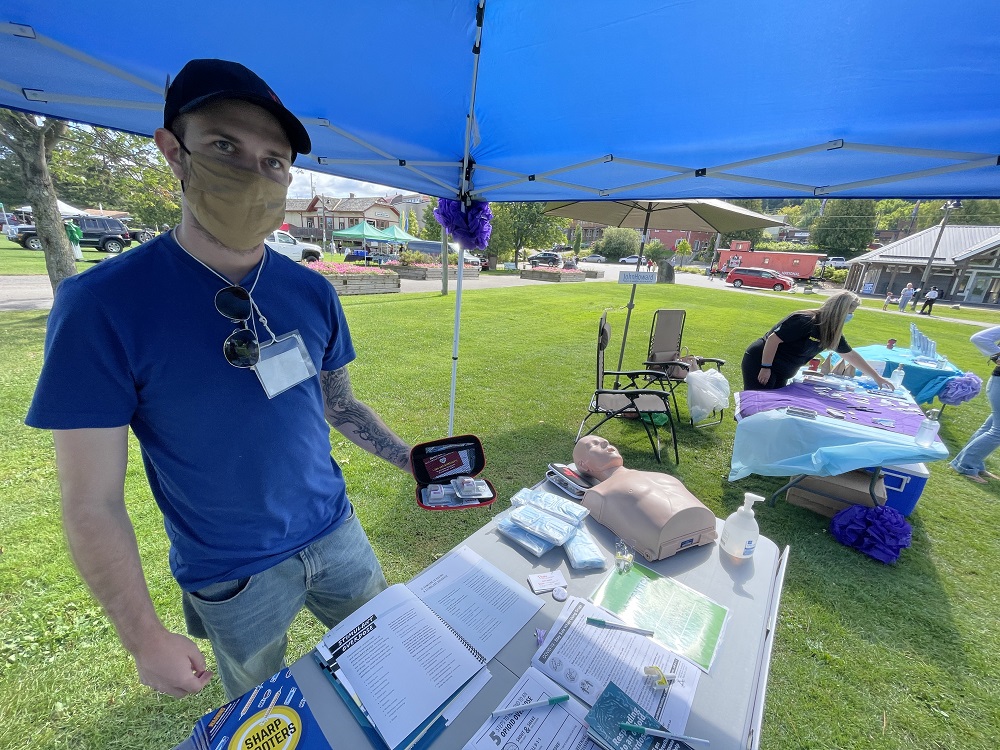 At a table in Head Lake Park, Matt Perrin shows two people how to use Naloxone kits.

The small nasal plungers are safe to have around kids, small enough to fit in a purse and could mean the difference between life or death for someone who has overdosed on opioids.

Perrin is a Harm Reduction Outreach Worker with PARN, a community AIDS Resource Network. He was set up at one of three booths in Head Lake Park on Aug. 31 at a vigil marking International Opioid Overdose Awareness Day.

Between April 2020 and March 2021, the HKPR District Health Unit reported nearly double the number of opioid overdoses across the region. Across Canada, cities such as Toronto are experiencing higher than ever rates of opioid-related overdoses, with 51 calls made to 9-1-1 on July 30 alone.

At the vigil, multiple people working on the frontline of the crisis in Haliburton County said the issue is increasingly pressing.

Gaudette said there are countless misconceptions around drug use, such as perceptions about who uses drugs.

“It isn’t strictly within an underserved community. It’s quite surprising how many people live successful lives, are business owners, and this just gets a hold of them.”

Many people who overdose don’t intentionally consume too much. Increasingly, the drug supply is tainted with the extremely toxic drug Fentanyl. A small amount mixed in with another substance is nearly impossible to detect.

Natasha James, a harm reduction and crisis coordinator with the John Howard Society, said Haliburton’s housing crisis also plays a role in the amount of drug use and people’s risk of overdose.

“Oftentimes that stigma gets in the way of finding proper and stable housing,” she said.

“If people don’t have proper housing they are more likely to use. We are very concerned about going into the winter months.”

Rebecca Eagleson works with the Canadian Mental Health Association as a case worker. At the vigil she and a colleague were spreading awareness about their services and support programs. She said a lack of services in Haliburton makes getting help with mental health difficult: that can be linked with drug use or serious mental health conditions such as opioid addiction.

“Up here there is almost next to nothing. I think that’s a huge contributor to what’s been going on up here recently. It’s a lot of unmanaged mental health and people unable to access resources.”

On the trail of an 80-year-old cold case