Home Sports Commitment from the rink to the track 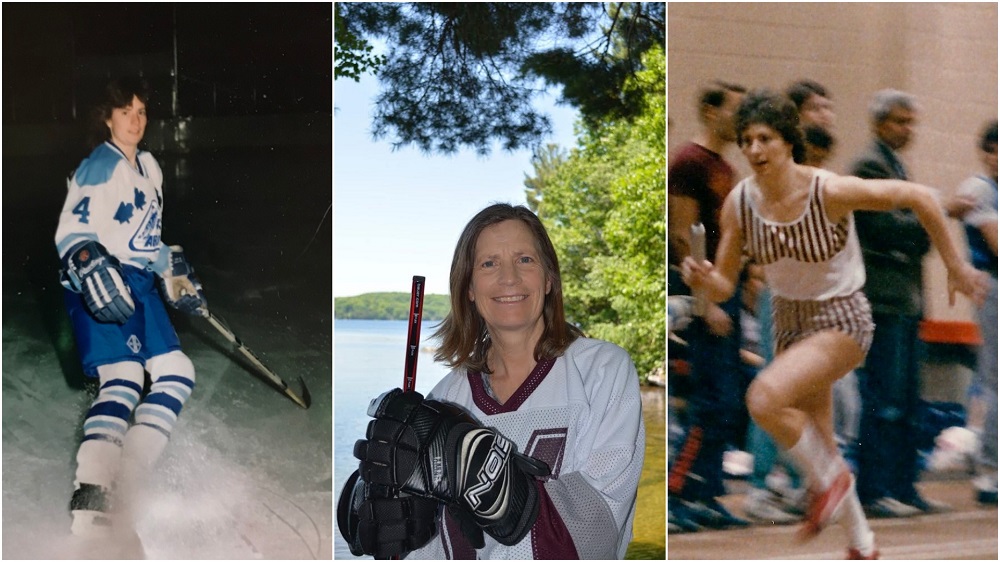 Multi-sport athlete and long-time coach Marla MacNaull said she is “humbled” to be recognized in the first group of Haliburton Highlands Sports Hall of Fame inductees.

MacNaull excelled at whatever sport she played. Through her long career, she’s shown how determination, enthusiasm and hard work bring success on the track, crosscountry trails and ice rinks across Canada.

The Hall of Fame committee nominated MacNaull, writing that her stamina, toughness and perseverance “paved the way for equity and inclusion in sport” in Haliburton.

MacNaull laced up her skates and hit the rink with the Haliburton boys PeeWee team in 1977. There was no girls team – but that didn’t stop her.

“I really wanted to play hockey, so my dad made it happen,” said MacNaull. “Some parents on the Haliburton team and the teams we played against weren’t overly excited to have a girl on the ice.”

She quickly became a star on the team – a right winger with a knack for scoring goals and leading the team to wins.

“I did score a lot of goals – because I was good, I was definitely accepted a little bit more,” she said. She still often sees former teammates in Haliburton.

“I have fond memories of that time,” she said.

During high school, she dived into track and field – helping her 1,600-metre relay team reach the OFFSA championship.

In university, she joined the track team and advanced to the national university sports championship

But after realizing McMaster had a women’s hockey team, she decided to hit the Ice again. She found a pair of skates and borrowed some equipment. She tried out for the varsity women’s team – and made it.

That meant balancing three varsity sports alongside her academics: “I liked keeping my days busy,” MacNaull said with a laugh. Later, she narrowed her sporting focus.

“In my third year, I just focused on hockey,” said MacNaull. She became the team’s leading goal scorer in 1987-88 and was named MVP. While studying for her Bachelor of Education at Queens University, she helped the women’s hockey team capture a silver medal at the Ontario university championship.

After university, she played for both the Toronto Aeros and the Surrey Flyers in B.C. With both teams, she won provincial championships.

Despite leaving competitive sports to focus on her teaching career, she never left the gym, field or training pitch; she’s coached everything from basketball to curling.

“It just seemed natural to spend all that time at the gym and coach, so I did,” MacNaull said. “I kind of modelled myself after the teachers I had at the high school.”

Throughout her adult life, she spent summers and holidays in Haliburton. “Even in Toronto, I would always say, the Highlands is home,” MacNaull said. After retiring from her 32-year teaching career, she now lives in the County full-time.

She said she encourages athletes in Haliburton to take advantage of the positive community around them – a community that was so supportive of her growth as a hockey player.

“I think it’s really important that people realize, that even though Haliburton is a small community, that there are a lot of opportunities,” MacNaull said. “Particularly, the community coaches, the high school coaches; they formed who I am.”