Home Sports No holiday let down for Huskies hockey 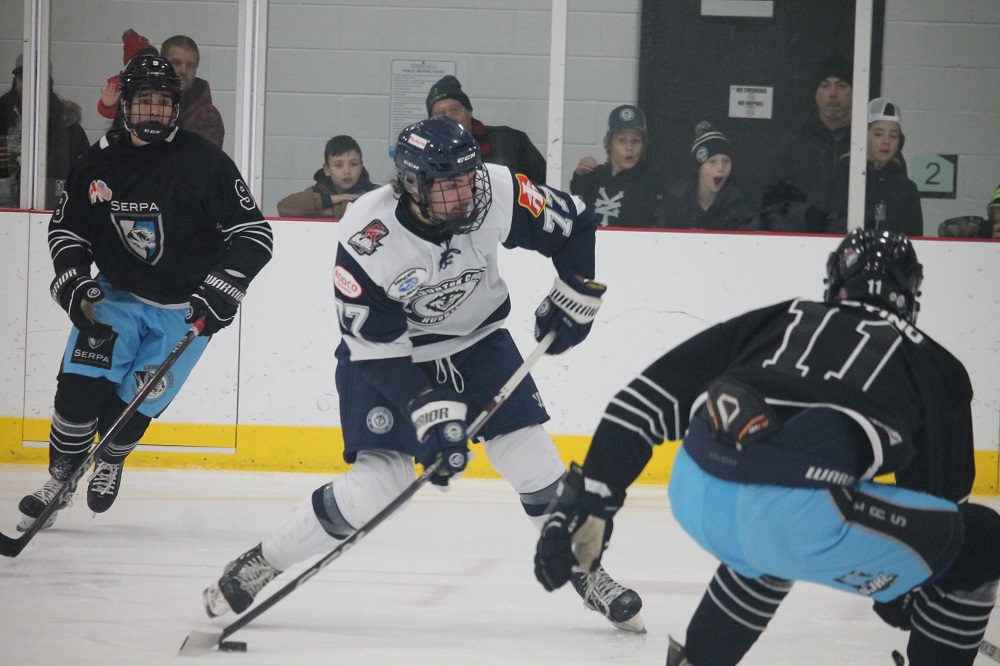 The Christmas turkey tryptophan didn’t slow the Haliburton County Huskies, as they thumped the Mississauga Chargers 10-1 Dec. 30. They followed that with a tight 2-0 victory over the Aurora Tigers in a New Year’s Day tilt.

Head coach and general manager, Ryan Ramsay, said he felt the players came back recharged from an 11-day game break.

“They had seven days at home. Maybe there is a small percentage of teams that see each other as much as we do. Sometimes it’s good to have a break. They don’t hear my voice and see their family and friends and sleep in their own beds. So, it was a good break. I think they needed it.”

The home victories keep the Dogs in second place in the South/East conference, still trailing the pesky Toronto Junior Canadiens. They boast a record of 25 wins, six losses, one tie and two overtime losses for a total of 53 points.

Against the Chargers this past Friday night, the Huskies were awarded the first powerplay of the game in the opening minutes and Boyd Stahlbaum got the goal parade started at 3:56 with helpers from Isaac Sooklal and Ty Collins.

The Dogs scored three more in less than two minutes. Patrick Saini from Collins and Christian Stevens at 11:11; Will Gourgouvelis from Jack Staniland and Saini at 11:46 and Zack Terry, from Stahlbaum and Luca Rea, at 12:55. It was 4-0 Dogs at the end of the first.

Mississauga got on the board early in the second period, with a goal by David Du Bois at 3:08, but it was all Huskies after that. Stevens scored at 6:21, from Sooklal and Saini; and Lucas Marshall potted one at 13:41 with assists going to Leo Serlin and Gourgouvelis. That made it 6-1 at the end of the second frame.

The Dogs came out snarling in the third with goals from Serlin, aided by Staniland and Marshall, Collins assisted by Stevens and Staniland, Alex Cunningham, from Riley Noble and Sam Solarino, and Staniland on the power play, with helpers from Gourgouvelis and Cunningham to cement the 10-1 rout.

It was a much stingier game on Saturday afternoon as Aurora braved the fog to travel north.

Collins scored in the first period from Saini to give the Dogs a 1-0 advantage. And, Cunningham added a second period marker, from Rea and Staniland, to hand the hometown squad a 2-0 victory. Aidan Spooner turned aside the 15 shots that came his way to record the shut out.

Ramsay said while pleased with the two points, he felt the team took too many undisciplined penalties and it is something they need to work on with just 17 games remaining in the regular season.

As he has said all season, he is looking for his team, “to start on time. If we play our game, we can beat anyone. Play 60 minutes. I know that is a cliché, but just show up. We have a really good team and we have big depth.”

He said it is about “playing Husky hockey” and not becoming complacent.

The team hits the road for four games; Jan. 5 in Caledon; Jan. 7 versus the Toronto Patriots; Jan. 9 in Cobourg; and Jan. 15 versus Wellington before returning home Jan. 21 for a 4 p.m. tilt against the rival Lindsay Muskies.