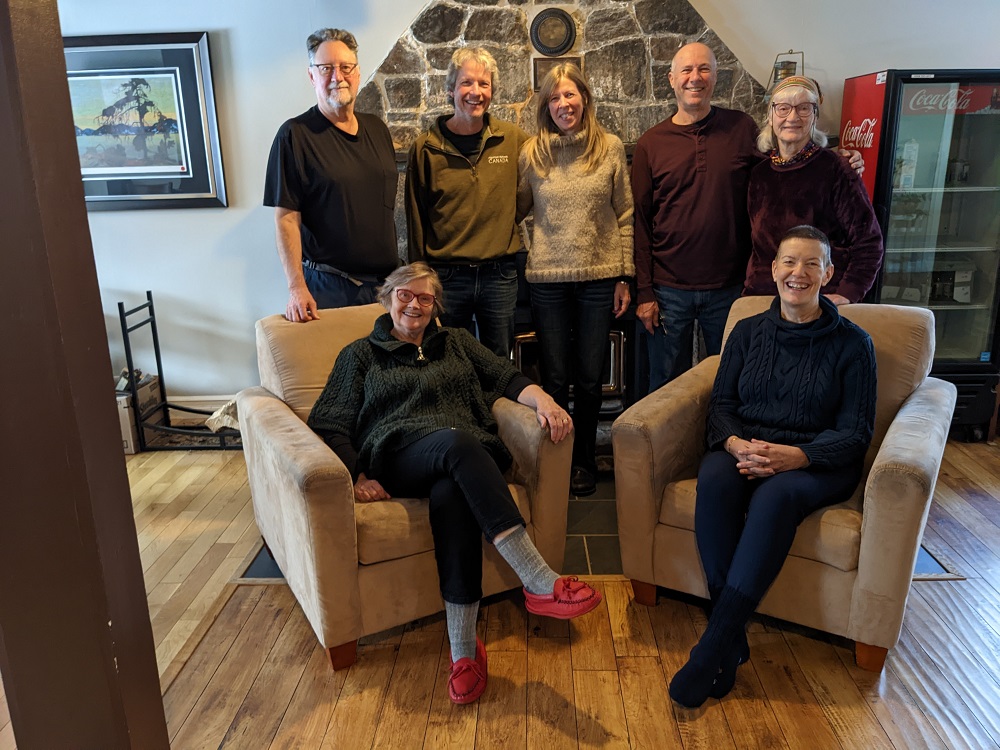 Haliburton County will soon have its own version of the Golden Girls – with Oakview Lodge and Marina getting out of the resort business and creating a co-living space on the shores of Little Hawk Lake.

While it’s not a story of four older women, since the occupants are varying ages and genders, Oakview Coliving is set to officially launch on June 1. There are already several people signed up to the venture.

Anna Schmiegelow and Greg Hebert bought the lodge and marina about seven years ago. Their plan was to own for 10 years and then to sell. They listed the property in May 2022. As interested parties stepped forward, Schmiegelow said she and Hebert took a step back.

“We realized that we weren’t really ready,” she said.

They then had a chance encounter with Doug and Mardi Tindal, who were in the Highlands visiting their son, daughter-inlaw and grandchildren. They came for a look at the lodge and Schmiegelow said the chat turned to co-living. The Tindals had attempted to get something going in the GTA for some time without success.

Seated in the lodge’s living room in front of a fireplace, Doug Tindal picks up the story.

He said, “everybody talks about living with friends. Everyone has had that conversation. But hardly anyone does anything about it.”

Mardi said it was on the tip of her tongue to say something to Schmiegelow at that first meeting. However, she and Doug returned to the GTA, gave it some more thought, and emailed the lodge owners.

Hebert said when they received the email, they asked themselves “hypothetically” if it was something they would be interested in. Turns out, it was. “There’s no downside, really,” Hebert recalls thinking.

Schmiegelow added that as lodge owners, they had learned to share their home over the past seven or so years. However, she said as tourists came and went, they would have temporary relationships but with a co-living space, “you actually get to develop more of a relationship. The fact that you can nurture friendships over an extended period and grow together. That’s kind of cool.”

Things moved quickly from there.

The four were joined by three others – Grethe Jensen, Hillary Arnold, and Ted Addie. They all agreed on a price and began hammering out the details.

Tindal said what’s different for them this time around is they had in the past looked to purchase and renovate property. Now, there are no modifications to be made, or, in other words, no financial surprises.

But the Tindals joke that their first list of priorities for co-living included things such as being close to the subway line or other public transportation and within walking distance of amenities. There had to be high speed internet. Anyone who’s been to the lodge knows these are not on the checklist, although Schmiegelow said Starlink has helped with the internet.

Doug added they were motivated to reduce their environmental footprint, too. There is already talk of shared cars.

Tindal describes the arrangement as, “it’s not a condo, but it’s kind of like a condo in the sense that you have exclusive use of your space and then you share the common areas.” He added unlike most condos it is not about maximizing profits.

Mardi adds, “the other secret sauce this time is Greg and Anna’s hospitality and enthusiasm for this concept has made all the difference.” She said it is about forging community, “which isn’t always easy, but worth it.”

Schmiegelow said their intention is to have their evening meals together. She said the kitchen table is always where the interesting conversations take place.

“And that’s where the details of this plan have already been thrashed out,” said Mardi.

But is co-living for everyone, they’re asked. They respond that on those days they want to be on their own, they have a private space. They also point to the extensive lodge and grounds, which have lots of private areas.

Doug said the model is a great example of how Ontarians can tackle the housing shortage and “municipalities don’t get to say who a family is.”

For them personally, they said they grew to love their trips to their son’s cottage. Living in Toronto during COVID also shifted something. They had lived in a condo there and assumed they would make community, but that didn’t happen.

“We moved there and put a sign on our door saying, ‘hi, we’re Mardi and Doug. If it weren’t for the pandemic, we’d invite you in for a drink. So, in the meantime, if you need a cup of sugar, just knock’,” Mardi recalls. She said within 24 hours, they were told no signs were allowed on the doors.

Hebert points out there was a commercial aspect to the arrangement since they’ll still run the marina and rent out a freestanding cottage.

Schmiegelow, who is in her 50s, said they also wanted people to know it’s not a seniors’ home or retirement living. They are open to like-minded buyers, no matter the age, but would prefer no live-in children.

“We are about 15 years older,” says Mardi. “We’re delighted to be engaged with people who are active in the world. We are too, but a little differently.”

So far, the four said their initiative has been welcomed. “Everyone that we know has been very supportive and said, ‘oh, what a brilliant idea’,” Doug said.

Hebert said they’ve worked on a guide to make it work. “We have quite a formal legal document that describes how to share title, but we also have a less formal, more conversational document about how we expect to interact with one another, how we’ll bring a new person in, meetings, conflict resolution, and other day-to-day stuff, right down to shopping. We call it the Trail Guide.”

Doug quotes a co-living friend who says it’s not about necessarily living with your best friends, but people you can tolerate.

But Mardi lifts the bar, saying “I am amazed, not shocked, or surprised, but delighted by how much we enjoy one another. And that will grow.” To find out more go to oakviewcoliving. com.