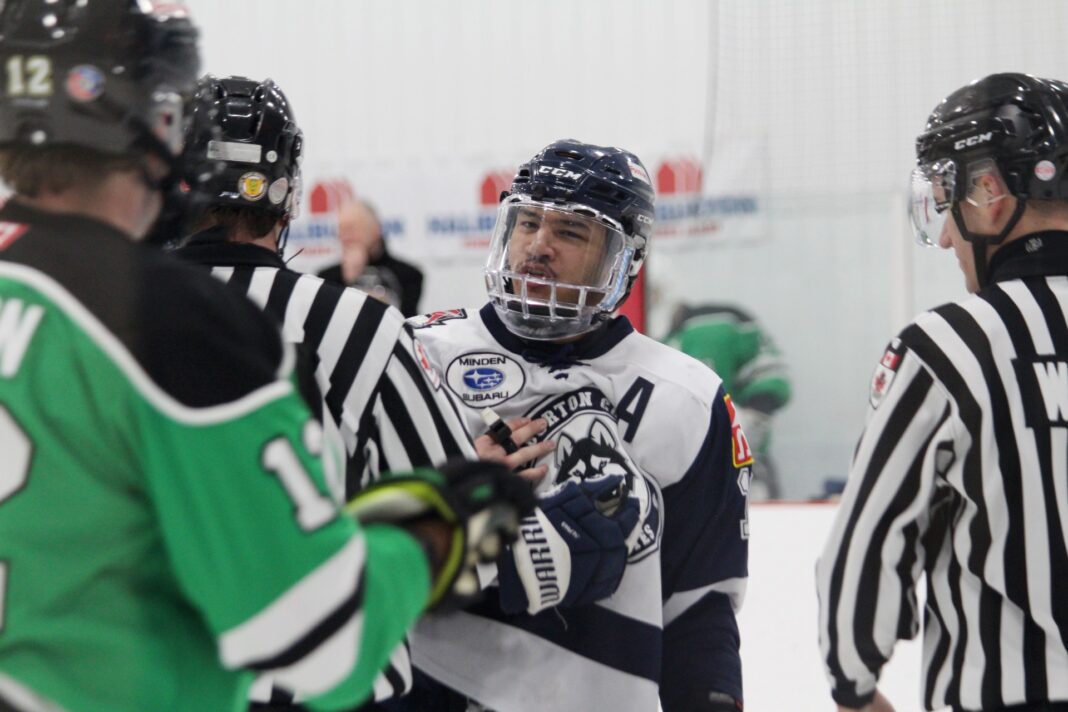 It only took a few minutes for the ice at the Minden arena to reach a boiling point Dec. 11, as the Haliburton County Huskies faced off with the rival Cobourg Cougars.

While the referees were kept busy with 27 penalties and plenty of fiery confrontations, the Dogs battled to a 5-1 win. “We wanted our players to respond,” said coach Ryan Ramsay.

He said it was a strong performance coming off the back of a tough 5-3 loss to the Trenton Golden Hawks Dec. 9. “I didn’t like the outing that we had on Friday night. So, it was a good response from our guys and obviously, it’s a good rivalry with Cobourg,” Ramsay said.

Six minutes into the first period, Boyd Stahlbaum and Isaac Sooklal picked up a deflected shot from behind the net, passed it to Marco Iozzo – a recent acquisition from the Milton Menace – and he slotted it past the Cougars’ goaltender.

Two minutes later, Christian Stevens intercepted a Cougars’ pass and flicked the puck up to Lucas Rea. With clear ice ahead of him, Rea turned on the jets and flicked the puck between the goalie’s pads, leaving two Cougars’ defenders helpless behind him. “Our identity is a lot of team speed and skill, with some physicality. There’s also a sense of familiarity playing with each other,” Ramsay said.

The Dogs exploited cracks in the Cougars’ defence for the rest of the game. Stahlbaum notched two more goals in the third period, alongside one from Rea, assisted by Lucas Marshall and Zack Terry.

Hockey wasn’t the only focus, however. Volunteers from the Minden Community Food Centre hosted a 50/50 raffle, toy drive and silent auction. After the game, kids had a chance to hit the ice with their Huskies heroes. Ramsay was disappointed with how his team started the game against Trenton.

“If we would have played the first or second period like the third period, we would have won,” Ramsay said of the squad’s away loss to Trenton.

After going down 3-0 in the first period, the Huskies battled back with two goals from Ty Collins and one from Stahlbaum. “You can’t just show up and play one period and expect to win… but good on [the team] to show some character and try to battle back,” Ramsay said.

The Dogs play at home against the Toronto Patriots Dec. 17, away against St. Michael’s Dec. 18 and ring in the new year back at the S.G. Nesbitt Memorial Arena with a tilt versus Aurora Dec. 31.