Home Arts A cocktail of bugs and beauty at Minden exhibit 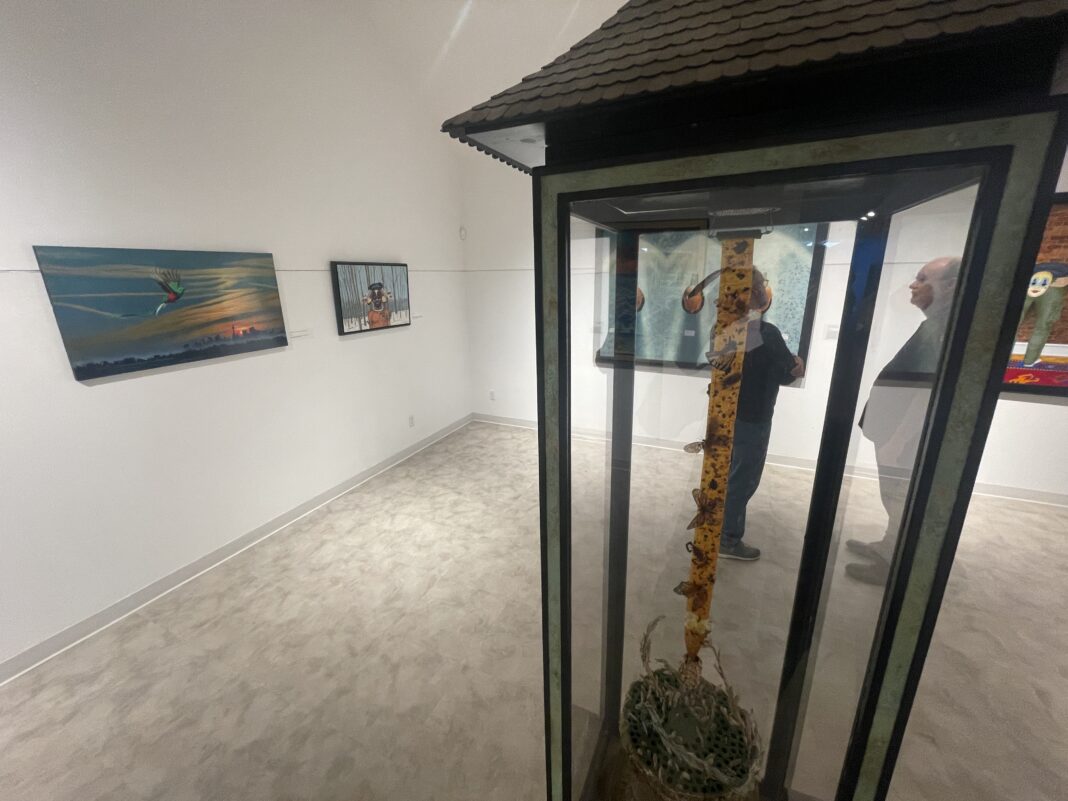 Who would buy a painting of a bug next to a pimple? Bob ‘Omar’ Tunnoch wasn’t sure. “A dermatologist,” he mused.

Family feedback, however, convinced the artist to sand down the canvas and paint a decidedly more inviting scene, Metamorphosis Martini

Like most of the oil paintings in Tunnoch’s exhibit, ‘The Muse, under the thin Blue line,’ on display at the Agnes Jamieson Art Gallery in Minden, the painting mixes natural life with human motifs.

A vibrant green caterpillar crawls out of a martini glass across from a fluttering butterfly, all rendered in high realism on a rich red wallpaper background.

“I want to make people aware of what’s out there, and how the whole world is integrated,” Tunnoch said.

Whether it’s a fearsome Cassowary bird, a Belted Kingfisher or a Lion’s Mane Jellyfish, Tunnoch said he’s fascinated by weird and wonderful inhabitants of our natural world.

“A lot of times people will look at [my art] and say ‘how did you ever think to make that up?’ And I explain that no, no, that’s a real thing,” he said. “Hopefully, it’s spurring some interest in them to go further and look at these things.”

Tunnoch combines these creatures with vibrant and unexpected human environments, whether it’s a frog peering from a China cabinet or a satanic Leaf-Tailed Gecko hanging above a microphone.

Much of his work also deals with the climate crisis that is posing an increasing threat to wildlife habitats and humans around the world.

Some who view Tunnoch’s work, such as Minden Hills’ manager of cultural services, Shannon Kelly, who introduced him to the crowd, point out that his compositions seem to raise more questions than they answer. Tunnoch relishes viewers’ interpretations.

“I have an imagination but what people come up with is unbelievable,” he said.

For instance, in one painting, The Last Supper, Conflict of Interest, a Mottled Owl and Frog-Eating Bat swoop toward a RedEyed Tree Frog on a Hercules Beetle. Behind them on a wall hangs a painting reminiscent of da Vinci’s The Last Supper. Only Jesus sits at the table.

“I was at another show, and (visitors) were saying ‘wow’ where are the disciples? They must have left. Maybe it’s because church attendance is falling around the world, maybe that’s what he’s saying.’ No I was just too lazy to paint them” Tunnoch said.

He said he hopes these visual cues and enigmas encourage people to look around more and absorb the species that make earth special.

“Instead of looking at your phone or something, look at the square footage of ground in front of you. There’s more stuff going on there that there ever is in your phone.” he said.

‘The Muse, under the thin Blue line’ is on display at the Agnes Jamieson Gallery until Dec.20.

Harp in the Dark – chapter 7: Heartbeat