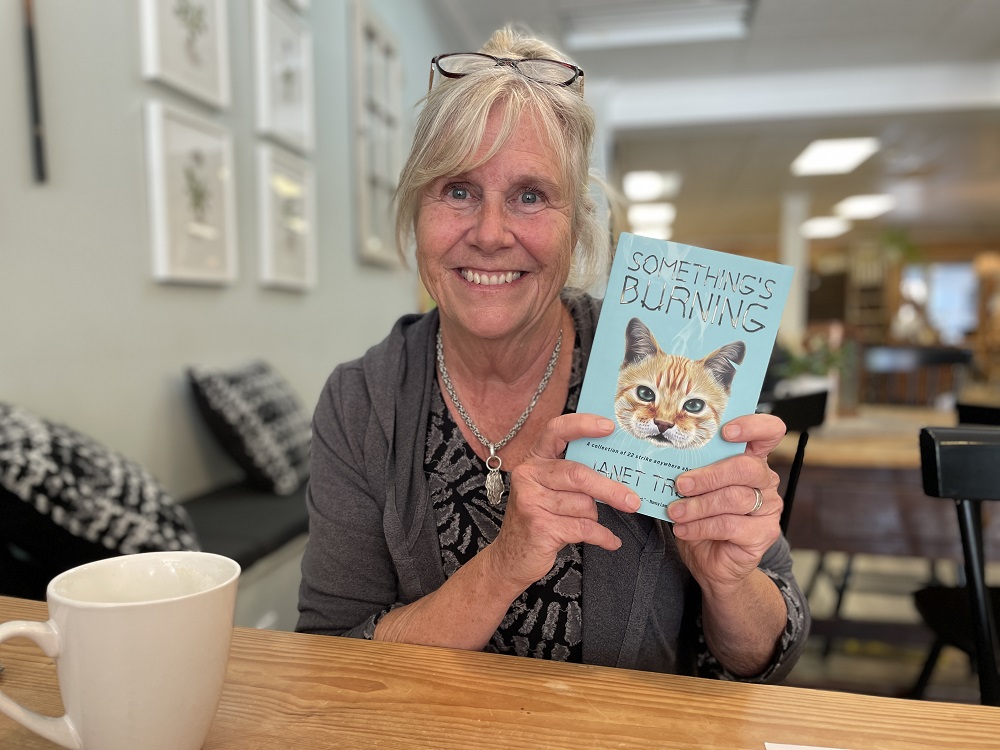 The strike of a match can change a lot. Sparks can transform houses into rubble, alter the course of life or devastate a community.

In West Guilford, author Janet Trull’s latest collection, Something’s Burning, 22 short stories deal with the past, present and society’s crackling changes. Each fictional story is organized into sections corresponding with a fire’s stages. From tinder – “You can’t start a story without an idea,” writes Trull – to a benevolent or malevolent inferno, to coals that smoulder and threaten to reignite.

Despite the name, the flames in question aren’t literal.

“It’s just an honest look at the way we are trying, right now, to understand the world,” Trull said. She added conversations with people spark ideas for her short stories. The spark leads her to follow the journeys of fictional characters such as Gerda, whose Holocaust experiences change how she views her family’s shifting priorities and fears.

“Her family had to hide under the floorboards when the Nazis came and so now when she looks at the struggles that her grandkids have, or think they have… she can’t really balance those things.”

While fire burns orange and yellow, the themes within Something’s Burning emerge painted in grey rather than black and white.

Gerda muses about whether starving to death because of a lack of food is better than starving to fit into ideals of beauty; Faye drives to Florida to find her dead friend’s lover, not expecting her role in the death to be re-examined; Carol, a teenager, lives with the aftershocks of a sexual assault and male violence, unearthing remnants of the traumatic event in the mud of her family’s farm.

A blaze can quickly turn devastating.

“The twenty-first century speeds ahead with fast-changing ideas about culture and identity,” reads Something’s Burning’s synopsis, “and a new choir of voices are telling their long-suppressed stories. Outdated belief systems are challenged. Society norms and hierarchies’ crumble. But fresh ideas cause tensions between generations, sexes, races and neighbours. The population is at odds about the revised script.”

Trull, who lived in Dunnville, Ontario before making West Guilford her home, has long written about life, culture and belonging in rural towns.

“I find it fascinating. You can have that barely suppressed anger once you go through town, but, you know, for the most part, people still work hard to be pleasant. And get along and help their neighbours and give gifts to the food bank.”

Something’s Burning, said Trull, often dives into one of life’s conundrums: how we balance joy and suffering.

“When I write essays for [The Haliburton Echo] on, say Thanksgiving, they’re heartwarming and we talk about making the turkey and the pumpkin pies and the grandkids running around,” she said. “But you know, every year there’s an empty seat at the table. So, there’s a sad side to all the stories. The food bank having a fundraiser but then the sad side is that people are hungry in this community. We have to have a food bank. I think there’s joy in life and sadness in life.”

Something’s Burning is published by At Bay Press and was released Nov. 1. It’s available online and in bookstores.