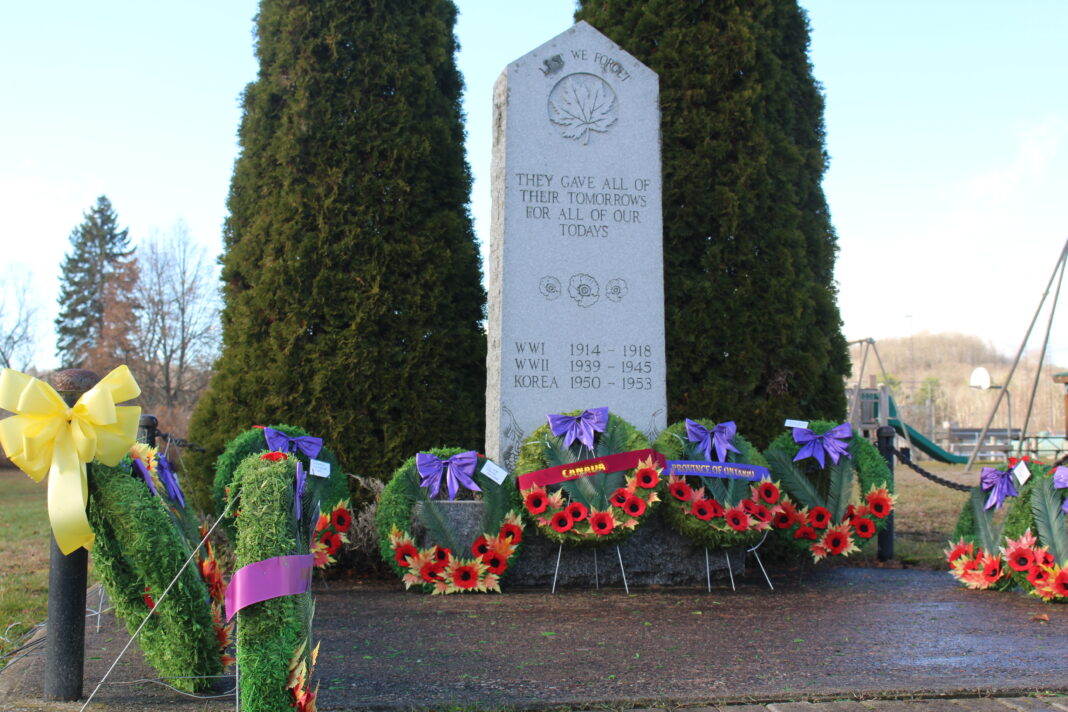 Remembrance Day is always a special occasion for Haliburton veteran Cec Bailey. The 98-year-old usually spends the day at the Legion, participating in the march to the Cenotaph on Highland Street.

Above all else, though, he remembers the sacrifices of his many fallen brethren who didn’t make it home from Europe all those years ago.

“It’s an important day,” Bailey said, proudly showing off a poppy stapled to the breast of his jacket. “It means quite a bit to me. To remember and pay my respects.” Bailey was just 15 when the Second World War began in 1939.

He watched as his older brother, Merrill, and several of-age friends enlisted to join the war effort. He would pen letters to those overseas, eager to hear what life was like on the front lines. Four years later, he followed in his brother’s footsteps when signing up for the Royal Canadian Air Force.

He completed basic training in eastern Canada, shipping out from Halifax, Nova Scotia in early 1943. He spent two weeks at sea before arriving in Scotland. From there, he made his way south to Bournemouth, England, where he underwent further training. He was assigned to be a truck driver, shuttling soldiers and equipment around at various airports and landing sites. “I drove a crash tender.

It could be very stressful at times,” Bailey said. He saw action in France, Belgium, the Netherlands, Denmark and Germany. He participated in the D-Day landings, June 6, 1944, in Normandy, an attack that helped turn the tide of the war in favour of the Allied forces.

Bailey said he has a lot of memories from his time during the war, but he doesn’t like to talk about it.

He became animated, though, when recounting Merrill’s experiences. A bomber pilot, Merrill flew in 19 missions before his plane was shot down by the Germans near the Dutch border in 1940.

He was one of only three survivors, though was captured and sent to Poland by the Nazis as a prisoner of war. “My brother was a hero – he helped to save one of his crew following the crash.

He endured a lot; he was a prisoner for five years.” He eventually escaped the camp, making his way back to northern France by foot.

Cec had long believed his brother dead, so it was an emotional moment when the pair reunited shortly after the Nazis surrendered in May 1945. “We didn’t see each other at all while we were in Europe, but we later found out that we were both in Germany at the same time – me stationed at an airport, and him making his way back from Poland,” Bailey said.

While Merrill was discharged and sent home to Canada, Cec still had some fight left in him. He volunteered for action in the Pacific arena and was preparing to ship out for Japan when the Americans dropped atomic bombs on Hiroshima and Nagasaki. The Japanese soon surrendered, bringing an official end to the war.

Admitting it was nice to return home to Haliburton, Bailey took a job with his father’s lumber business – W. Bailey and Sons. He worked there until his retirement in the 80s. Today, he lives at the Gardens of Haliburton seniors’ residence, overlooking Head Lake. “This is home… I’m glad to be home,” Bailey said.

Table was set for Matt Duchene to succeed at Nashville Predators