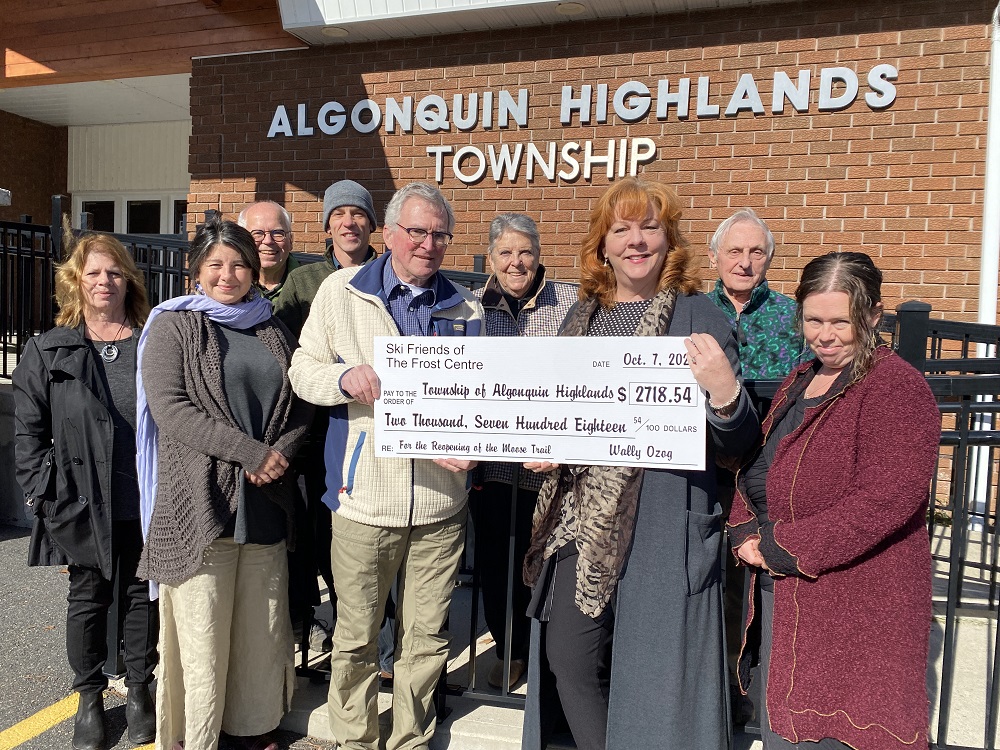 The Moose ski trail in Algonquin Highlands will reopen for the first time in five years this winter, thanks to a $10,000 donation from the family and friends of one of its greatest champions.

Before her passing in August 2021, one of Anu Lellep’s favourite things to do was strap on a pair of skis and head out on the trails surrounding her cottage near Kushog Lake. Her feats are almost legendary. Anu would often be out early in the morning and have completed a full circuit of the 26-kilometre trail around the Frost Centre before township staff had a chance to get out and groom them.

Together with her partner, Wally Ozog, Lellep helped form the Ski Friends of the Frost Centre in the late 1990s. The volunteer group maintained the trail loop for 14 years before handing the responsibility to the township in 2011.

Ozog was joined by Anu’s brother, Lembit, and several Algonquin Highlands staffers and council members Oct. 27 for a cheque presentation. Chris Card, parks, recreation and trails manager with the township, said the trail had been closed since 2017 due to safety concerns.

“Beech bark disease hit that whole trail loop very hard… what happens is the tree starts to rot from the middle out, so you can’t see how badly a tree is rotting,” Card said. “It gets to a point where the trees just started falling randomly. We tried to do trail maintenance and clear some of the dead standing trees, but those particularly are very dangerous. As a staff, we just didn’t have the experience to handle them.”

Card hoped to reopen the trail in 2018, forging an agreement with a forestry company to come in, fell the trees and then take the wood away, but after several years assessing the site, the company decided to walk away.

Following Anu’s death, Wally and Lembit knew they wanted to do something to both remember and honour her. They decided it would be “a really nice thing” to get the trail reopened for the community, with the Lellep family contributing $7,282 and the Ski Friends of the Frost giving $2,718. That money has already been put to good use, with 117 trees being removed from the site. Card said another 100 trees have been identified as problematic and will be taken down over the next couple of years. Work has also been done to prune the trails, repair a boardwalk and restore several drainage ditches and culverts.

“I know how dear the whole Leslie Frost ski trails were to my sister. I’m sure she’s looking down on us from somewhere now and appreciating this support.” Said Lemibt, who travelled from Zurich, Switzerland to attend the ceremony. A plaque honouring Anu has been placed at one of the warming shelters along the trail.

Card said the Moose ski trail should open up for sking in December.