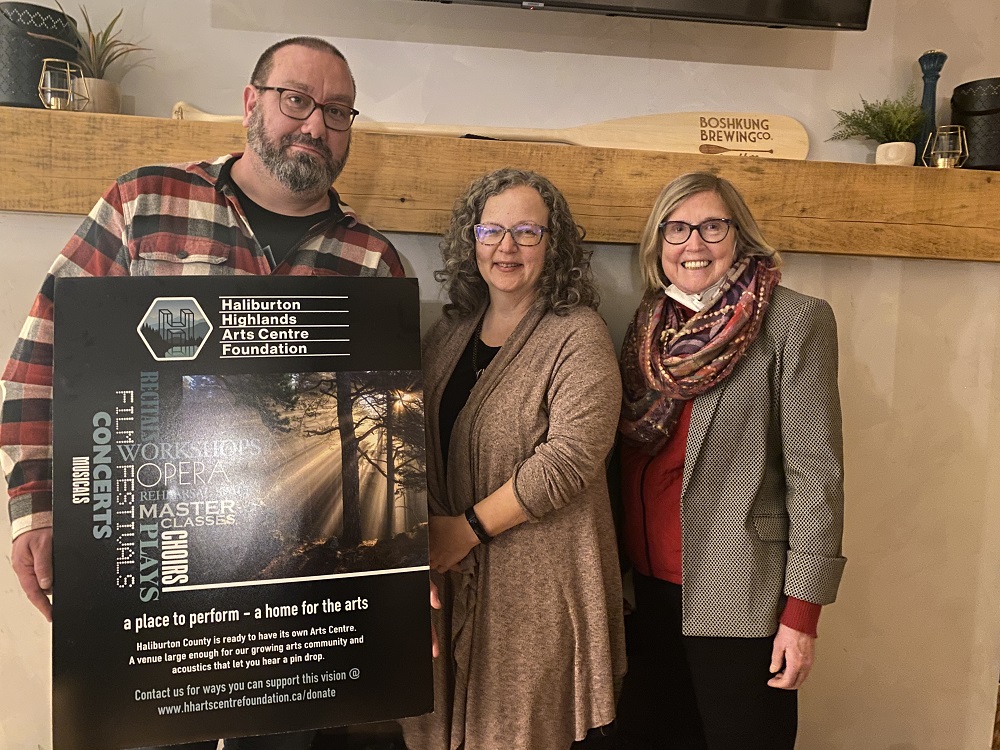 A new performing arts centre is feasible for Haliburton County, with initial work now underway to potentially bring a facility by 2027.

About 50 arts enthusiasts gathered at the Bonnie View Inn Oct. 27 to hear the news.

Conducted by consulting firm Janis A. Barlow & Associates, the feasibility study determined the Highlands could support a new centre with a capacity of 300 to 400 people.

Leading the presentation, Rebecca Cann said she had identified eight possible locations, with two unidentified areas, “meeting all criteria needed.” Cann felt it was premature to share those locations, but said they’re between Haliburton and Minden, have main highway access and are, or can be, fully serviced.

“There is some value in a site not being in a village. There could be an opportunity to strengthen the relationship between residents and communities,” Cann said.

In helping create a roadmap for the Haliburton Highlands Arts Centre Foundation (HHACF) – the group looking to bring a new arts centre to the County – Cann spoke to more than 300 residents and 24 potential user groups. She noted a “great desire” for a new space, which should have a performance venue, versatile rehearsal hall, professional backstage facilities, front of house lobby with concessions, administration space for future theatre management, extra offices, music studios and educational space that can be rented out.

Any new centre would need to accommodate a variety of mediums, including acoustic music, opera, film, musical theatre and dance. A proscenium lyric theatre with a pit has been discussed, with a 300-seat main level orchestra and a 100-seat balcony.

The new venue would not replace the existing Northern Lights Performing Art Pavilion, at Haliburton Highlands Secondary School, but complement it.

“Even if this new space is built, Northern Lights is not going to go away. It still serves a purpose in the community, and it can continue to contribute,” Cann said. Many user groups reported difficulties and concerns with the pavilion, including limited access, poor noise control, insufficient stage size and backstage facilities, and lack of seating, at a maximum capacity of 226.

Cann presented a potential budget, saying HHACF would need substantial buy-in from the municipal, provincial and federal governments. She said the group could apply for grants, but fundraising would be required, too. She did not provide an estimate, with HHACF chairperson Dan Manley saying a figure will be made public later this month.

Cann based her budget on HHACF developing a program with professional shows by traveling troupes. She estimated annual running costs for payroll, occupancy and programming at $800,000. She expects the venue to recoup around $650,000 through ticket sales, rentals and concessions, with the remaining $150,000 from donations, sponsorships and grants.

She said HHACF could bring in more than $1,000 every day the theatre is rented, recommending a $700 flat daily fee and an additional $1.75 per seat.

“This is a lot more than performance groups are used to paying right now. But, for this to be feasible, you’re going to need to charge [at least] $1,000 per day.” Cann said the new arts facility could generate around $1.14 million annually for the community.

The HHACF has secured the Peterboroughbased Dennis Group to complete a fundraising study, with work ongoing. Conversations will now proceed over a potential location. If they can find the money, Manley said it will likely be three to five years before they can get shovels in the ground.

“It’s exciting, because I think this project is good for our region. Haliburton County is at a tipping point where there’s lots of great things about to happen. This is just another piece of the puzzle to attract more people and businesses to the Highlands. We want to give people an opportunity to do more things here, to see more and not be forced to go out of the County.”