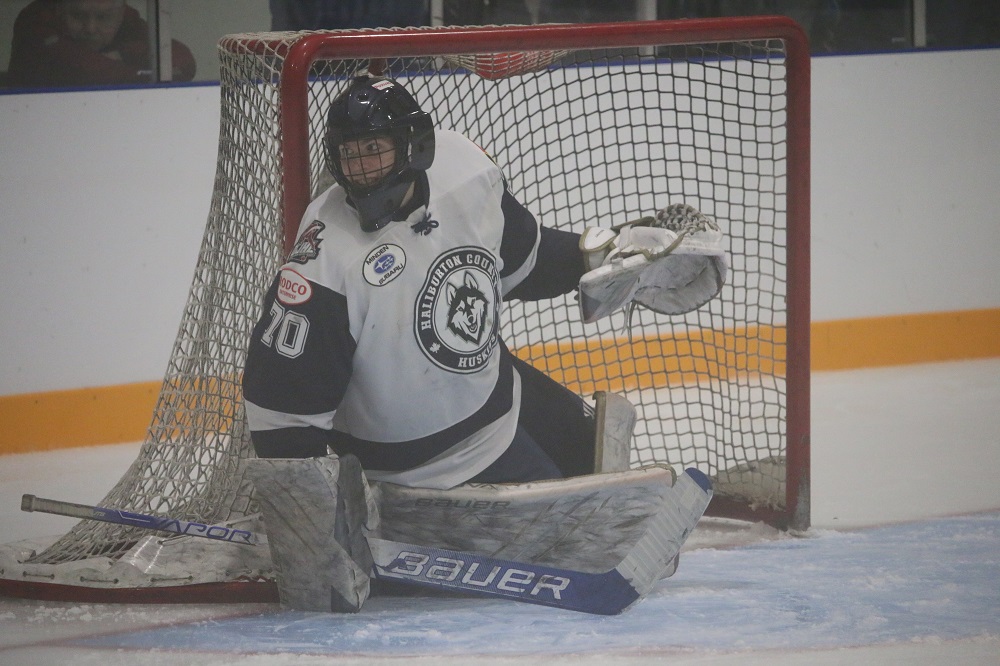 It’s been a mixed week for the Haliburton County Huskies, who maintained their place atop the OJHL South/East Conference standings despite falling to a pair of shock defeats.

An intense ‘Battle of Hwy. 35’ match-up with the Lindsay Muskies Sept. 16 resulted in the Dogs’ first loss of the season, falling 4-3 in overtime. The hometown team followed that up with a 3-1 win over the St. Michael’s Buzzers Sept. 17 at S.G. Nesbitt Memorial Arena.

The team traveled south to Cobourg Sept. 19 to participate in the OJHL Governors’ Showcase, where they kicked off proceedings early on day one with a 6-2 routing of the North York Rangers. A tilt with the Toronto Patriots Sept. 20 ended badly for the Huskies, dropping a 3-1 decision against the previously winless side.

“We played a lot of hockey over the past week, four games across five nights and I think that caught up with some of the guys,” said head coach and general manager Ryan Ramsay.

Friday’s contest with the Muskies was a back-and-forth rollercoaster with both teams going hard for the win. Young forward Taylor Barnett fired the Muskies into an early lead nine minutes into the opening period. Huskies blueliners Will Gourgouvelis and Isaac Sooklal then took centre stage – Gourgouvelis tying the game with a ripper from the point at 14:23 after being teed up by Sooklal, and then Sooklal blasting in the go-ahead goal at 15:42, assisted by Gourgouvelis.

Boyd Stahlbaum and William Everson hit back for the Muskies during the second, with Sooklal scoring again in the final frame to send the game to overtime. Tempers flared during the extra frame, with Myles Perry receiving a five-minute major after he appeared to kick a downed Muskies player after the whistle. He subsequently received a four-game suspension.

Stahlbaum was the eventual hero, giving the Muskies the win 3:42 into the overtime period.

The Huskies were relentless the next night in Minden, racing out to an early 2-0 lead against the Buzzers courtesy of goals by Alex Cunningham and Ty Collins. Bryce Sutherland provided the away side with some late hope, potting at 18:34 during the third before Christian Stevens added an empty netter for the Dogs.

A slow start to Monday’s tilt with the Rangers landed the Huskies in hot water, with the hometown team finding themselves two goals behind early in the second period. Six straight goals powered the Dogs through, with Cunningham, Collins, Patrick Saini, Sam Solarino, Jack Staniland and Josh Sordo all getting on the scoresheet in a 6-2 win.

The Huskies made a promising start to Tuesday’s early morning game with the Patriots, Gourgouvelis scoring at 4:57 of the opening period. That was as good as it got for the Dogs, who gave up three straight goals en route to their first regulation defeat of the season.

“I think we just got outworked. It doesn’t matter how much skill and talent you have; hard work will beat talent if talent doesn’t show up,” Ramsay said. “That game [with the Patriots] is one all of the boys I’m sure would like to have back.”

The showcase was well attended by pro scouts, with Ramsay having conversations about several of his players.

“It’s not all about wins and losses, while we were disappointed with the result [against Toronto], there were spurts and periods were the players played really well,” Ramsay said. “For our guys to get recognized at an NCAA level and NHL level, that’s great for our program.”

The Huskies will be back at it this weekend with a road game against the Trenton Golden Hawks Sept. 23. The team returns to Minden Oct. 1 for a home tilt with the Wellington Dukes. Puck drop at S.G. Nesbitt Memorial Arena is 3 p.m.