Mike Grozelle runs his own construction business. He was an executive for the Royal Canadian Legion in Kinmount for six years, and also worked as a firefighter training officer and licensed mechanic. “I’m aware of the issues surrounding planning and building…I drive on these roads, we pay tax dollars here, I have lots of friends and family and I talk to a lot of people in the area.” He unsuccessfully ran for council in Ward 2 in 2018.

He said he heard amalgamation is “well in motion” in Haliburton County. “I want to know how the people of Minden are going to benefit from having just the one level [of government] so if it’s cheaper to run at one level, then we’ll take a look at that. Right now, I think we have bigger issues to deal with just here in town.” [Haliburton County is not in the process of amalgamating, however, specific township services are enhancing collaboration efforts to unify service delivery.]

He said amalgamating Haliburton County hospitals would mean too much travel time for patients to receive care, and doesn’t think it’s a good idea. He added that Minden Hills and the County should look at new ways of attracting nurses and staff to work in the Highlands.

Grozelle was on an affordable housing committee. He said there is provincial money available to finance housing projects, but it’s difficult to access or negotiate. He said the County or Minden Hills could look at purchasing land that could be developed. On the question of balancing ecosystem preservation with housing, Grozelle said it’s worth sacrificing certain environmentally protected areas if there is a high return on housing options.

He said bringing new businesses to Minden is key to increasing prosperity. He said council’s role is to make it easier to develop new businesses. Specifically, he said this could mean encouraging the planning department to devote staff members to speed up business developments. He said that process could start by having an independent review of why certain planning files have taken so long to get processed, such as the Rockcliffe.

“I don’t think it’s clear enough what you can and cannot do.” When asked to specify, Grozelle said he’s worried neighbours will end up calling enforcement officers on neighbours even when they’re not breaking the rules, for example cutting down dead trees. “I don’t think we have to hire bylaw enforcement officers. I think we just need to educate them and most people… they want to comply with the rules.”

He said property owners should be responsible for controlling noise and other issues surrounding their short-term rentals. According to Grozelle, cottage rentals likely aren’t the reason long-term rental options are so hard to find since cottages are also used by their full-time owners.

“There has to be something but I’m not sure that we have to do it at the municipal or County level, the problem being I don’t think the ridership is there. So, it would have to be funded by us almost completely.” He said there are “far bigger” issues the township must deal with.

He said he wants “people to trust us again.” He said bringing new industries to town is a must in order to keep Minden Hills’ population from dwindling. He said the first step in streamlining processes in order to attract new businesses would be talking to staff to find out what issues can be solved. Grozelle said he believes councillors are currently not allowed to speak with staff. He has not asked councillors or staff if that’s true.

He wants to see people trust Minden Hills council. He believes there is a lack of transparency around some financial decisions, such as a Wessel Road cattle grate, which was quoted at more than $250,000, but ended up costing around $45,000. Staff delivered a public report on why the grate ended up costing a quarter of the price in spring 2022. Grozelle said that’s an example of when Minden Hills should award tenders to local businesses. “I want to make sure the taxpayers know what we’re spending the money on, where the money is coming from, and why we’re spending it. I want to see those jobs awarded to people here.” He did not specify how he’d communicate capital spending to taxpayers differently than Minden Hills’ 2022 budget did.

“The heart of the campaign is getting transparent and gaining the trust back. That, to me, are the two main things. If we’re going to make a decision as council, everybody in town should know what it is and why we voted the way we did.” He said he has fresh ideas about bringing new businesses and people to Minden Hills. 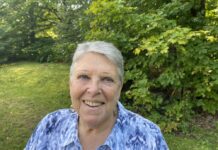