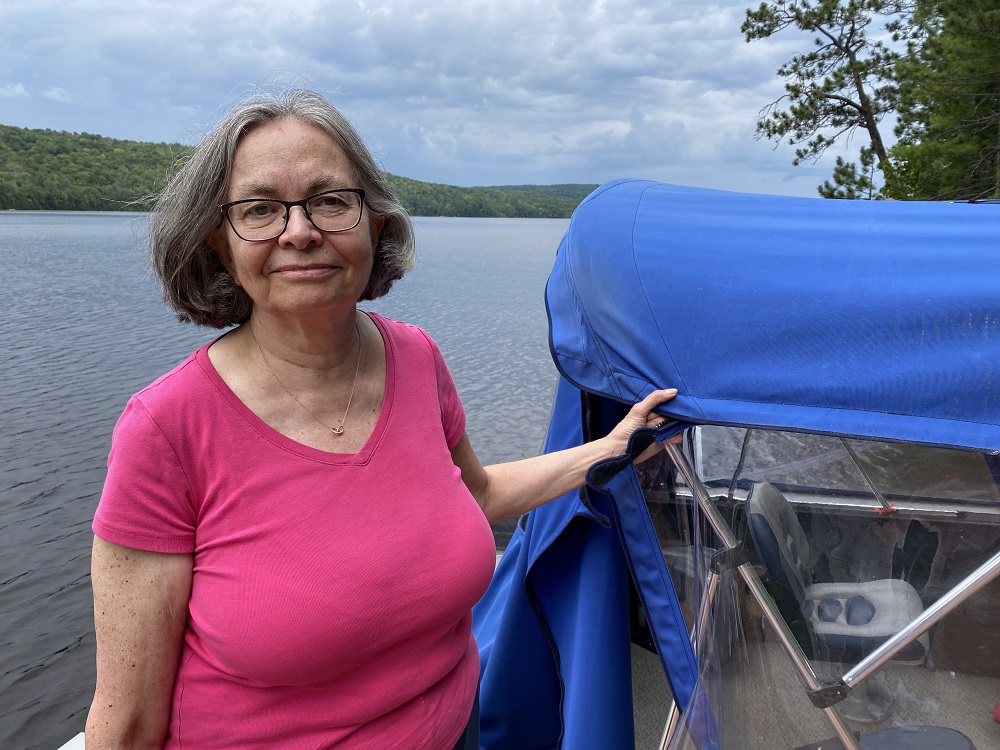 A small group of residents on Livingstone Lake feel as though they’re fighting for their future after being denied a permit by the province to construct a new private boat launch they would use to access their waterfront properties.

Karen Hammond has been living full-time in her cottage on the south side of the lake since 2006, but has owned the property for almost 30 years. Being water-access only, she has to take a boat whenever she leaves home for groceries, a medical appointment or to see friends.

For years she and neighbours James Schwartz, Amy McCarten and Mark Rooke have used a launch located on private property along Laurel Road to access their homes. Last year, the property owner issued them with notices stating he would like to cease their informal agreement. The owner declined to comment when contacted by The Highlander.

The quartet came together in the spring to file an application with Algonquin Highlands to create a new boat launch approximately 30 metres away from the existing launch. The application was supported by the township, which granted shoreline access and a proposal to install a floating dock.

Hammond said they also needed to secure an approval from the Ministry of Natural Resources and Forestry to install a driveway to the dock over Crown land. That application was rejected on July 7. Jason Lorbetskie, district supervisor with MNRF, told The Highlander the application was “not consistent with ministry regulations, policies and procedures”.

He noted this wasn’t the first time the ministry had rejected a proposal to create a new access point on Livingstone Lake.

The rejection has left the group scrambling, in particular Hammond as a permanent resident on the lake. Schwartz and McCarten say they have secured temporary solutions – launching from neighbouring properties that have road access, while Hammond has continued to use the private launch she’s always used.

None of those is a permanent solution, though. An appeal has been lodged with the MNRF.

Hammond said this is an issue that dates back decades, and that the fault lies with the province which, after selling the land shortly after the Second World War, failed to establish a private access point.

“We’re saying to them that they made the mistake in the beginning, now allow us to fix it,” Hammond said.

Lorbetskie has suggested the group use what he called “a public access point on Livingstone Lake maintained by the municipality” to get to their properties. According to Algonquin Highlands mayor Carol Moffatt, no such site exists.

“Algonquin Highlands manages 26 access points, but does not have one on Livingstone Lake,” she wrote in an email. “The access point ministry staff are referring to is actually an Algonquin Park access point for Dividing Lake. As such, our support of [the group’s] appeal is steadfast.”

Hammond said that site is a small launch on the other side of the lake, which people use to take out their canoes and kayaks.

“There’s no way we could use that, it’s far too small a site and there’s no dock there,” Hammond said. “We wouldn’t get approval to put one in, and even if we did the environmental impacts would be tremendous. This lake is fragile, having boats go back and forth from one end to the other, disturbing the wildlife and all of the property owners just isn’t a viable solution. We’re actually surprised the ministry, the ones who are supposed to be protecting the health of lakes, would suggest this.

“Everyone – the township, our neighbours – all seem to be in agreement that the site we’ve selected is the best fit that would have the least impact on the lake. We just need the ministry to get onboard,” she added.

Rooke told The Highlander he’s been using that launch area for several weeks and has had no issues getting his small pontoon boat in and out. He believes the site could work as a regular launch, providing the group received approval to install a dock.

Lorbetskie said the group’s appeal would be forwarded to the regional director for a final determination. There is no timeline for a final decision.

Hammond said the only thing she and her neighbours can do now is hope that the verdict is a positive one.

Finding a new use for an old church