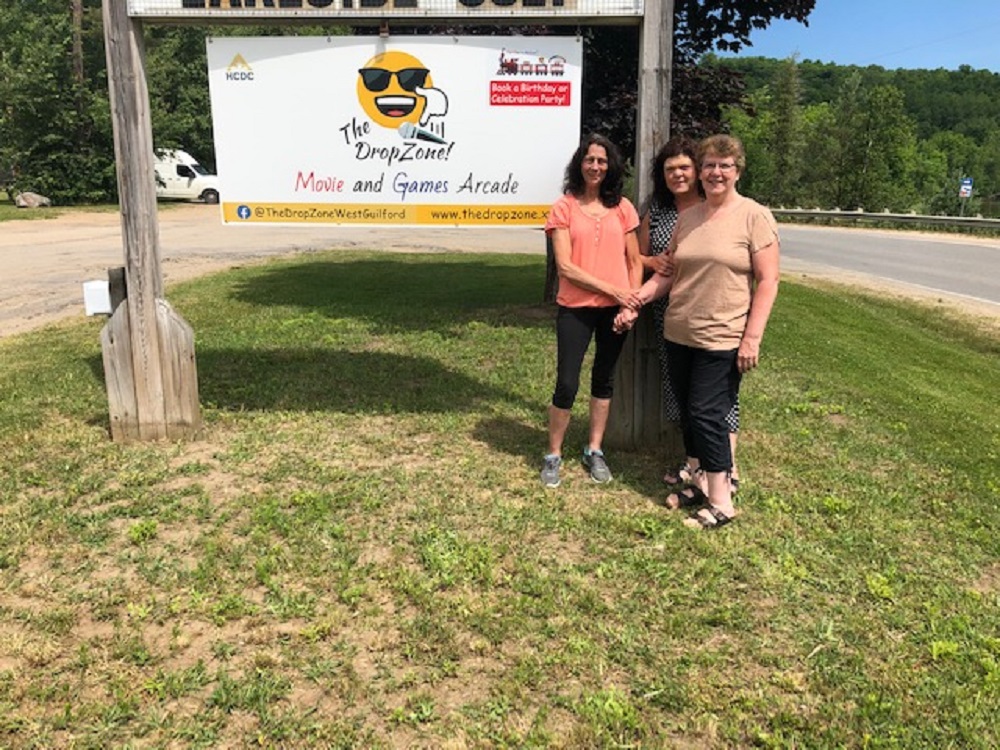 If you build it, they will come. That’s the mantra being used by three long-time County residents who have established a new popup arcade at the West Guilford Community Centre.

The Drop Zone will operate every Friday at the facility throughout the summer, with select Saturdays also on the schedule. Cousins Susan Bridge, Lynne Stamp and Cheryl Cooper have spent months building the operation after becoming disillusioned over the lack of children’s activities in West Guilford in recent years.

“We grew up here on Pine Lake and when we were kids there was a lot of stuff for kids going on here at the centre. Over the past year, we started talking and thought it would be great if there was more for children and families to do in this community… so we decided to make it happen,” Bridge said. “We started a non-profit called Families in Motion, and got to work on various projects and programs. The Drop Zone will be our first initiative.”

The trio received a $5,000 grant from the Haliburton County Development Corporation to help with start-up costs, and have invested an additional $5,000 of their own money.

The Drop Zone will debut this weekend, running Friday and Saturday from 4 to 9 p.m. Bridge says she’s expecting it to be busy. “There’s a lot of excitement. Everyone we’ve told about this has just been over the moon. I think it will be a great addition for our little community,” she said.

There will be various arcade-style games available, including brand new pinball machines. The team has also purchased air hockey and foosball tables, while there will be karaoke for the musically inclined.

Stations will be set up for younger children, with train and Lego tables planned for this weekend. There will also be an indoor putting green and floor curling, something Stamp hopes will encourage parents to stick around.

“We want this to be a very family-friendly operation, so we’ll have activities appropriate for all ages. We’re hoping that parents will not necessarily just drop their kids off, but join them and come inside to see what we have to offer.”

Each night at The Drop Zone will end with a movie, beginning at 7:30 p.m. This weekend’s offerings include The Emoji Movie, airing Friday, and The Batman, being shown on Saturday.

Long-term, Bridge says she and her cousins have big plans for Families in Motion. They hope to offer special events through another venture they’re calling The Celebration Station, where people can book equipment for birthdays and other parties. The trio also wants to establish various holiday camps in the future.

To mark their grand opening, Stamp says there will be face painting, door prizes and other giveaways throughout the weekend. Entry is $5 per person.

Nurse pivots from ER to aesthetics