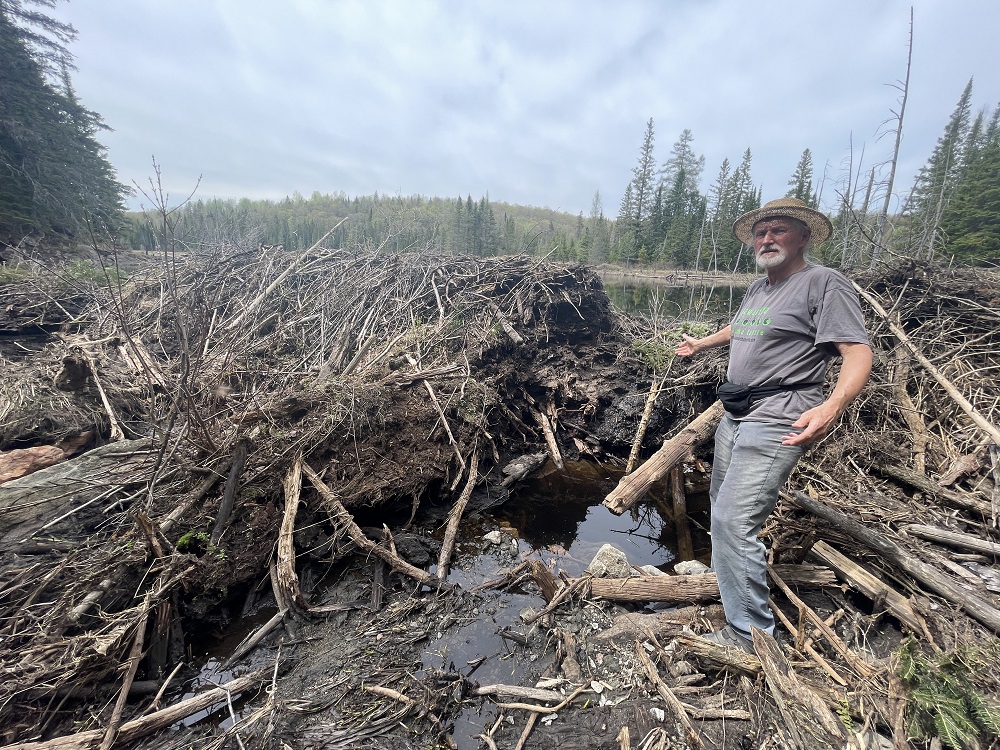 A beaver dam, draining a wetland in Highlands East, has been damaged, sparking concern for nearby endangered species habitats.

Landowners near Legacy Road first reported the damage May 8. The dam is on Crown land, though much of the adjacent wetland is on private land.

Photos captured by a nearby landowner, provided to The Highlander, show a person who appears to be extracting sticks from the top of the dam in late May. As of May 12, large piles of sticks appeared to have been removed and stacked on either side of the dam.

“I’m in shock,” said Robert Hood, a landowner on nearby Dillman Trail, when he first saw the damage. He and others suspect it’s a deliberate effort to lower water levels in the wetland to reconnect Legacy Road and Dillman Trail. “I didn’t think the damage was this bad. This has all the hallmarks of being done by a concerted group of individuals who have very little respect for wildlife in general,” Hood said.

The area above the dam is a Blandings’ turtle habitat, an endangered species, which means the damage falls partly under the Ministry of the Environment Conservation and Parks (MECP).

Ministry spokesperson Lindsay Davidson said “exactly what the person is doing cannot be determined from the photos,” but cautioned that intentional destruction of the dam could be a violation of the Fish and Wildlife Conservation Act (FWCA)

Previously, the MECP said “the ministry will follow up and gather information about the circumstances that led to the breach and determine whether the Endangered Species Act (ESA) applies. We are also working to determine who owns the property, so we can reach out to the property owner to obtain more details.”

It’s an offense under the Endangered Species Act to destroy the habitat of a threatened species, with penalties ranging from fines up to $250,000 or up to one year in jail. The Fish and Wildlife Conservation act is legislation falling under the Ministry of Natural Resources and Forestry.

Brian Alexander, an MNRF conservation officer, said he was unable to comment at this time.

Hood said he’s worried the lowered water levels clear the way for ATV traffic through the wetland. Fallen trees blocking the wetland have been sawed and cleared off the trail.

“Everything is fine except ATVs. They damage the environment. It’s a small group, but unfortunately, the bad apples ruin it for everybody,” Hood said.

The Haliburton ATV Association said it’s not aware of the situation. Previously, the association told The Highlander it was not pursuing trails in the area.

The Highlands East Trails Committee voted to request Highlands East approach the MECP for a report on the wetlands to see if the trail could be routed through the area.

“We will enquire about what, if any, provisions could be made for creating a multi-purpose trail from South Wilberforce Road to Legacy Road. With that information, we can proceed with planning to create walking trails, or more, as permitted,” reads the committee’s May 18 minutes. The next Highlands East council meeting is June 14.

Chair of the Trails and Outdoor Tourism Committee, Coun. Cam McKenzie, said it would be important to get an MECP evaluation of the area before pursuing trail options. “We’d follow that direction. It doesn’t mean we’d go ahead with a multiuse trail. We might go ahead with a walking trail only,” he said. The trail was previously considered in 2016, but put on hold due to concerns over protected species in the area, such as Blandings’ turtles in 2019.

A May 23 social media post from the Township’s official account read “preserve wetlands, protect turtles… wetlands purify the water that drains into our lakes, sequester carbon, provide habitat for many species, and mitigate floods. ATVs don’t belong in wetlands.”