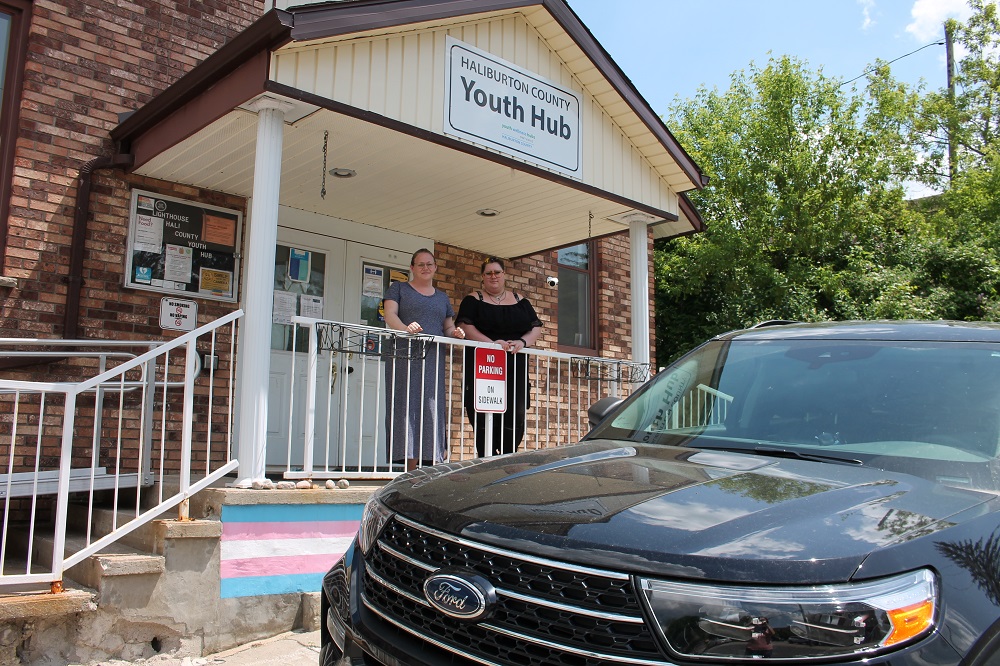 Youth hub employee Zee Weiss now has to rely on family or work colleagues to get to and from work in Haliburton.

Living on County Road 21 closer to Minden, it can be a juggling act and also restricts her from doing other things she would like to do while downtown.

Weiss is one of many looking forward to expanded transportation to and from the hub thanks to a $20,000 commitment from the County of Haliburton to a Point in Time-led pilot project.

Weiss said she can’t afford the cost of getting a license, vehicle and insurance and a cab ride would be $50 one way. Most days her mom drives her over the lunch hour but sometimes things come up “and I can’t get to work at all.”

The option for extended transportation “will be super helpful,” Weiss said.

Manager Mary Sisson said “it’ll be huge … for a ton of youth that don’t have transportation” and will provide more flexibility. For example, students can schedule all of their appointments for a day they know they can get a late bus.

Point in Time executive director Marg Cox made the pitch to council at a May 25 meeting, saying the money will go towards wages and benefits for a driver.

She said there had been a “huge” uptake for services provided by the hub, where youth aged 12-25 can get psychiatric, nurse practitioner and peer support, as well as have fun, to better protect themselves from risk.

She said they’d been able to cope with the demand by using a variety of strategies. One is buying a small fleet of vehicles for transporting youth. They have also partnered with the Trillium Lakelands District School Board (TLDSB) to run late buses from the high school and youth hub to take students home.

However, Cox said they are having human resource challenges and can no longer afford to have staff driving clients due to huge demands for their services.

She added the partnership with the school board “has been great but there are still a number of youth not on the late bus route that require transportation.” She noted one of the gaps is Highlands East and other areas that fall between late bus routes.

“There are still gaps that we see, that limit the amount of youth using these supports. The late bus only drops off at three locations, so most youth still need someone to pick them up from that location and they may not have transportation to do that. Many youth have expressed that they would access services and activities at the hub more or at different times and days if they had transportation. For example, on the Saturday that we are open or on Monday, Wednesday or Friday, when the late bus is not available,” she said.

“We are also aware that during the summer break there will be no opportunity to utilize the late buses,” Cox said. She said this will require the hiring of a dedicated driver, that in addition to providing youth hub rides and shuttles, could also help transport children and families to Point in Time’s offices in Minden and Haliburton as needed, as well as providing outreach.

Staff travel as far as Kinmount, Dorset and Cardiff and all over Haliburton County to provide outreach, she said, including food security, toiletries, and in-home appointments. She said staff often do the driving but there are limits as to what they can do.

County CAO Mike Rutter said this pilot project tied in nicely with a project recently approved for SIRCH to transport its trainees.

“The ridership/demand data gathered from this initiative will be useful in the future as County council reviews options with respect to transit service delivery,” he said. “This is another model which can be evaluated should County council provide that direction.”

Another bump in the road for Wallings Road development