Home Sports Huskies still in with a shot at first place 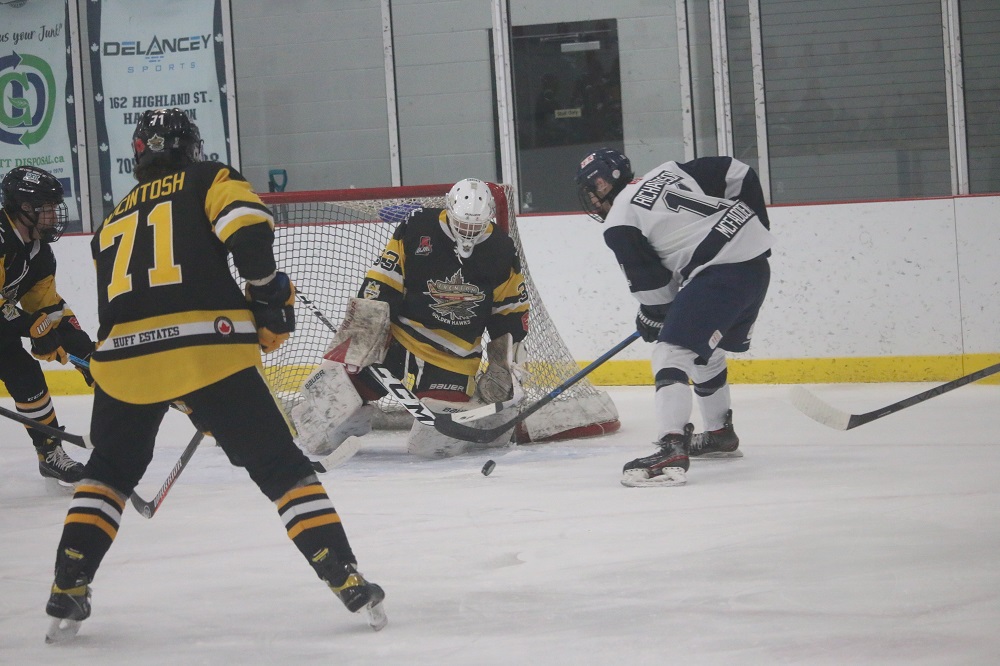 With just one week of the OJHL regular season to play, the Haliburton County Huskies find themselves in a three-way fight for first place in the East Division.

Boasting a record of 32-15-1-4, the Dogs are sitting in third place, one point shy of the Trenton Golden Hawks and three behind the Wellington Dukes. The hometown team matched up against those opponents this past weekend, dropping a 5-2 decision to the Dukes March 26 before rebounding with a huge 4-0 victory over Trenton the very next night.

It was a pulsating afternoon at S.G. Nesbitt Memorial Arena Sunday as the Huskies routed the Golden Hawks.

The game became more stretched in the second frame, with both teams desperate to get on the scoresheet. Bancroft again went close for the Golden Hawks, but it was 19-year-old centre Lucas Stevenson that grabbed the game’s first goal. A fine pass from defenceman Will Gourgouvelis found Stevenson in space in the high slot and he made no mistake, controlling the puck and firing low past Trenton’s Ethan Taylor at the 17:53 mark.

With the crowd still celebrating, Stevenson took a minor cross-checking penalty. A misplay from the Golden Hawks gave Cameron Kosurko a chance on the breakaway. While he missed the initial opportunity, Kosurko battled to regain the puck behind the goal, deked out two Golden Hawks defenceman and then bamboozled Taylor to score short-handed at 18:57.

“You don’t see too many goals like that. It was an unreal effort, Cam showed a whole lot of skill, determination and resilience on that play,” said head coach Ryan Ramsay. “It was a big turning point in the game.”

Simon Rose added a third early in the final frame, scoring just seven seconds into a Huskies powerplay. Nicholas Athanasakos added an empty-netter at 14:27 to close out the result.

Cicigoi was named first star of the game after a 43-save shutout.

“It felt good to get the win. We played a full 60 minutes and battled through some adversity. We took some penalties, but our special teams came up big for us, and the crowd again was a big factor tonight. It’s always great when we’re able to put in a good performance and send the fans home happy,” Cicigoi said.

Tough loss to the Dukes

Saturday’s match-up against the Wellington Dukes was a frustrating one for the Huskies. While the blue and white started the game well, back-to-back powerplay markers from the Dukes late in the first period slowed their momentum.

Christian Stevens brought the Dogs back into the game midway through the second, but the Dukes responded with goals from Jacob Vreugdenhill and Jonathan Balah to put the result beyond doubt. Local boy Ryan Hall potted a late consolation for the Huskies before Emmet Pierce grabbed a fifth for the Dukes.

Travelling to Mississauga March 29, the Dogs handily defeated the Chargers 8-2. Oliver Tarr got things going with a power play marker at 19:23 of the first. The blue and white exploded for five goals in the second, with Stevenson, Sam Solarino, Gourgouvelis, Athanasakos and Stevens all getting on the scoresheet. Jonah Cochrane added a seventh goal midway through the third, with Athanasakos rounding out the scoring.

The Huskies host the Chargers April 2, before travelling to Wellington for a potential first-place decider with the Dukes April 3.

“It’s interesting, you play so many games over the course of a season but everything seems to come down to the last one or two games. It definitely makes for great, exciting hockey,” Ramsay said.

While he thinks a first-place finish would be a huge achievement for the Huskies in their debut season, Ramsay said he didn’t see a great deal of difference between finishing top of the pile or in third place due to the strength of the East Division.

“We have the best division in the league, where anyone can beat anyone on any given night. If you look at all of our records, you’ll see a (mixed bag of) results,” Ramsay said. “But I know what these guys are capable of. We can beat anyone in this league if we play our game, so we’re going to head into playoffs confident, regardless of what happens [this weekend].”