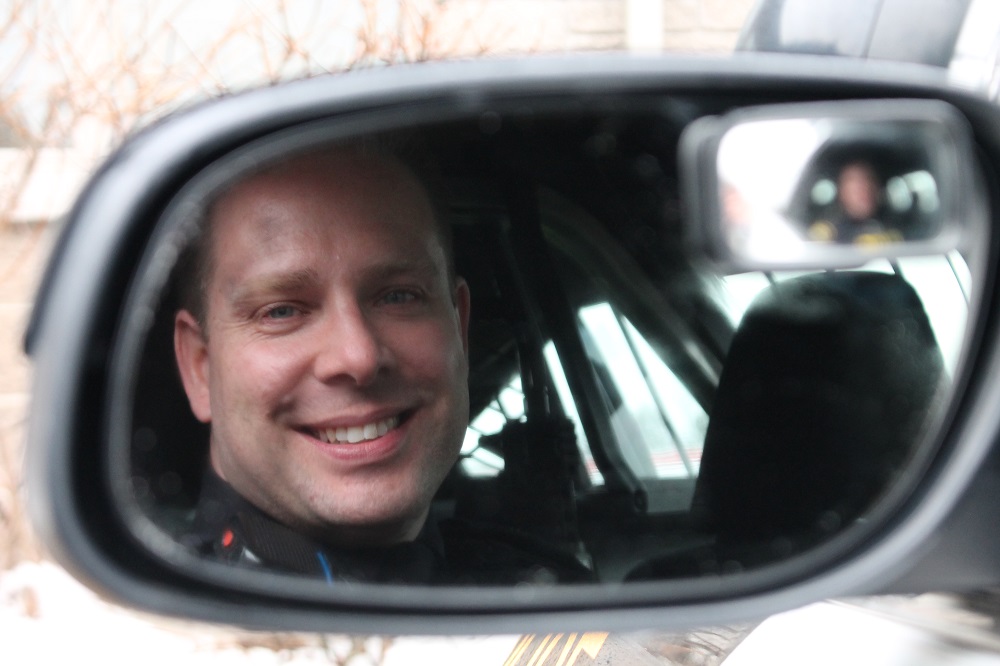 The phone call that would change Paul McDonald’s life came in the middle of the night.

When he was 18, the partner of his 22-year-old sister had tried to strangle her to death with a telephone cord, all because she had told him she was pregnant with his baby.

McDonald jumped in his car and drove the hour to his sister.

“That’s a devastating call to get at two o’clock in the morning,” McDonald says, his eyes welling up with tears.

It was bad enough his sister had been beaten. On top of that, he said the police who responded to the call did not demonstrate how he thought policing should be done.

He chooses his words carefully, since he is a 15-year member of the OPP.

“A negative interaction with an element of policing that is not how I want to see policing done,” he said during an interview at the Minden OPP detachment.

“From the get go, the officers that showed up asked her ‘why are you calling? What happened?’ The perception we got as a family, myself, my oldest sister, and my father, the whole time during that interaction at the hospital and police station with male officers and a female victim was that they were making my sister feel like it was her fault. Revictimizing the victim right at the onset of the call and not looking like they actually cared.”

It was a defining moment for the fourthgeneration police officer.

“I always knew I wanted to be a police officer. From an early age I just knew and after this incident with my middle sister, I knew I was going to try and do better than the people that came before me.”

McDonald, who works out of the Haliburton Highlands OPP detachment, has been nominated in the 7th annual Police Services Hero of the Year awards program.

Nominations came from a victim of a sexual assault who can’t be named as her matter is still before the courts; McDonald’s wife, Krystal McDonald-Smith, the father of a hockey player McDonald coached, John Salfi, and the family of a deceased accident victim.

“Because of you, I am able to fall asleep at night feeling a sense of security,” the sexual assault victim wrote.

Salfi refers to McDonald as an “amazing community role model” in his nomination.

Ben Middleton shares the story of his young brother’s death in a July 2015 car accident and McDonald going “above and beyond” with the family that night. “To officer Paul McDonald, as I write this with tears in my eyes and a very heavy heart, I need you to know that you made an incredibly horrifying situation better,” he wrote.

McDonald-Smith talks about her husband’s mental health struggles after many on-the-job tragedies. It led him to eventually become the mental health liaison officer for the mobile crisis intervention team out of Peterborough County. He was promoted in September 2021 as a sergeant out of Haliburton.

Did nothing for years

However, McDonald admits he did not take care of his physical or mental health for years.

He added like most police officers, he hid behind a badge of bravado, not sharing his struggles with his family.

“I became extremely distant and callous, withdrew and bottled everything up inside to protect them, it made me a worse person until my wife made me see the person I had become.”

The sexual assault case involving the unnamed woman triggered him.

“You don’t sign up to do this job to see death and decay and destruction. It takes its toll on you.”

He knew he needed help and went to counselling, which led to him becoming the mental health officer in Peterborough.

“I thought, if I can go and get counselling for myself and talk to people, then why can’t I do that for other police officers and the general public?”

He got healthier and it saved his marriage.

“Mental health is not talked about. Everybody hides it. Everybody has skeletons in their closet that they’re too embarrassed to show. But we go to the dentist for a broken tooth, we go to a doctor for a broken arm, why aren’t we going to the medical profession and counsellors for a broken mind?”

Through it all, McDonald said he has never forgotten how his sister was treated that night. He added he believes he has been gifted with emotional intelligence. He tries to bring that to every aspect of his life and certainly his policing.

He always asks himself, “If this happened to my wife, my sister, my father, how would I want the officer to be interacting with me right now?”

As for the awards nomination, he said he doesn’t do his job for recognition. He doesn’t care if he wins but the nominations have touched him deeply, especially his wife’s. “To say that I’m her hero really takes its toll. If it wasn’t for her telling me that I needed to wake up, I wouldn’t have progressed to where I am right now.

“I just want to help the most people I possibly can before I’m not able to do it anymore.”

The Police Association of Ontario award winners will be formally announced during the PAO’s annual general meeting in June.