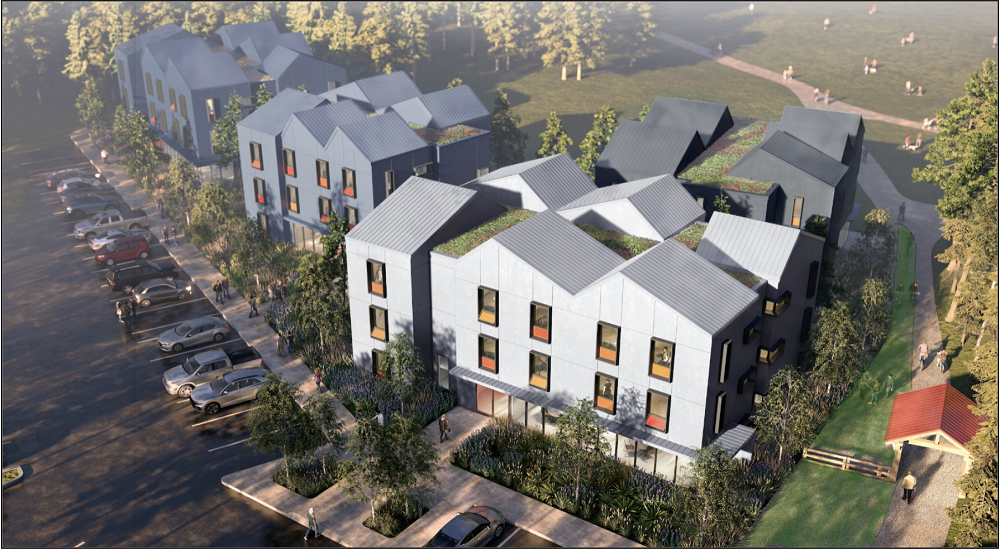 Dysart council and Fleming College officially got the ball rolling last week on a new student housing development that could one day provide accommodation for up to 94 people.

Slated for a 3.7-acre plot within Glebe Park, the development is to be completed in three phases according to Cal Brook, lead architect on the project. A first phase, pending site plan approval, will see the construction of two three-storey buildings, with a second and third phase each calling for one additional building.

Council signed off on rezoning the land March 25, with mayor Andrea Roberts expressing her excitement that a project several years in the making had finally come to council.

“It has long been a desire for the municipality and indeed the County to see a student residence here, which will only help the college to grow,” Roberts said. “This is a very exciting day for Dysart, and for Fleming College.”

Maureen Adamson, president of Fleming College, was in attendance at the virtual meeting. She said she was delighted the project was moving ahead, noting it was a major part of the institution’s long-term plans for the Haliburton School of Art + Design.

It isn’t quite full steam ahead just yet, however. While there seemed to be an acceptance that the development would go ahead, there are a few hurdles to overcome before construction can begin.

Construction set to start next year

Some of those concerns were raised during a public meeting last week. One local resident, Adam Brine, owns a residence at 34 Glebe Rd. While he said he was supportive of the project, he was concerned about Fleming’s plans to create an expansive parking system and the impact that would have on his home. Brine said he was worried the lights Fleming plans to install would be visible from his house. He asked if the college would plant evergreen trees along his property line to shield any light pollution.

Jim Blake, representing the Glebe Park and Haliburton Highlands Museum committee, raised concerns over a walking trail and snowmobile trail that will need to be redesigned should the project move forward. He also questioned Fleming’s plans for a new entryway, calling them “very awkward and unusual.”

After Brook confirmed Fleming was planning to use asphalt to finish the 196- space parking lot at the site, Coun. John Smith wondered if there was a better alternative. He suggested a permeable base would be a more ideal fit.

Susan Conner, Fleming’s project manager, said these concerns would be addressed in the coming weeks and months. The issue will be back before council later this year for site plan approval.

In discussing timelines, Conner said her goal was to complete 100 per cent of the design work for the project during the 2022/23 fiscal year. Pending council approval, she estimates construction on phase one could begin in late spring or early summer 2023. That initial phase is expected to take 18 months to complete.

Roberts said the project would fill an important need in the community, especially in light of the current housing crisis.

“There is no such thing as affordable housing anymore. Accommodation [in Dysart] is unattainable for someone trying to come here to go to school. It’s just not fair right now,” she said. “Without a student residence, I really feel the college could have gone backwards … This is a big win for all involved.”

Getting your car road-trip ready