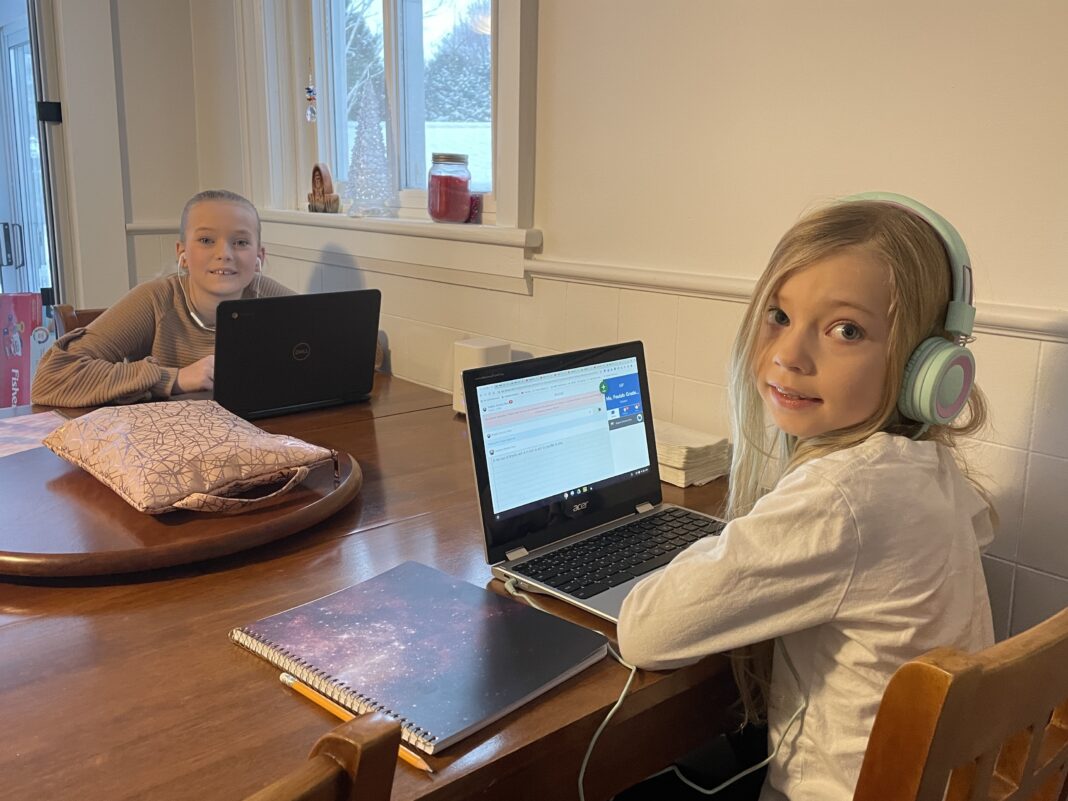 Haliburton resident Cody Sprague decided enough was enough last week, granting his two step-children an extended Christmas break after refusing to once again put them through the “torture” of online learning.

Attending Stuart Baker Elementary School for in-person learning since September, the kids – a five-year-old in senior kindergarten and a seven-year-old in Grade 2 – were among millions of students forced to revert back to virtual learning after Premier Doug Ford closed all schools in the wake of the latest wave of COVID-19.

It was announced on Jan. 11 that schools would reopen Jan. 17. Sprague didn’t know that when he pulled his kids. After watching his step-son struggle massively with virtual learning last year, he wasn’t prepared to let that happen again.

“He’s on the autism spectrum, so does need a lot of extra help and guidance. And he easily gets frustrated, which is compounded when he’s sat staring in front of a screen not really knowing what’s going on,” Sprague said.

“Sitting there on a computer, the kids aren’t involved like they would be in-person. It’s not interesting for them. It’s not engaging whatsoever.”

He said the methods used for virtual learning were akin to torture for young children, criticizing Ford for once again closing schools. “100 per cent schools should be open. They have everything in place. They wear their [masks] all day, they have social distancing, the cohorts. It should be safe,” Sprague said.

It’s not just young children who struggle to keep up with the demands of virtual learning, says Lisa MacPherson.

Her 16-year-old son, a Grade 11 student at Haliburton Highlands Secondary School, has seen his grades fall off a cliff ever since reverting to online in 2020.

MacPherson said she’s been forced to keep her son home since the onset of the pandemic due to people within the family’s immediate bubble being immunocompromised. “It’s definitely taken a toll. It’s been a struggle for him doing online because there’s very little help. He’s given his assignments and left to it,” MacPherson said. “When he was in Grade 9, he was getting 90s in math. His average now is around 55 per cent. This whole online learning has completely stunted his development.”

It’s a similar story for Grade 12 student Darian Maddock, who said he was “pretty down” about returning to school this week knowing he’d be doing so virtually. “Ninety per cent of my friends were like ‘great, here we go again’,” Maddock said.

The high schooler says he’s seen a significant drop in his grades, and an uptick in stress, since the province introduced online learning almost two years ago.” He said he’ll likely return to HHSS next year to retake classes with the hopes of getting better grades before pursuing postsecondary programs, if he wants to move on to post-secondary.

Maddock said he’d like the provincial government to know that “this really isn’t as easy as it is to say ‘oh well, kids can go back to online school for two weeks’. You’re ruining the flow of everything.”

Nicky Parish wishes her children had an opportunity to participate in virtual learning. Living just outside of Haliburton on Harburn Road, Parish said her internet service is so bad it won’t allow even one of her children to log in to their Google Meet stream, never mind all three.

In fact, prior to the pandemic, Parish didn’t have internet service at her home at all. Having initially been told she was located in a connectivity dead zone, Parish signed up for a $155 a month satellite internet package with Xplornet last summer.

Now, 18 months later, she wishes she never bothered. “It’s a disaster. It’s supposed to be high speed internet, I’m supposed to get 25mbs, but it’s impossible to run any streaming service,” Parish said.

Instead, her three sons, in Grades 5, 7 and 8 at J.D. Hodgson Elementary, have completed paper assignments whenever they haven’t been allowed to be in school.

That involved Parish driving to Haliburton twice a week to pick up and drop off work. It’s not a perfect system, but it’s allowed her children to keep up with their classmates. Issues have arisen whenever one of the kids runs into a problem they can’t solve.

“It can be difficult contacting teachers – if they have an issue with something, it’s all done through email. Then some of the teachers will call once a week to check in,” Parish said. “I have a learning disability, so I struggle and can get frustrated trying to help them. That can definitely lead to issues if we don’t hear back.”

It’s not all bad

Tiffany English has two elementary-aged daughters who thrived in virtual learning when it was introduced in 2020.

Now in Grades 3 and 7 at Archie Stouffer Elementary School, English said her kids have shined academically since returning to the classroom in September, something she owes to the “amazing” work of teachers carrying out virtual learning during the pandemic.

“They had great first report cards after being away from public school for so long, and now excel in some areas at school that they didn’t before we did the online learning,” English said. “For virtual, they are completely self-sufficient. This is very familiar to us, and the girls are excited they get to keep their in-school teachers. Things have went off without a hitch so far. “I would say both settings work for us,” she said