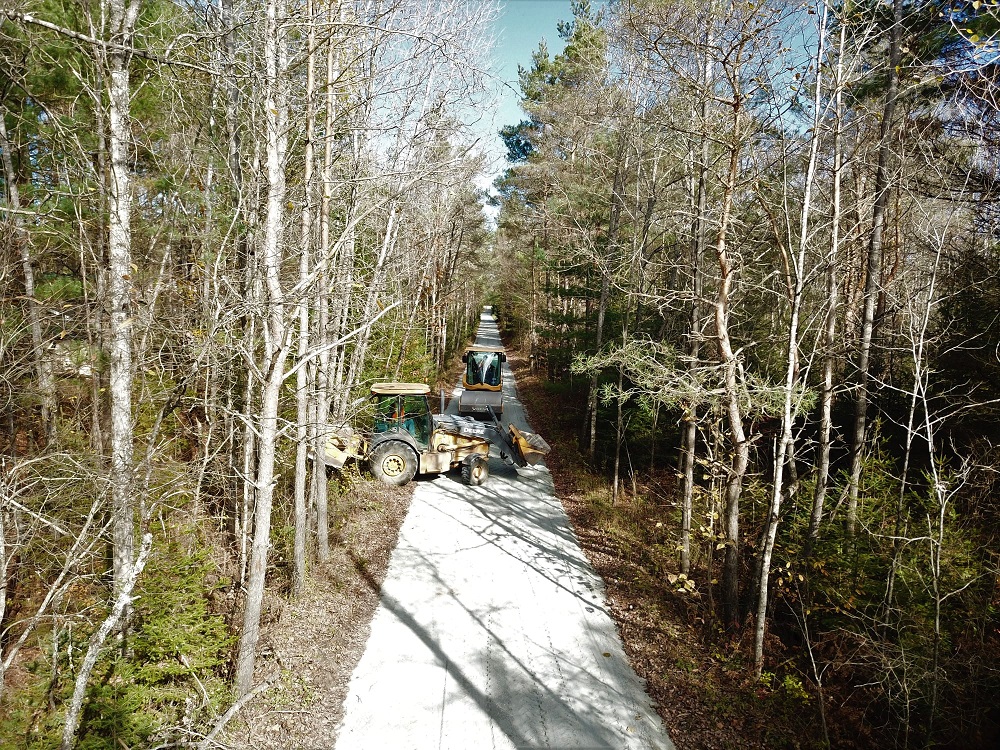 After checking out progress on the granite overlay, Enright said the club is “beyond excited.”

“From my memory it’s never been in this good a shape going into the season,” Enright said, mentioning how the smoother surface means sledders can ride with less snow and maintenance.

The cost of resurfacing 23.3 kilometers of trail totaled $232,751, funded by an Investing in Canada Infrastructure Program (ICIP) grant.

That left 5.7 kilometers of trail which Hawk River Construction is set to complete by 2022, funded by the County.

The County will spend an additional $42,390 to complete rail trail resurfacing this year.

In a report to council, director of public works, Robert Sutton, said that staff approved the extra work since the contract “is currently mobilized and time was of the essence.”

The report states granite screenings are “native to the County and as such they are in keeping with the natural setting of the trail as well as they are more environmentally-responsible and costeffective in comparison to importing limestone.”

Limestone is estimated to cost 23 per cent more than granite, and must also be trucked in from much further away. Sutton told council, “there’s a significant greenhouse gas effect” of importing the material.

“What we have in that section has so much sand in it you cannot ride a regular bicycle.” Roberts said. “It feels like you’re walking on a beach.”

Sutton said the surface should compact, and that staff “are looking at ways we can address a consistent surface.”

Also planned are $27,005 in accessibility improvements, including 15 stone benches and 500 meters of barriers.

Haliburton Highlands Museum director Kate Butler and Curve Lake First Nations representatives will consult on what culturally and historically important spots along the trail could be marked with signage.

The next Haliburton County Rail Trail round table meeting is scheduled for Thursday, Nov. 26 at 1 p.m.