Home Sports This reporter was hurtin’ in Haliburton 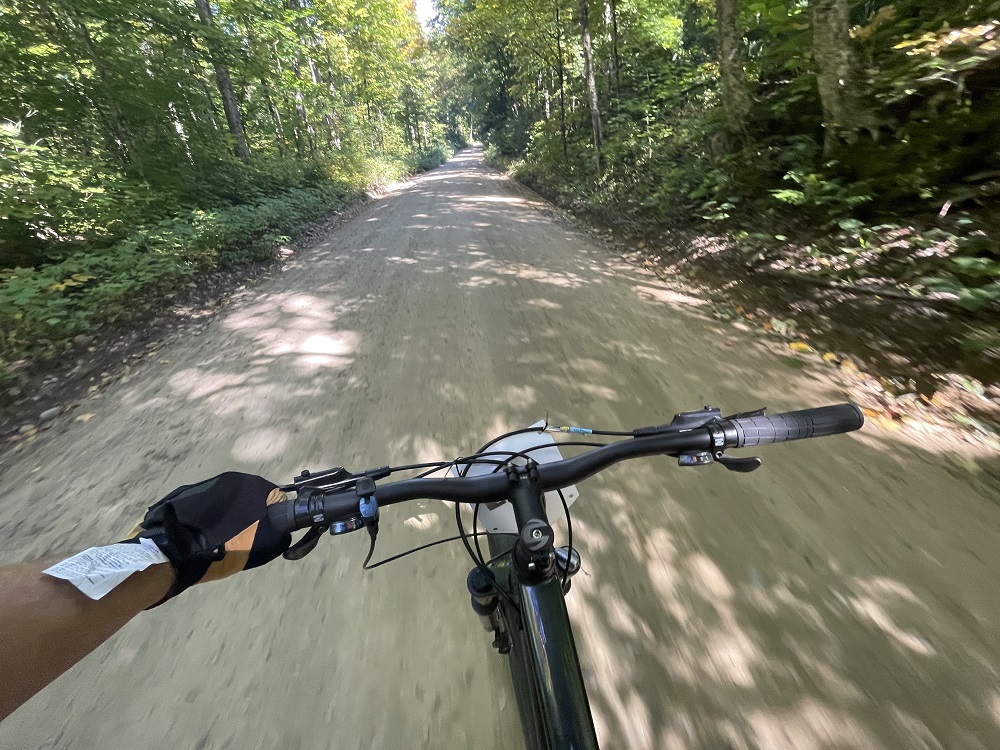 Two days before the annual 8 Hours of Hurtin’ in Haliburton race, I realized I had made some grave miscalculations.

The first was agreeing to organizer Marc Sinclair’s generous offer of a complimentary press entry to the now infamous gravel race around a section of Haliburton Forest trail.

The second? I had no clue what gravel racing was. There’s also the small fact I had never been in a cycling race, let alone one as long as my usual workday.

After frantically buying the bike shorts with the most posterior padding I could find, I googled “gravel racing” to find a whole world of tire specifications, carbon fiber racing cycles worth three times the price of my car and as many colour options of skin-tight lycra attire as there are Haliburton residents.

But as a reporter, my job is to find out the facts. Chase the story. Pursue truth, no matter the obstacles.

So I showed up with running shoes, a second-hand skateboarding helmet, a mountain bike and a hastily-bought bottle of Gatorade.

Under the sunny skies and swaying trees of The Haliburton Forest, I chatted with a couple of racers who were tinkering with their cycles or fuelling up on some strange sort of edible energy gel I had presumed only could exist in Star Trek.

As my solo men’s class rolled off the starting gate, I took up last place as the sunglasses and smooth-helmeted crowd sped off upfront. The trail, I soon found out, is beautiful. It curves around still lakes, flowing rivers, imposing pines and firs, steep rock faces and rustic cottages. There are also hills. Near the end of the first lap, my journalistic training had alerted me to the fact that yes, the event was aptly named. I was indeed … hurtin’.

Near the end of the second, my thighs made me feel incredibly empathetic for the experience of a tenderized T-bone steak.

Whether gulping down electrolyte powder, pedaling backwards to get help for a downed cyclist, reciting the entirety of U2’s discography or expanding my curse word vocabulary on each hill climb, I kept myself occupied.

Despite passing me so fast I appeared to be pedaling in place, nearly every rider offered encouragement as vibrant lycra-clad bottoms disappeared up the trail.

It was a race, but also a community event, and one that felt incredibly open to a newbie like myself. One kind racer, after a chat about leg cramps, tossed me two Gatorades and a bag of candy. “Electrolytes are the key,” he said.

It felt competitive, sure, but also like everyone was riding their own race; just doing it together. “That’s the thing,” said Sinclair before the race. “You make [the race] what you want it to be.”

For Hill or Haliburton local Nick Emsley, who placed second, this race was small potatoes: both are friendly competitors on marathon rides that can stretch up to 24 hours or intense short cycles jostling neck and neck with other riders.

“Shorter distance stuff, sometimes it’s more competitive but you go home and you find you didn’t do as well as you thought,” Hill said, after he crossed the finish, hardly breaking a sweat. He pointed to the field of riders packing up next to the finish line.

“But everyone who’s here right now has ridden their bike for eight hours. That’s a huge accomplishment.”

For Emsley, “when you get to the strategic part of it, the racing, it’s completely different,” than short races or mountain biking, which is his forte.

Emsley talked about drafting other riders, overtaking competitors and measuring your speed.

“You have to learn yourself and learn your body. When you train, all the hours you put in, you have to learn about yourself.” That’s what he’s spent years doing, as he pursues a mountain bike career that’s taken him to races across Canada and beyond.

For me? I finished off the day with more than one carbonated beverage and what must have been the most delicious hamburger in all of history.

I’ll spare you the details about my postrace condition but a basic understanding of human anatomy and bike seat ergonomics might give you a hint.

But will I be signing up for next year’s race?