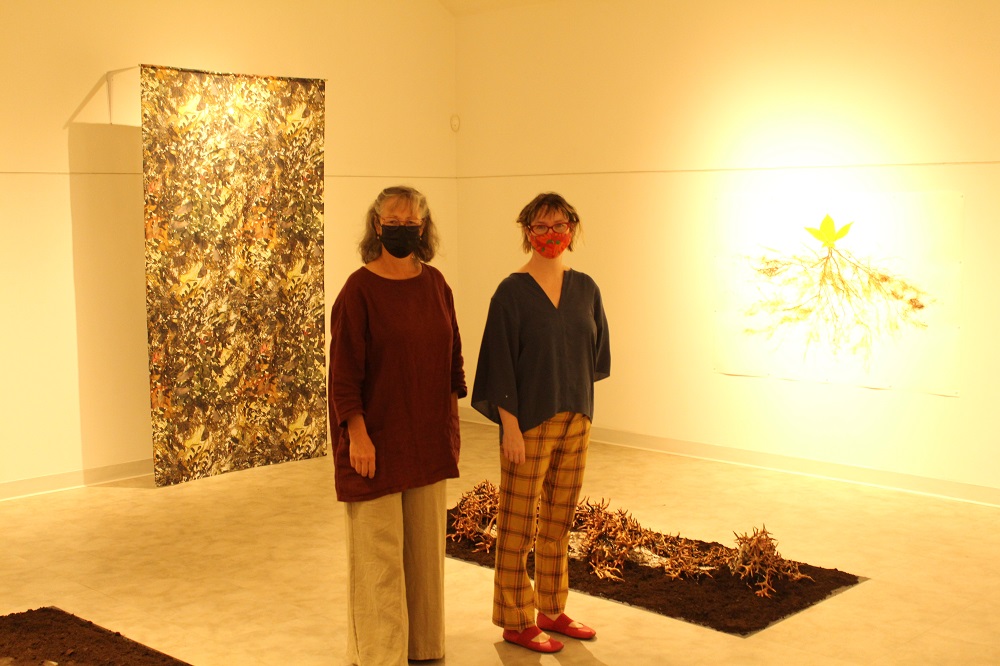 “We live in a culture that is not very comfortable with death,” said Barbara Brown, standing in a small room tucked inside the Agnes Jamieson Art Gallery in Minden.

Beside the photographer stands her collaborator, sculptor Cynthia O’Brien: around them the white walls are covered with small square photos and molded shapes, each representing a patient of longterm care homes who has passed away. Visitors are invited to write the names of their own deceased loved ones on scraps of paper and then slot them into niches around the room.

It’s just one part of their exhibit, Returning, a show in which both artists explore the beauty and sadness in death as they process their time working in longterm care homes.

“We worked in large facilities, 450 beds,” Brown said. “People died every day, but there was no conversation about it. There’s a taboo to dying.”

Returning plants that conversation in the natural world with photographs, clay sculptures; even dirt mounds shaped and hollowed out. In one three-dimensional work, So Below As Above, bone-coloured roots suspend a photo of a forest floor spread with dead leaves, clay shoots of new growth break the surface: death and life intermingled.

Many of the pieces, said O’Brien, are “imbued” with the memories of the people she got to know while working in long-term care. Aside from her work as a caregiver, her clay sculptures have been collected internationally.

“I think they’d be very happy that they’re there. They’re living on through me and through the pieces. I think that’s a good thing,” she said.

The show was first exhibited in 2018 at the Karsh-Masson Gallery in Ottawa. The two artists were co-workers when they realized the possibility of artistic collaboration. “We were talking about the projects we were working on artistically and found there were a lot of overlaps and what we were doing was based on our experience in long-term care,” said Brown. She has exhibited widely across Canada and taken multiple artist residencies as far afield as India.

“We were also interested in flowers, growing things, and how that nature-based idea is in both our work,” added O’Brien.

In the main room of the gallery, photos capturing the deep browns and rich greens contrast jagged roots of red, black and white. It’s a discussion of decay and growth, said Brown, as well as how memories of lost loved ones stay with us.

“There is beauty in all things. and even though we see something as sad, there is peace in that as well,” she said.

O’Brien worked in a care home during the COVID-19 pandemic. For her, it’s been encouraging to see people finally valuing, and noticing, the work and issues of care in the industry.

“The people I worked with are mothers and fathers. and we’re all going there too. They deserve respect and I think everyone should be directing their energies towards that,” she said. “There is a beautiful thing engaging in someone’s life to that degree, to be a part of their community.”

That sense of beauty, in all its pain and complexity, is what Returning explores. The show runs until November 27.

Host honoured for riding free on the airwaves

Harp on the Water: chapter 4 – The Curse