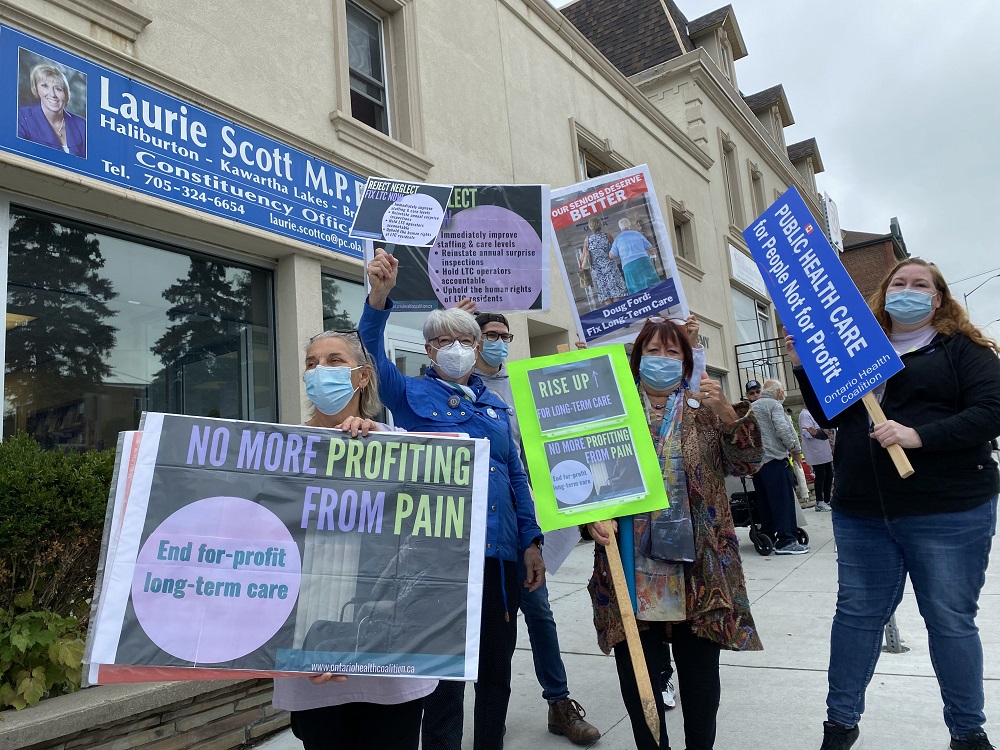 More than 18 months on from the formation of the Haliburton-Kawartha Lakes Long-Term Care Coalition, and the release of a report compiled by the Canadian military that described conditions within certain facilities in Ontario as “horrifying,” many local activists advocating for change in the industry have been left disappointed by what they perceive as a lack of action from the provincial government.

A protest held outside of Haliburton-Kawartha Lakes-Brock MPP Laurie Scott’s office in downtown Lindsay Oct. 4 drew more than a dozen people. Armed with signs, and launching sporadic chants of “our seniors deserve better,” those in attendance made it clear that they feel the Ontario government is failing residents currently living in long-term care.

Bonnie Roe and Lynn Ritchie, members of the local LTC coalition, made the trip to Lindsay to participate in the hour-long event.

“We feel it’s important to meet and collectively do this … it’s been over a year now since the military was called in to long-term care homes to assist, and, as we now know, they found appalling conditions in the places they visited. We’re here today … because nothing has really changed,” Ritchie said.

As outlined in that report, military officials experienced cockroach and bug infestations, seniors calling out repeatedly for help before receiving assistance, rotting food left unattended, COVID-19 infected patients being put in the same room as those who were healthy, missed meals, and seniors being left in soiled diapers and linens.

It also highlighted serious concerns over staff shortages, a lack of personal protective equipment, and failures to follow basic procedures to keep both residents and staff safe.

“Long-term care hasn’t been great for a number of years, but I think COVID shed a real light on what was really happening,” Ritchie said. “It made me personally realize that real change is needed.”

As a collective, the local LTC coalition has identified six core priorities it would like the Ontario government to address to improve conditions within the sector. High on that list is advocating for the inclusion of long-term care into the Canada Health Act, something Roe believes will completely change the way the sector operates.

The group also wants all LTC residents to receive at least four hours of direct care per day; reinstate annual resident quality inspections, with consistency in enforcement when inspections yield rule violations; explore new models of care; change the culture of long-term care to be more attentive to the value of elders; and stop for-profit companies from opening new nursing homes in Ontario.

Through previous correspondence with media, Scott has indicated she believes the Ontario government is doing a good job of reinvesting into long-term care. She stated that, in the 2021 budget, the government invested more than $2.5 billion to create more than 20,000 new beds provincewide, and upgraded almost 16,000 beds to a “modern, 21st century standard.” Scott said the province has also committed to investing $4.9 billion over four years to increase the average of daily direct care from 2.75 hours to four hours.

“I think if these things were implemented sooner rather than later, that would be a big help,” Ritchie said. “I don’t see a lot of this taking place at this point in time. We need action, not words.”

PSW program coming to secondary school in the fall