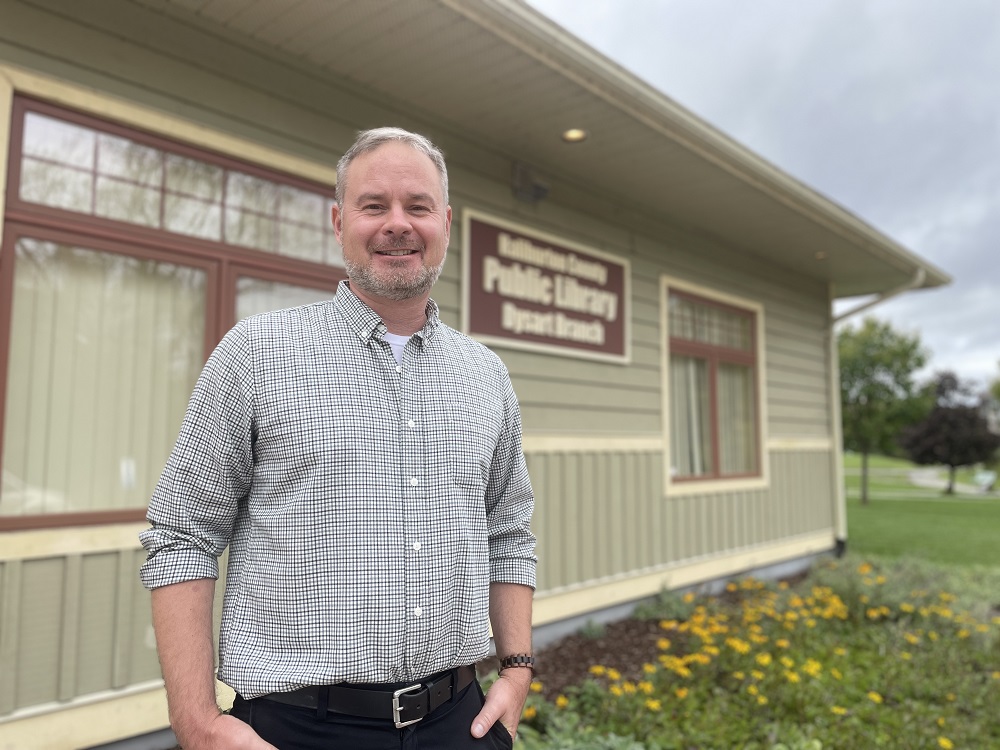 Before Chris Stephenson began studying to become a head librarian, his sister gave him a book, Riding with Rilke. In it, an English professor delves into the worlds of libraries, archives and travel via motorcycle.

Turns out it was a fitting gift.

Stephenson, originally from Gravenhurst, has just been appointed as CEO of the Haliburton Public Library. Not to mention he’s an avid reader, researcher and motorcyclist as well.

“I didn’t know until after I read it that it was so appropriate for me: I became a librarian, I love motorcycling and I love books and archives,” Stephenson said in an interview at his new office.

“I don’t feel overwhelmed because I’ve received such a warm welcome,” he said.

“When the door is open and my job is to walk through and make people feel comfortable and excited about the library… half the work is done.”

He joined the field later in life, after working as a senior set carpenter in Vancouver’s film industry for 10 years.

The life of a set carpenter means long hours and physically taxing work, and Stephenson began charting a career pivot. He invested in a masters of library and information sciences degree from the University of British Columbia. Next, he gathered experience from multiple librarian roles, including a stint in Bancroft. It was a journey to get him to the point where he could jockey for the role of CEO, the most senior position within a library system.

“I was prepared it would take some time, and it has,” he said.

He was also excited to move to the community of Haliburton, where he spent much of his childhood at a family rental property in the Haliburton Forest.

“I knew there is a very strong arts community [in Haliburton] and that’s something I was looking for in a community,” he said.

Libraries, said Stephenson, have had to “actively advocate for themselves to stay relevant” by connecting community members with resources they enjoy, and resources they need; community being the key work.

“I’d always been good with people, caring about community and community building. One thing I noticed in libraries is that you’re well poised to be one of the community builders.”

He’s already made strides in ensuring the libraries he works in consider diversity and inclusion in their programming. In 2020, Stephenson and a colleague at the Okanagan Regional Library in Kelowna hosted a drag queen storytime, despite negative feedback online and concerns from the library’s CEO. The two librarians were awarded the B.C. Library Association’s Champion of Intellectual Freedom Award in an online ceremony for their advocacy for the program.

It’s still early days in Stephenson’s role in Haliburton; he’s moved into the office and has been setting up email, meeting with staff, and will soon discuss the library’s strategic plan with the board. But once he gets his footing, he hopes to focus on partnerships with community groups.

“The strength of the community is here, we just need to tie it to the focal point of the library to make things happen,” he said. He mentions the arts community and the teen population of the Highlands as a special focus. “I hope to make these connections; restore connections that may have fallen by the wayside.”

Maybe it’s just a bit like his former career, another type of construction. “Building sets and building houses is rewarding in a certain way, but the feedback you get from working with the public is powerful,” Stephenson said.