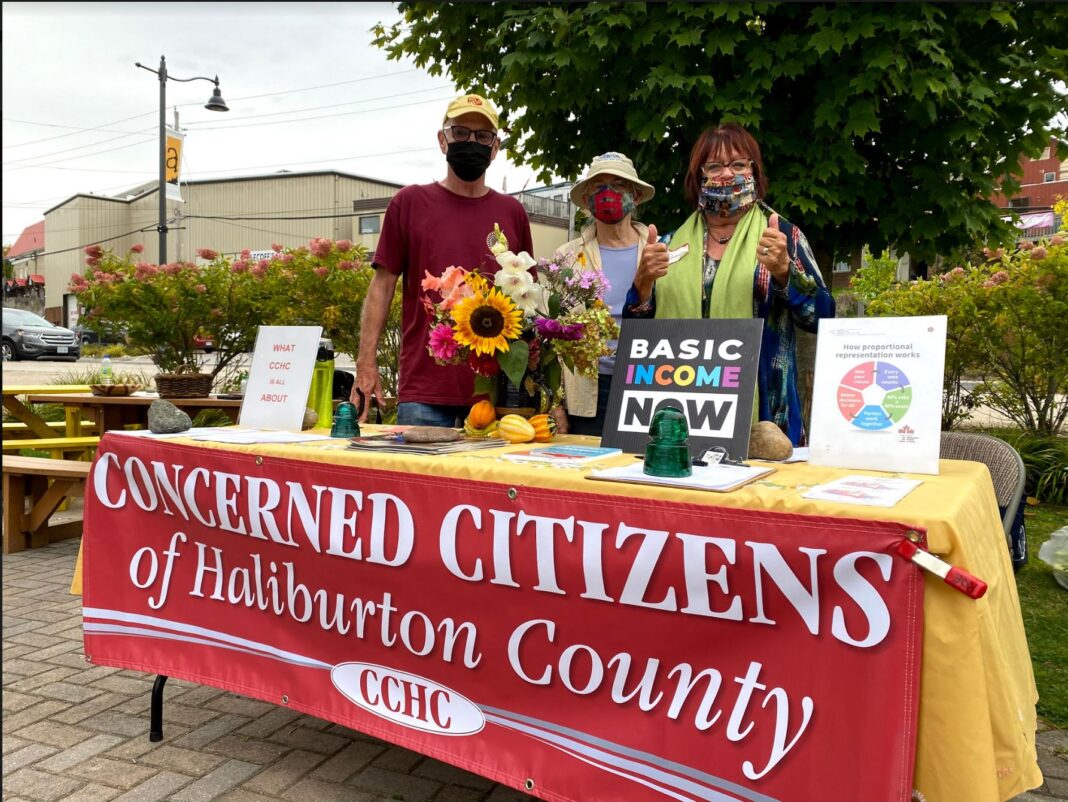 More than 40 area residents provided their thoughts and opinions on the potential implementation of a nationwide basic income program during a special day-long presentation at Head Lake Park on Sept. 21.

Organized by the Concerned Citizens of Haliburton County (CCHC), the event was designed to “get people talking, and get people thinking” according to Bonnie Roe, one of the activist group’s leading volunteers.

Since their formation in January 2019, CCHC has been one of the community’s lead advocates when it comes to social justice issues. The idea of a basic income has been prevalent, in Ontario at least, for several years. Back in March 2016, the Liberal government of the day launched a pilot project designed to test a growing view that a basic income could help to reduce poverty in a sustainable way.

The program was rolled out in Hamilton, Thunder Bay and nearby Lindsay. More than 4,000 people were signed up, with individuals receiving up to $16,989 per year, and couples slated to get $24,027. The program was intended to improve outcomes in food security, stress and anxiety, mental health, health and healthcare usage, housing stability, education and training, and employment and labour market participation.

“We believe having a basic income is vital to helping individuals who may be struggling get their lives back on track. When we saw the positive outcomes that people who were enrolled in this program were having, it was incredible,” Roe said.

The program was later discontinued in 2018 after Conservative Doug Ford assumed office.

“When it was shut down, many people’s hopes and dreams were totally destroyed. These people had started to do things such as no longer rely on the food bank for food, going back to school, or even starting their own business,” Roe said. “Once that level of support was removed, a lot of these people found themselves back at square one.”

Carolynn Coburn, another volunteer with CCHC, set up a chart at last week’s event and made a note of every specific thing an individual stated they would need to live a happy life. She said the group will be using that information to broach the issue of a basic, livable income with provincial and federal politicians in the near future.

“A lot of the responses we received related to housing, having enough food, being surrounded by family and friends. Then there was a community component too – that was important, because people felt they would be more inclined to get involved in their community, and be good, active citizens if they felt more secure financially,” Coburn said.

Given the situation that many people across Canada found themselves in last year when the pandemic first hit, Coburn feels there’s more compassion out there now for individuals who do need an extra helping hand. Approximately 8.9 million people applied for support through the Canada Emergency Response Benefit last year after being financially impacted by the onset of COVID-19.

“It was pretty interesting to see what the government thought people who lost their jobs needed to survive, to get by month-to-month – they each got $2,000 per month,” Coburn noted. “Considering the pilot project for basic income was at $16,900, that’s a big increase.”

The major stumbling block many people have difficulty with when it comes to a universal basic income is the reported costs associated with implementing such a program. According to the Office of the Parliamentary Budget Officer, a guaranteed basic income would cost $87 billion in 2022, rising to $93 billion in 2025.

Coburn says that money would be offset by a decrease in monies paid out through other social programs. Roe said she’d like to see some of the country’s richest residents dip into their pockets to help pay for the program.

“In my view, a basic income would come from our taxation system, the same way that healthcare does. If you turn around … and look at the very, very wealthy, and if you tax them even a minimal amount, you would have all the extra money needed to be able to allocate to something like this,” Roe said. “If people know they have this secure amount of money coming in every month, that could change their life. They will be able to plan and know they have enough for a comfortable life and have all of their basic needs met.”

She concluded, “It would be a win-win for all involved.”