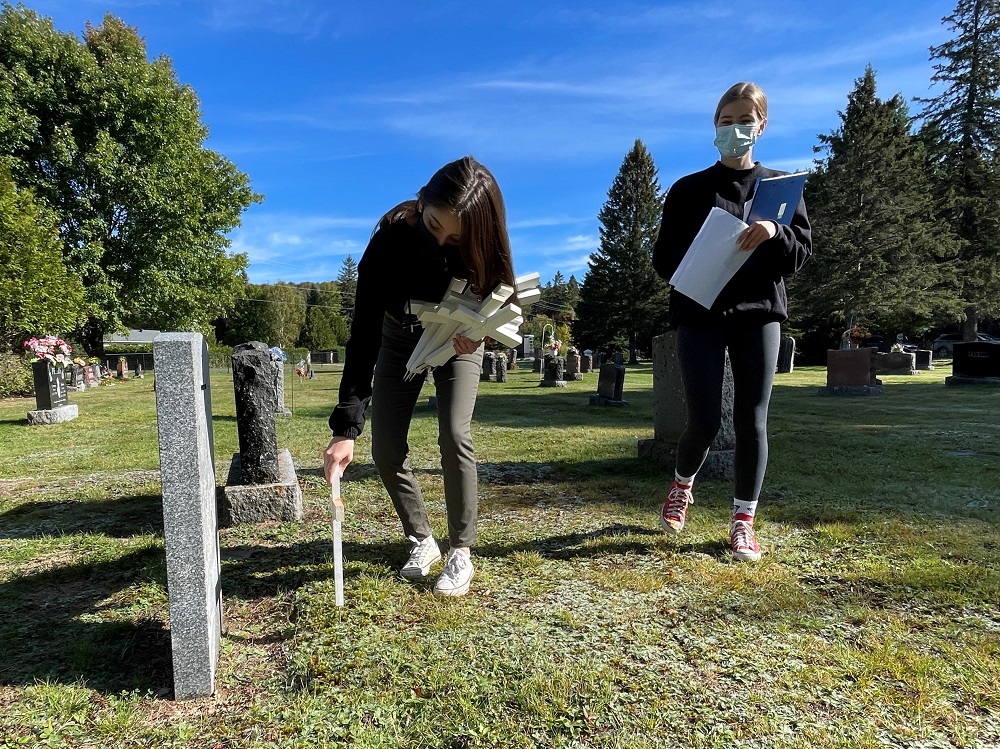 This week at Haliburton’s Evergreen and St. Anthony’s Cemeteries, small white crosses adorned with poppies pay tribute to those who served in the Canadian Armed Forces. On Sept. 20, the crosses were laid as part of the Haliburton Legion’s second annual Veterans Decoration Day.

HHHS students helped find the graves of Canadian forces veterans at both cemeteries, and spent time planting a cross in front of each one.

“They can’t be here to do it, so it’s important we help remember them,” said high school student Gerrit Kooistra, one of 20 students who took part.

“Anything we can do to help the legion, we’re there, said HHHS teacher Paul Longo who organized the students’ involvement.“We try to do as much as we can within the community as well as the school.”

After the Legion Colour Party led the march to the cemetery, Local musician Gord Kidd strummed songs on the guitar. Songs like Leonard Cohen’s Hallejujah echoed across the cemetery while the students paid tribute to the soldiers. The project was organized and aided by the Haliburton Legion’s Ladies Auxiliary and the Haliburton & District Lions Club.

Legion members like Sir Harold Rowden, who served in the battle of Normandy, and President Don Pitman, watched as the students distributed crosses.

“It was quite emotional for me,” Pitman said. “ You just go right back and remember the people who gave their life in service to their country or they spent time overseas so it’s just a great reminder, never to forget.”

Pitman said the presence of high school students is an important part of the day. To him, it means they’re learning valuable lessons about Canada’s past and present.

“It’s an addition to Remembrance Day but it has a more local tone, it’s almost like an additional recognition to everyone here that served.”

Learning to continue on snow days