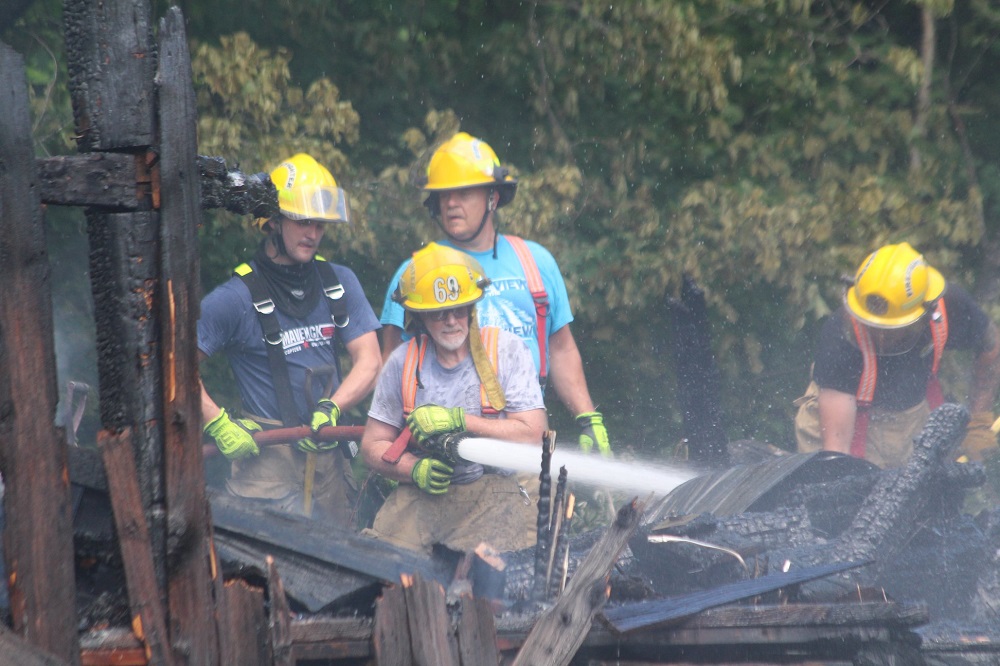 While the Algonquin Highlands fire department is in the midst of an annual recruitment drive for volunteers, Highlands East and Dysart et al fire chiefs say the door is always open to interested candidates.

French said their drive is until Sept. 30. Baughman said HE accepts resumes all year round.

“We do have banners out saying that we are accepting recruits but it’s generally allyear round.” He said they don’t have the luxury of many businesses in the area that keep people local “so we need whatever we can when we can.” He said the challenge is people leave the area for work so are generally not around, even if they do want to volunteer, at critical times such as the daytime hours.

Iles said they typically have a drive every fall although they didn’t last year and they’re just about finished for this year. Iles said he should have a full department of 30 firefighters. He was finalizing the hiring process as of Sept. 16. French said they had a dozen applicants but still need candidates for the north of the riding up in the Oxtongue Lake area because, like Baughman, he said there aren’t the businesses up there. “We don’t get a lot of people applying for the area so it is ongoing there.”

Asked what some of the challenges to recruitment are, French said, “A lot of people. Their lives are so busy. They’re very dedicated to their families. Being a volunteer firefighter does require commitment, your weekly training along with other specialized events, and going to your emergency responses … it’s not like older days where you didn’t have as many sports or activities for your kids. It’s a sign of the times.”

Iles said COVID may be having an impact but he does not think it’s a substantial one. And Baugham said with the increase in the County population due to the pandemic, it may lead to more volunteers.

Volunteer firefighters are paid in Haliburton County, most at just under $20-an-hour but the chiefs don’t think that’s an impediment. Baughman said the pay matches the rest of the province. They added they don’t think volunteers join for the money.

Iles said their call volumes continue to increase. “At one time it was a very minimal number of calls and every year it goes up so it becomes more and more of a commitment every year that goes by so it’s a huge commitment.”

French said one key is local employers being willing to release volunteer firefighters to respond to emergencies.

Iles said he is looking for people who are open-minded and team players. Baughman said “it is very fulfilling when you do get to help someone. I think you just have to have an appreciation for that. For me, a thank you is all I need.”

French added, “And they’re serving their community just like if you were going out to be a hockey coach. It’s the same thing. They’re just trying to help out and be part of their community.”

Baughman said it is good for people to know that the departments supply the training and education so they don’t have to be fully trained coming in to what is a highly trained job. He added employers aren’t expected to pay their employees when they go out to a call since the fire departments pay them. Baughman said they provide training and it’s a good way to get out and meet people and their community.

Iles said there are a lot of female volunteers, too. “It’s not a stereotypical job. It’s a job that’s available to everybody.”

French came from a full-time department.

“it’s so refreshing to see the attitude of the volunteers. They’re here because they want to be. Some people will do it for a short time, and a short time becomes 25-30 years.” He noted they have three volunteers around the 50-year-mark and “that shows how much they enjoy doing what they’re doing.”