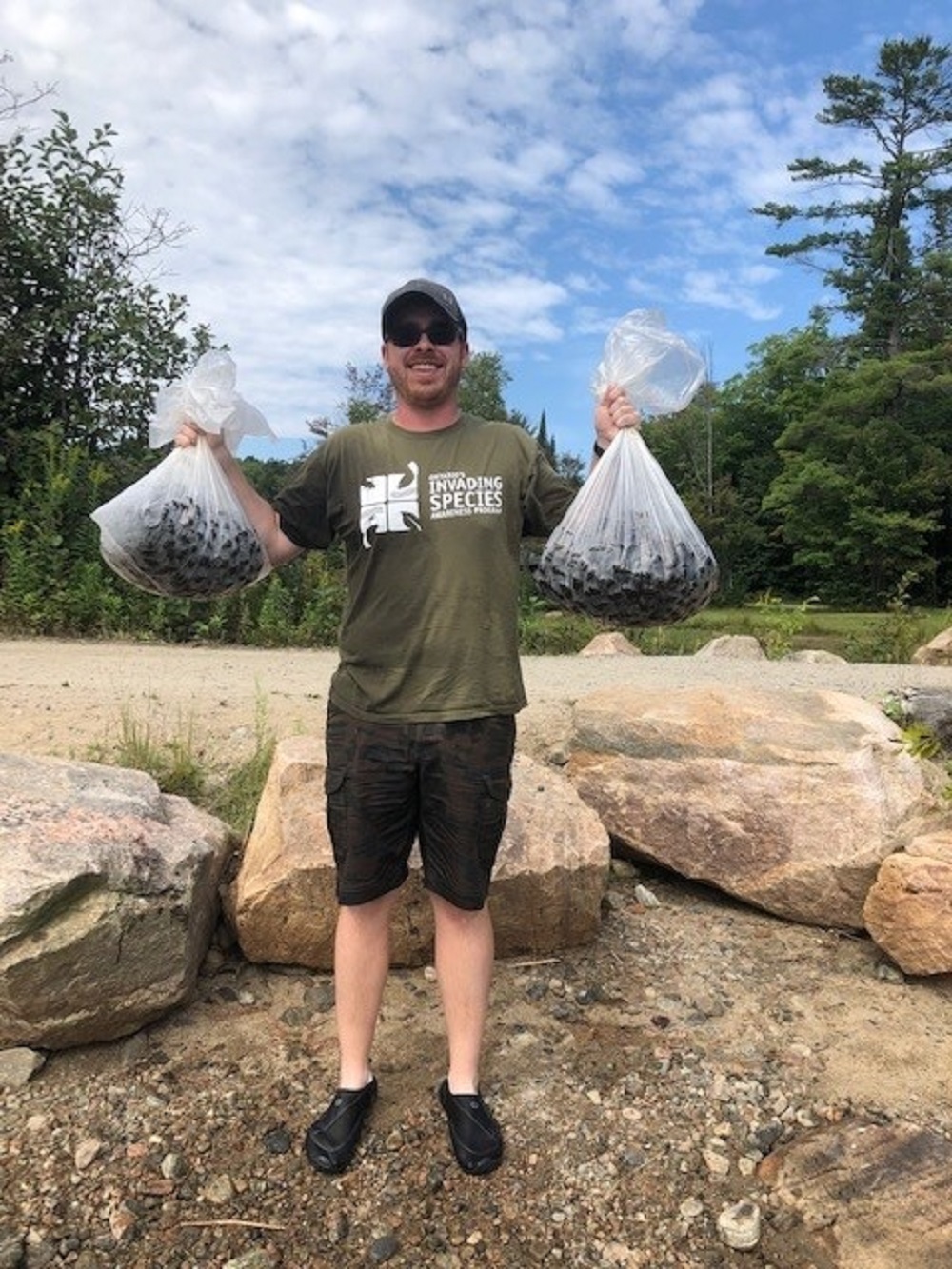 A group of almost 300 local volunteers have teamed up with specialists from the Ontario Federation of Anglers and Hunters (OFA) to remove more than 450,000 invasive snails from dozens of area lakes.

The project, being lauded as the first of its kind in Ontario, kicked off earlier this summer after representatives from the Coalition of Haliburton Property Owners’ Associations (CHA) identified two types of invasive snails that its members say are overly prevalent in a collection of popular lakes.

Paul MacInnes, chair of CHA, contacted Brook Schryer, an invasive species specialist with OFA back in April for advice on how to go about removing the snails.

“I was told pretty quickly that this sort of thing is heavily regulated. Snails, even invasive snails, are protected under the federal fisheries act, so we had to get a license,” MacInnes said.

Schryer took care of most of the heavy leg work in that regard, which included training all of the volunteers who wished to participate in the clean-up.

In an interview, Schryer noted the two species in question – the Chinese Mystery Snail and the Banded Mystery Snail – can disrupt a lake’s eco-system.

“These kind of snails have been linked to largemouth bass eggs being predated upon, which obviously impacts the population of largemouth bass in lakes where these snails are prevalent,” Schryer said. “They’ve also been linked to various parasites that can be passed on to fish, waterfowl, and even humans. There’s science out there that supports links between these snails and Swimmer’s Itch (a skin rash caused by an allergic reaction to certain microscopic parasites).”

History on the Chinese Mystery Snail dates back to the late 1800s, Schryer says. Native to eastern Asia, the snail found its way to North America via boat, first landing on the shores of San Francisco around 1892. Since then, they have quickly spread across the continent. The Banded Mystery Snail is different in that it’s actually native to North America, originating in southern U.S states such as Florida and Georgia. Schryer says there’s evidence to suggest the Banded Mystery Snail was first introduced to the Great Lakes around 1931.

Mark Roszell owns a lakeside property on Mountain Lake. He says he first encountered these types of invasive snails around 15 years ago. He was one of three volunteers on his lake to be trained to collect the snails. Together, he estimates they collected around 6,000 over the course of the summer.

“This program is desperately needed. These snails have been getting worse and worse now for several years,” Roszell said.

“They’re not good for the lake, and, at certain times, they seem to have these dieoff events, where hundreds and hundreds of empty shells float right to the surface, and all this organic matter gets into the water. It creates a horrible smell.”

Michael Jankowski and his mother, Beatrice collectively gathered up around 17,000 snails on the weekends they spent at their cottage on South Lake. He hopes the attention generated through the success of this year’s program will inspire more people to get involved in the future should it return.

“I think this sort of thing is really important for the longevity of the lake … I fear that, unless we do something about this, in the future our lake could turn be taken over by these mystery snails, and the impacts on the water quality could be terrible,” Jankowski said.

Schryer noted these two types of snails are particularly dangerous due to the rate in which they reproduce. A single Chinese Mystery Snail, Schryer says, could reproduce up to 100 times.

Reflecting on the success of this first program, Schryer says he was impressed by the many volunteers who went above and beyond to help clean up approximately 45 lakes across the Highlands. He reserved special praise for one individual in particular, who preferred to remain anonymous, who collected around 257,000 snails by herself on Grass Lake.

He hopes to bring the program back in future years, though warned anyone looking to participate would need to be retrained before being allowed to go out and collect.

“When it comes to the goals of this program, I would really like to optimistically say it’s about reducing the populations of these invasive snails in these lakes … We want to give shoreline owners the ability to do something about this problem,” Schryer said. “Maybe over time, with enough dedication, we can start to see some results. These snails are not supposed to be in our waters, and they can have real negative impacts.”