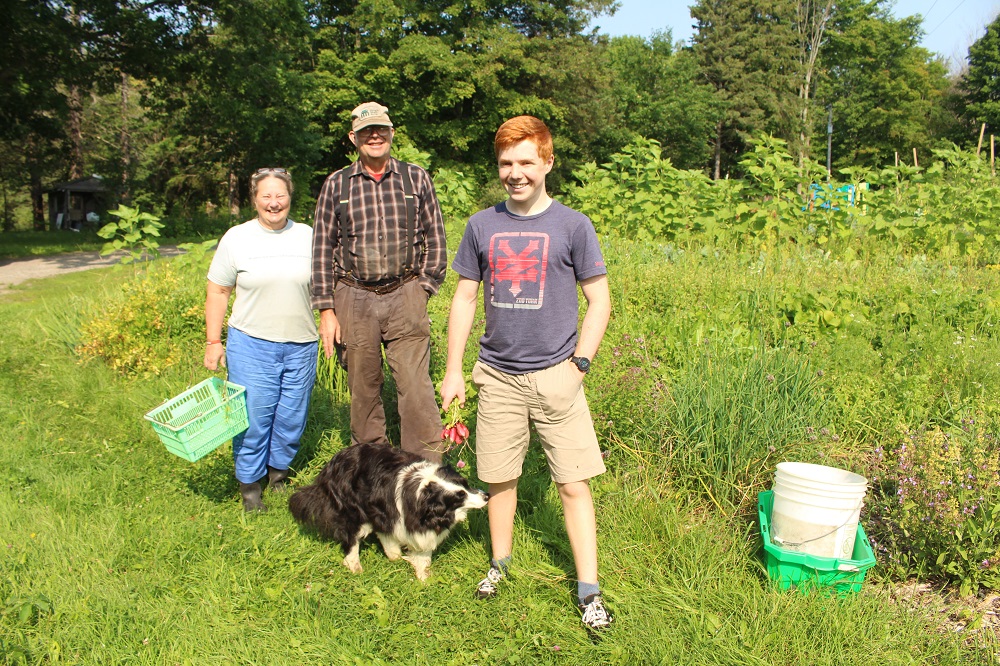 Most days this summer, 16-year-old Evan Armstrong cycles by the leafy forests and lush meadows of Old Donald Road on his way to Waverley Brook Farm.

Since June 22, the teen has run his own business collecting produce for food boxes picked up by 10 local families each week.

Under the mentorship of Jean and Godfrey Tyler, farmers who’ve worked the land for decades, Armstrong’s business is more than a way to make money: it’s taught him business skills, nurtured a love of organic farming and raised important questions about agricultural mentorship in the Highlands.

After running a food box program for years, Jean and Godfrey wanted to shift focus to their cattle, maple syrup and forestry operations. But their large garden plot and irrigation system was still ripe for produce.

So, this spring, they approached Armstrong to see if he might want to restart the program.

“We set up goals, we set up a business plan for him, we were going to mentor him throughout the summer,” Jean said.

That suited the teen just fine.

“I just really wanted to work outside, the outdoors really appealed to me,” Armstrong said. “I’ve always enjoyed gardening, I’ve never tried it on a large scale but here I’m learning some business skills because I’m running a business.”

That’s not to say there haven’t been challenges: learning to control weeds and engaging in succession planting all make up the steep learning curve that is gardening.

“The hands-off for me has been the hardest thing,” Jean said with a chuckle. “How do we let him do what he needs to learn and do? What’s the balance of it: wanting him to succeed, but in order for him to do that he has lessons he has to learn.”

The hardest part for Armstrong? “Weeding,” he says with a rueful smile. While Armstrong says he probably won’t pursue farming, he’s learned a lot, and plans to continue his own garden even after this season at the Tyler’s farm wraps up.

A way of life

“So we have Kale, Swiss Chard, Lettuce,” Armstrong says, gesturing to each crop of lush vegetables. “As you move farther down we have basil, cilantro over there; some parsley.”

Beside a white enclosure full of ripening tomatoes, Jean pulls up deep red radishes and gently places them in a plastic crate for Tuesday afternoon pick-up.

The Tyler’s desire to share their land, and mentor young people, is rooted in strongly held values of agricultural stewardship.

Each box Armstrong fills is a step towards what they want to see: young people nurturing the land, as has been done on their Dysart et al farm for more than 100 years.

“It’s not a way to make millions, it’s a way to care for the land,” Jean told The Highlander under the shade of a wooden shelter where visitors pick up produce boxes.

Beside her, Godfrey explains a “crisis” which is part of the reason why they wanted Armstrong to start up the business: “the next generation: how do they learn to be growers, producers?”

A 2016 Vanier Institute study reported that over half of Canadian farmers were over 55. Nine per cent were under 35.

Godfrey says having Armstrong join the farm this summer is a way for a young person to test out farming. Otherwise, tractors, land costs, tools and more pose too high a price point for people to try out the lifestyle. The couple has also hosted organic farm volunteers through WWOOF (World Wide Opportunities on Organic Farms).

For him and Jean, their land’s value lies in its rich history as a place where things grow; a place for farming animals; a resource for forestry; a vital part of Haliburton’s landscape.

“As much as it’s Evan’s story, it’s also the opportunity for mentoring, to find young people who are interested in agriculture: how do you do it, how do you make it work?”