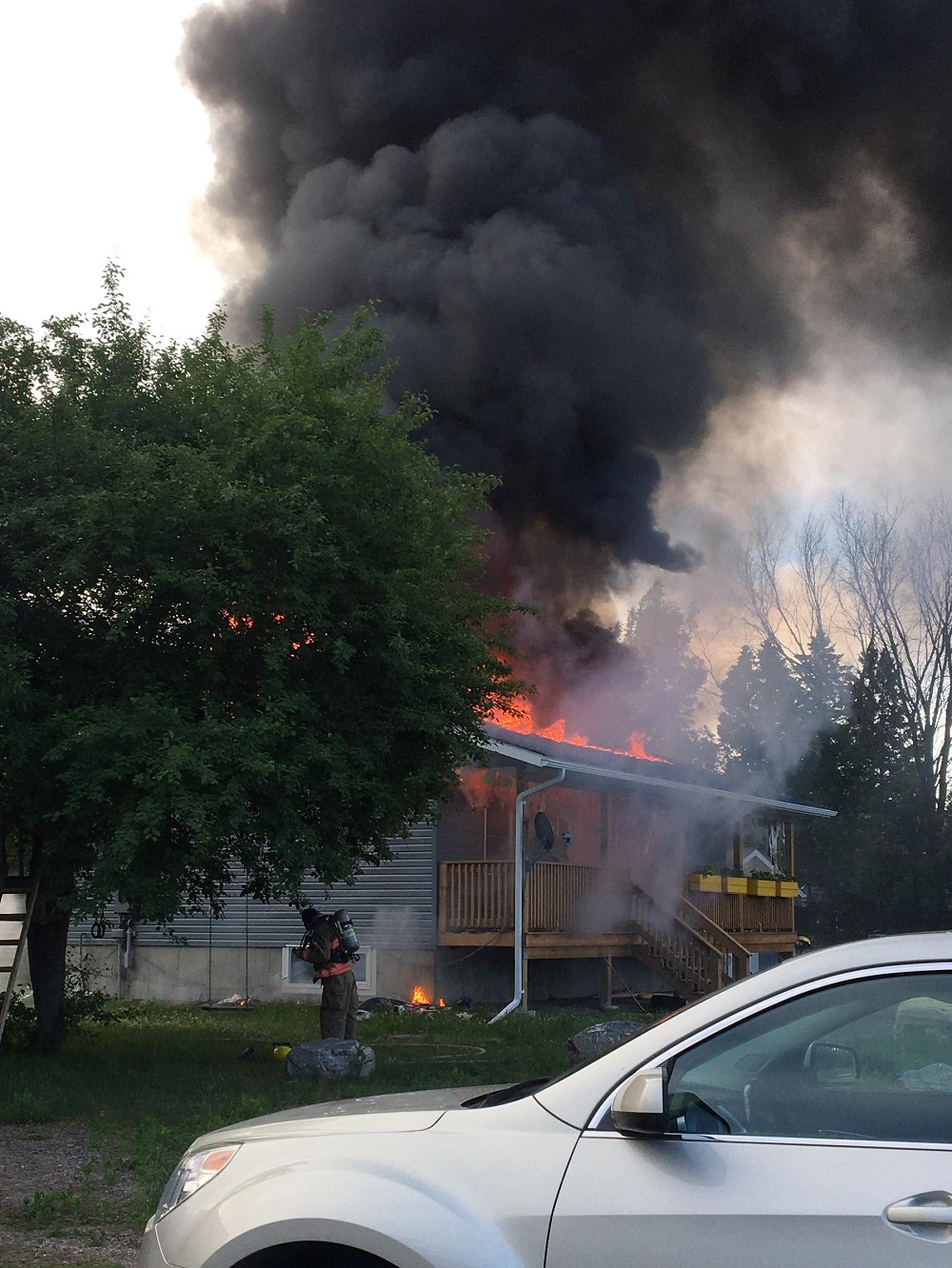 After an early morning fire destroyed their home June 22, a West Guilford family is grateful for an outpouring of community support.

Lezly-Ann Crosmaz-Brown and her son and nephew escaped their rental home as the roof was engulfed in flames. The fire caused an estimated $300,000 in damage.

As soon as the family was out of the house, neighbours and passerbys took action. Ryan Mitchell of Haliburton removed propane tanks and other accessible items from the porch and a neighbour, electrician Steve Churko, disconnected the house’s electricity.

“Everybody’s been so accommodating — I’m just so thankful,” Crosmaz-Brown said.

“I just got off the phone [with emergency services] and these two just swoop in; that was very comforting.”

After they heard the fire alarm, the family rushed out of the home. She heard her nephew, Walker Davis Brown, calling for her son Angus Gryphon Wowk. The eightyear-old took his cousin’s hand and quickly led the five-year-old out of the house. The family has been celebrating the child’s act of heroism.

“We’re all making sure to tell him how proud we are, because not everyone knows how to act in an emergency,” CrosmazBrown said.

After that, neighbours looked after the kids. Crosmaz-Brown stayed in the driveway as firefighters arrived to fight the blaze and her partner, Nick Wowk, rushed back from work. Her sister, Natalie Crosmaz-Brown, was not at home.

While the house can’t be salvaged, Crosmaz-Brown said the community of West Guilford and Haliburton County has been helping the family rebuild.

They are staying at Camp Medeba and a GoFundMe Campaign, started by Crosmaz-Brown’s mother, has raised nearly $7,000. A local church, the Haliburton Lions Club, Nesbitt Firewood and many other individuals have pitched in funds.

“This is going to help us clean the lot,” Crosmaz-Brown said. The family had renters’ insurance, but the family is responsible for removing their possessions.

Brandon Stamp, a friend and neighbour, held a fundraiser for the family through her business, Right Brained Mom. She raised more than $700 for the family. Her partner looked after the family’s kids while fire crews finished putting out the blaze.

“We were really happy to help them — it’s already such a hard time,” Stamp said, mentioning how resilient the family has been in the days following the fire.

For Stamp, helping out was the natural response: “We helped them because they’re our neighbours and our friends,” she said.

Jen Coates, of West Guilford Shopping Centre, set up a donation box after hearing about the fire.

“West Guilford is an awesome community – every time we have a tragedy like that we try and support it as much as we can,” Coates said. So far, they’ve raised around $300.

For the past weeks, Crosmaz-Brown said she’s been researching the seven stages of grief as she and her family try to adjust to a new reality.

Not everything was lost: CrosmazBrown smiles as she recounts how firefighters saved special heirlooms: her son’s favourite stuffed animal, an old mural and jewelry boxes passed down from Crosmaz-Brown’s grandfather.

“We are always trying to see the silver linings of things,” CrosmazBrown said.

As summer arrives, she said the children have recovered from the shock well, and the family plans to take advantage of outdoor activities while they search for new housing options. They want to stay in West Guilford.

“West Guilford is a small town where everybody knows everybody,” Crosmaz-Brown said. “They’re not afraid to help each other.”

Donations to the family can be made through Gayle Ann Crosmaz’s fundraiser on Facebook: “Help Gayle’s personal emergency fundraiser.”

Highlands East calls for US border to stay closed