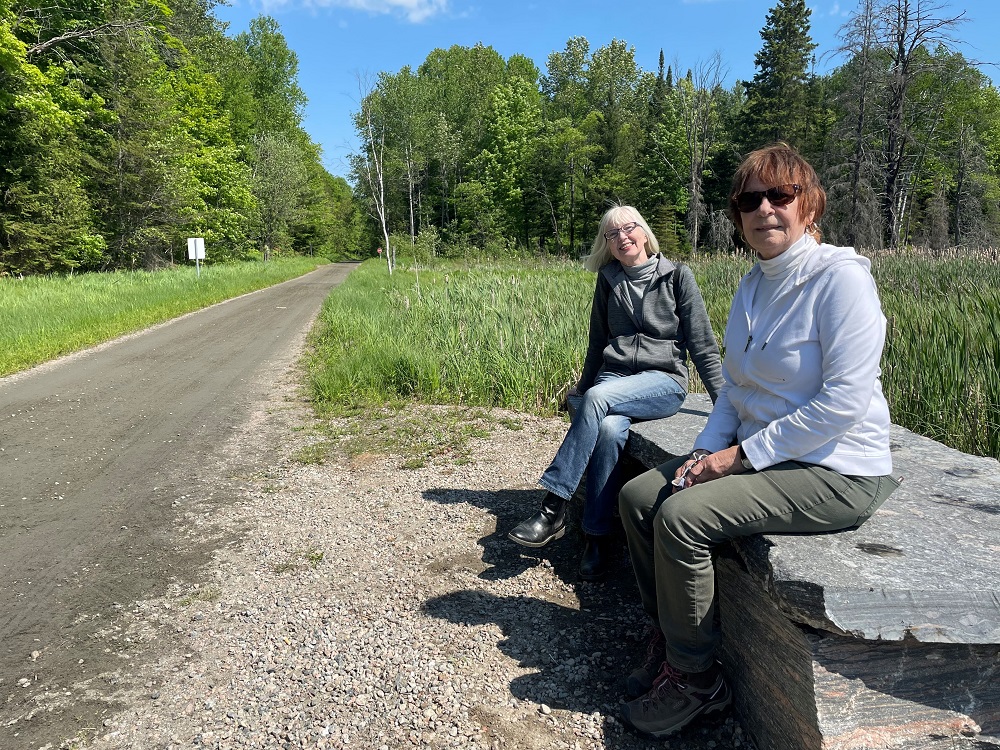 Leona Carter doesn’t remember the crash: her friend, cycling with her along the Haliburton County Rail Trail in 2019, does. “She said we were just riding along and suddenly she saw me just go flying over the handlebars,” Carter said, standing on the rail trail near where the accident took place. After hitting a large rock protruding the trail’s packed down gravel, Carter hit the ground head-first and lost consciousness. She only remembers waking up in the back of an ambulance.

In late May, the County announced it would use provincial and federal funds to improve safety on the trail, which is used solely by snowmobiles in the winter and a mix of ATVs, pedestrians, cyclists and equestrians in the other seasons.

However, the Friends of the Rail Trail (FoRT) advocacy group say the renovations don’t fully address the safety of cyclists and pedestrians.

“Trail surface has always been a matter of concern. We’d like to think this funding announcement is good news, but there are caveats,” wrote FoRT chairperson Pamela Marsales in an emailed statement.

“A surface treatment over an unstable base is like glossing over old, peeling paint.”

Funds from $196,616 which the County received as part of the Investing in Canada Plan will go towards gravel overlay on 30 kilometres of trail, new benches, 500 metres of barriers and numerous signs outlining the trail’s history and ecological habitats.

But cyclists such as Marsales and Carter say that more needs to be done.

They say loose gravel is a difficult surface to cycle on, and large puddles, washedaway sections of trail and uncovered rocks are causing people to turn away from the trail system.

In an interview on the trail, Marsales said she’s heard from “many, many people who said ‘oh I tried riding my bike on it once and the surface was so bad I’d never go back there again’.”

According to Marsales, FoRT was not contacted by Haliburton County before the County announced the planned renovations – nor were they consulted about what might improve a cycling experience.

“What I’d like to see is open communication about health and safety on this corridor,” Marsales said.

Robert Sutton, director of public works for the County of Haliburton, wrote in an emailed statement that the County “have and continue to have numerous conversations, presentations, etc. from various user groups and concerned stakeholders regarding the rail trail.”

The County is set to host a Haliburton County Rail Trail roundtable discussion this summer at an undecided date.

According to Sutton, the granular overlay and compaction is a proven method for increasing the safety of the trail and rideability for cyclists.

“The existing granular base followed by the placement and compaction of granite screenings,” Sutton wrote. “This treatment method has proven to be very effective for all users of this multi-use trail, including cyclists and pedestrians.”

“The problem has been right from the beginning – I’d say since about 2005,” Marsales said. “The surface hasn’t been safe or adequate for all levels of cycling ability.

Sutton wrote he had a staff member follow up with Marsales and FoRT to hear specific concerns about the planned work on the trail.

In an email, Joel Bocknek of the Haliburton ATV Association said that the gravel overlay and other renovations wouldn’t have “much of an impact” on their riding community.

Omicron gives present we want to send back