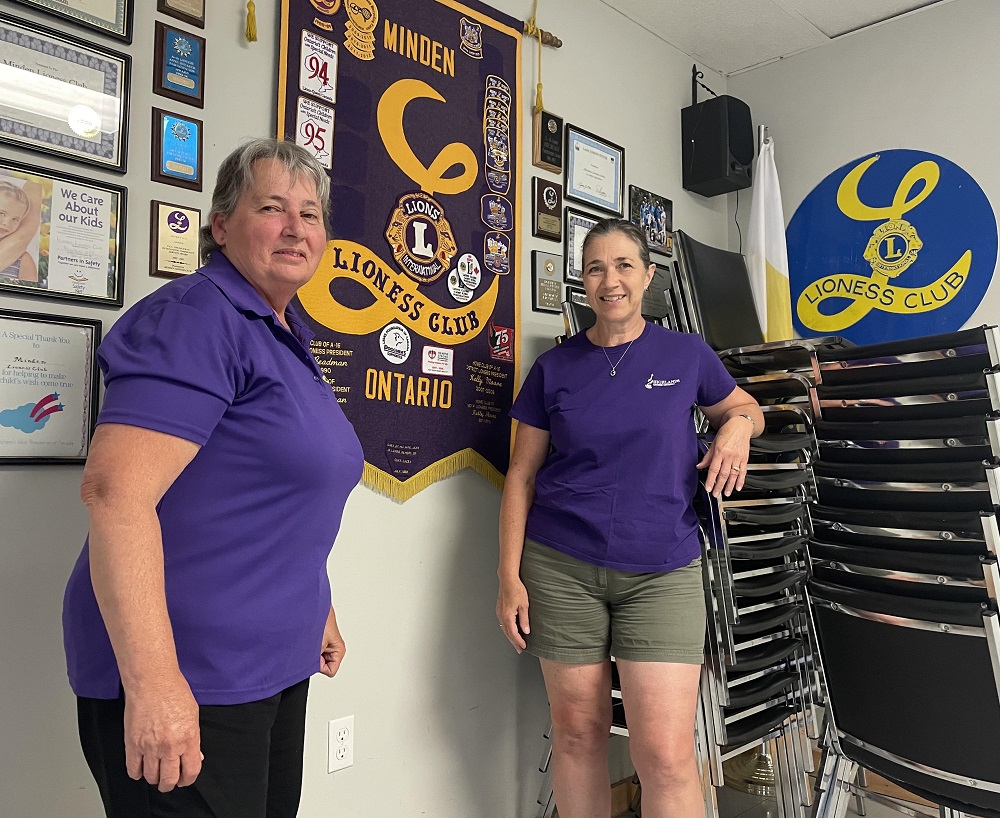 After more than 35 years of community service, the Minden Lioness club is no more.

Lions International, the governing body of all Lions and Lioness clubs, announced they were cancelling Lioness club insurance effective July 1.

“We had no say,” said Lioness Janet Readman, current vice-president of the club. “Our members are sad.”

Minden Hills Mayor Brent Devolin said he hopes the club members can continue to work in the community – even after the Lioness club disbands.

“[Community groups] add all kinds of services and dimensions to our communities, to lose any of them is a tragic loss,” Devolin said.

Lions International has been gradually encouraging Lioness clubs to integrate into the main Lions club structure since 2018.

But for Readman, a Lioness in Minden since 1988, being a Lioness was a unique experience.

“We liked where we were,” Readman said, mentioning how the Lioness meeting schedule was easier to fit in her weekly schedule. “It worked out perfectly for us.”

Lioness Kelly Moore agreed. She said being a Lioness also meant being part of a tight-knit community.

“We didn’t take ourselves too seriously,” Moore said. “We were always joking around, it was just fun.”

While Lioness clubs began as a way for women, initially barred from becoming Lions, to serve their communities, it flourished into an international collection of clubs focused on small-scale fundraising projects and community initiatives.

Moore and Readman agree their most popular fundraiser was the annual Canada Day rubber ducky race.

“It was kind of the finale for Canada Day,” Moore said. Since 1990, the race drew large crowds who cheered on scores of yellow plastic ducks which floated down the Gull River.

All the money raised went back into Haliburton County services.

Fall through the cracks’ fundraising

On a table in the Minden Lions Hall, Readman and Moore spread out photos and plaques from Lioness history. Smiling Lioness members are shown cooking meals together, posing with Santa and collecting money in nightgowns during the infamous Bedpan Blitz fundraiser.

Readman said the Lioness club worked hard as a team. One time, they spent all day rolling, cutting and baking pies in the local arena. “We were baking pies until we dropped,” Readman said with a smile.

While the club didn’t have the membership to host large fundraisers or lotteries, Readman said they focused on community causes that might otherwise “fall through the cracks.”

One year, the Lioness club donated money to a man who needed $75 for a heated blanket to stay warm in an unheated house.

Another Christmas, Readman remembers that they searched the community for a family who could use “a little extra help” buying gifts.

Both Lioness club members say raising money for a guide dog was one of their club’s biggest achievements.

“That was our big focus,” Readman said. “For years we put money aside.”

After the club folds, they’ll be on the hunt for a Haliburton County resident who needs a seeing eye dog: the funds are reserved for the purchase of their canine companion.

The club has been spending the past weeks and months clearing out their bank account. They’ve sent money to the local cadet branch, Haliburton Highlands Health Services, camps around the region and multiple families in need.

No matter what, said Readman, the Lioness legacy will live on.

“We made a pact, we’ll still meet together,” Readman said.

The club’s official history sums it up: “we are proud to be members of the Minden Lioness Club. We are only eight members, but we are mighty.”