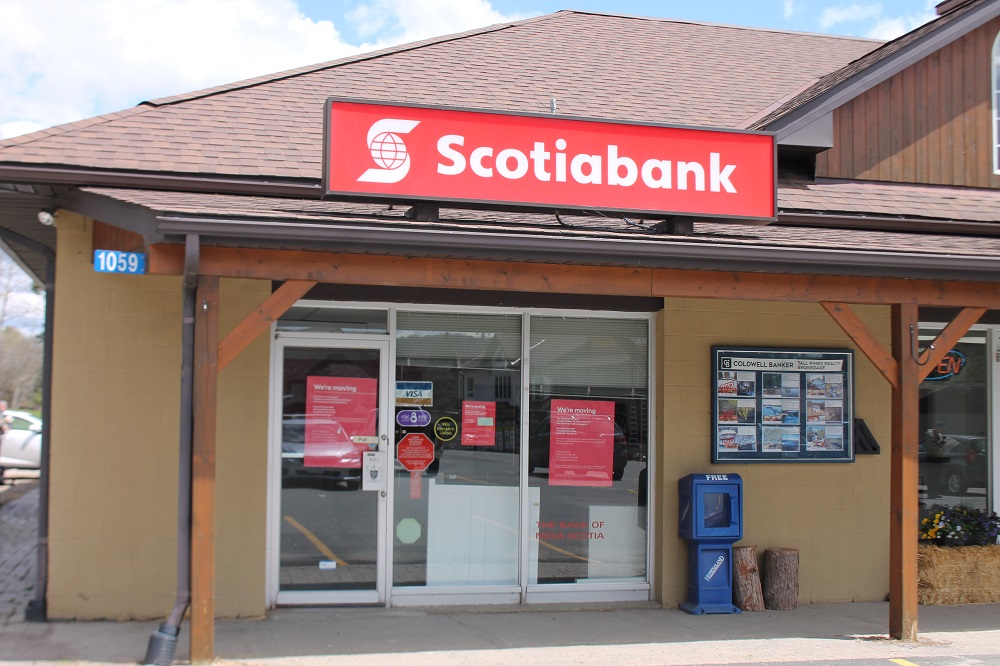 Scotiabank has officially confirmed the closure of its branch in Dorset, with an Oct. 19 move to Huntsville.

The branch had been closed for more than a year, and before that only open Mondays between 10 a.m. and 2 p.m.

Manager, Canadian Banking Communications, Daniela Da Silva told The Highlander, that “after careful consideration, we have made the decision to relocate our services at our branch at 1059 Main St in Dorset, which has already been closed for more than a year, to our branch at Hunstville Place Mall, 70 King William St, Huntsville.”

She confirmed the move will take place October 19.

“We feel that this relocation will help us provide better service and greater resources to our customers from our Huntsville Place Mall branch and our team there is committed to assisting our customers with any questions they may have about this change,” Da Silva said.

She said the decision was made “as a result of a fulsome business review which includes a full area market analysis and is not limited to one branch, or to rural or urban areas. We also review factors such as proximity of the branch to other Scotiabank branches and customer traffic at branches across the market area.”

Customers received notification letters dated April 15 for the branch that is located in Algonquin Highlands.

Mayor Carol Moffatt said she was in touch with a Scotiabank representative, who called to tell her about the closure.

Moffatt said she was told the accounts of bank customers have always been integrated with the Huntsville branch location so the bank will not be changing customers’ bank account numbers. She added there will be no job losses.

However, she said not all of their residents shop and bank in Huntsville

“It is tremendously unfortunate, because the bank is one of the things that gives the village its identity,” Moffatt said. “If there’s any solace to be had, it’s that no jobs are being lost and the banking integration has existed for years anyway. People aren’t suddenly without a bank.”

In January, 2017, Scotiabank officially closed its doors for good in Wilberforce, leaving that town without a financial institution and requiring customers to use its Bancroft branch.