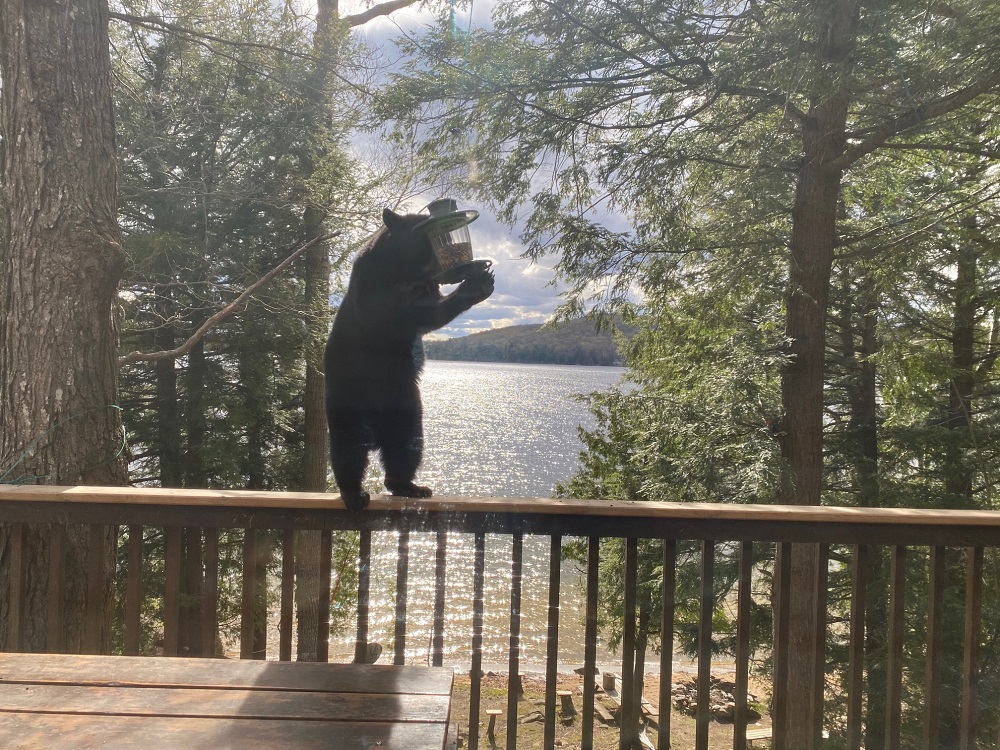 Brian and Wendy Campbell returned home from getting groceries about 4 p.m. May 6 only to find a surprise visitor on their deck.

Brian Campbell said he suspected something was up as their Golden Retriever, Casey, was “quite agitated.”

“We soon found out why,” he said. “A young bear, probably just two years old and left on his own by his mother, was on our deck. He was reaching up and getting at our bird feeders, which have since been raised.”

The Campbells live on Moose Lake in Dysart et al. Brian Campbell said they have lived in the area for years. He said they’ve always had bird feeders and typically keep them high enough so the racoons can’t get to them.

“In 40 years, this is our first experience with a young bear in the bird feeders. As MNRF (the Ministry of Natural Resources and Forestry) will tell you, two-year-old bears are abandoned by their mothers when they come out of hibernation in the spring of their second year. They are starving and very immature.”

He said they are aware of the recommendation to take down bird feeders in spring “but in 40 years, this is the first time that this has happened. In this encounter, the bear destroyed two bird feeders but came back because he had not been able to finish off the third feeder. It had been raised to five feet or so, but he was still able to reach it.”

The MNRF and Ontario Provincial Police are reminding Haliburton County residents to be bear wise and prevent bear encounters again this spring.

In a news release, the two organizations asked Highlanders to exercise caution as black bears have begun to come out of hibernation.

“Bears waking up from hibernation are faced with a scarcity of natural food sources, leading them to look for food in garbage cans and bird feeders,” they said.

They added you can prevent bears from visiting your home, cottage or neighbourhood by:

• Storing garbage in waste containers with tight-fitting lids (and indoors if possible).

• Putting away bird feeders for the spring (you can offer birds natural alternatives, such as flowers, nesting boxes and fresh water). • Cleaning food residue and grease from outdoor barbecue grills after each use.

They said bears that enter our community are not necessarily a threat but it is important to know who to call if you encounter a bear. For non-emergencies, the province operates a toll-free bear wise reporting line (1-866-514-2327). The line is open 24/7 from April 1 to November 30.

If a bear is posing an immediate threat by exhibiting threatening or aggressive behaviour, remain calm and call 911 or your police department.

More families will be able to get midwives

The class of 2020 celebrates despite COVID