“When I was young, I always wanted to write. Living in a small community, we never had writers do book talks or come to our schools,” she said. “I think it’s really important for, especially school aged children, to see that writers don’t just live in the city, but they’re normal people doing a normal profession.”

Kearsley is the writer in residence chosen by the Haliburton Highlands Literary Arts Roundtable for this year. The program brings a Canadian writer to Haliburton for a week to help them focus on their writing.

In exchange for the time to write in the Highlands, the author is asked to speak to the community about the profession and their own work.

“This gives an opportunity for people to start to see the Haliburton Highlands as a community of the arts with respect to writers as well as visual and performing arts,” said Marie Gage, a member of the Haliburton Reads and Writes Committee. “It brings people into the community for a writerly or readerly event.”

The Haliburton Reads and Writes Big Book Club will be on Sept. 15 and give people the chance to speak with Kearsley about her novel Bellewether, directly.

Kearsley applied to the program and was selected for her work in the historical fiction genre.

“I write dual time stories that generally involve modern characters dealing with mysteries of the past,” she said.

Most of her novels are two stories, one past, one present, in one. According to Kearsley, the inspiration for the novel came from her own families’ history with war. She had a lot of questions and decided to write a book about what it might have been like for not only them, but the people they were fighting as well.

She said being a curator for Scugog Shores Museum also helps spark inspiration for her stories. Reading historic letters and journals gives her ideas for characters and plot lines that are based on real events.

Gage said the residency encourages authors to work on their writing surrounded by nature and Kearsley plans on doing just that with her newest novel called The Vanished Days, a prequel to The Winter Sea.

The Big Book Club is being held at the Haliburton Legion from 2 p.m. to 4 p.m. and is admission by donation. People interested in attending don’t have to read the novel but can buy it at 20 per cent off at Master’s Book Store if interested.

There will be light refreshments, a book signing and a silent auction taking place throughout the evening. 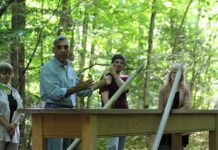