Nestled at a cottage on top of a steep hill lays a mass of metal fashioned into a track plunging towards a lake.

Peering down from atop a lift makes it resemble a rollercoaster. But riding down to the waterfront at Drag Lake is slow, steady and minimizes the sense of a plunge. The 346-foot structure is Dysart et al’s first built by Inclined Elevation, which gives hillside cottages a way to directly access the water. The $200,000 device was completed last month at 2016 Blueberry Line, which is for sale and had an open house July 10-11.

“These people had to go load a fourwheel-drive vehicle, drive out and down this really dangerous road to get to the water,” Weinstein said. “Now, it’s a fourminute ride and it’s totally safe.”

Weinstein has built more than 80 lifts since 2003, scattered across cottage country including Muskoka, Kawartha Lakes, Huntsville and Quebec. The theoretical particle physicist said there are difficulties to overcome when designing a lift such as this.

“How do you pick this route? How do you find where to go?” Weinstein said. “There’s lots and lots of challenges.”

But the man said he relishes that.

“It’s so much fun. I have to think. I have to solve problems. Not the kind of problems I did as a physicist, but similar.”

The lift is a value-added proposition for the property, listed at $3,999,000. Realtor Chilla Riddle said the elevator is a fun ride.

“It’s nice and smooth and you see everything. It complements the surroundings.”

The lift required a variance from Dysart et al to build. Weinstein said the structures are largely unregulated, but designed and engineered with safety in mind.

“We’re only unregulated if we don’t have an accident,” Weinstein said. “We check every nook and cranny … because we love being unregulated. We don’t have to follow rules that other people, bureaucrats have set out.”

To date, no accidents involving the lifts have occurred, he added.

Although it is a first for Dysart, this is not the first in Haliburton County. Jim Carnegie had one built at his cottage in Minden in 2010. Carnegie said his wife has a disability. He added the lift has allowed them to go from two or three waterfront trips per year to more than 20.

“If it wasn’t for that, we probably wouldn’t have a cottage,” Carnegie said. “Had zero problems with it and it was exactly what he promised it would be.”

“It transforms people’s lives,” Weinstein said. “It’s a really neat thing to be able to do.” 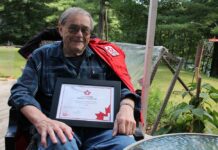