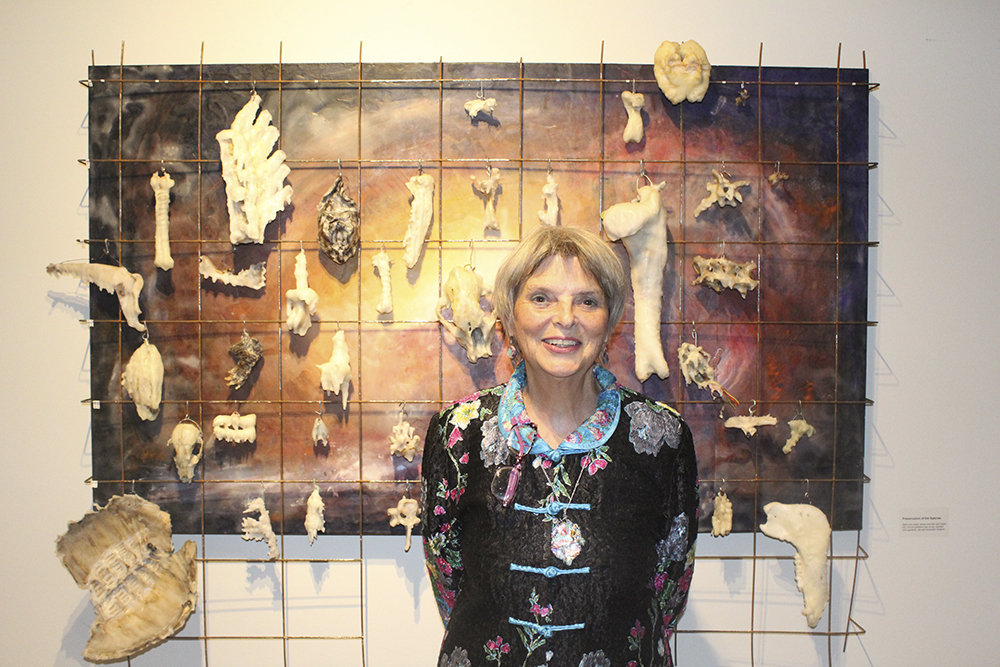 Local, well-known artist Laurie O’Reilly takes a new and creative approach to the environmental discussion with her latest exhibition, Earthscapes.

She uses wax, found objects, sound, bones and more to create an exhibit that takes viewers on a journey into the earth and explores how pollution is changing it.

O’Reilly started her distinctive work after many years of travelling. She said she noticed garbage was becoming a huge problem and felt deeply saddened by it.

“It has to be important to everyone,” she said. “I used to dive and I noticed that boats were dumping their garbage into the ocean and I thought ‘no, you can’t do that’.”

The exhibition is split into four sections: earth gifts, transition, contact and outcomes. The different phases ultimately lead to the end of earth.

“If we don’t do something, it’s not going to be pleasant in the end,” she said.

She added that she wants people to see how special the planet is and how it needs to be respected.

Laurie Jones, curator for Rails End Gallery, said the new installment also depicts one of the gallery’s main focuses which is being more aware of their impact on the earth.

“No longer are we looking at it like an art show is one thing but what kind of light bulbs we use is another. No. We’re looking at it all from an environmentally-friendly perspective,” she said.

It seems the earth was a large focus for many people at the exhibitions opening night. Local art lover Christine Mino said the art puts pollution into perspective and makes people more aware.

“It’s a striking exhibition in terms of what it says about our planet,” she said.

The evening was filled with lots of discussions about not only the art, but the environment as well. Earthscapes is on display at Rails End Gallery until August 25.