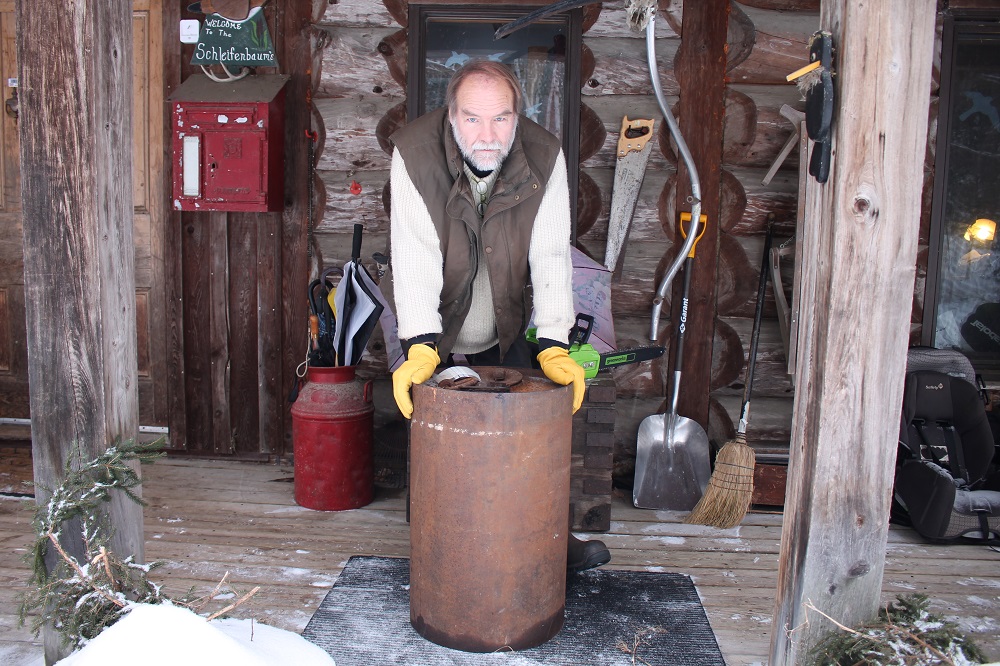 For years, Peter Schleifenbaum’s innovations and outside-the-box thinking helped keep Haliburton Forest and Wild Life Reserve at the forefront of an ever-changing industry.

Described as a ‘maverick’ by those who worked closest with him, Schleifenbaum transformed the 100,000-acre property from a sleepy collection of trees and brush into one of the largest tourism operations in the County. His story, highlighting his impact and contributions to the business over several decades, was captured in a 2016 documentary Against the Grain – A Story of a Maverick and his Forest. The piece was aired publicly for the first time in a Yours Outdoors speaker series event at the Haliburton Highlands Outdoors Association Fish Hatchery Jan. 11.

“Haliburton Forest is a one-of-a-kind (operation), and that’s all down to Peter,” said Tim Gray, executive director of Canadian advocacy group Environmental Defence, early in the film. There were dozens of other similar testimonials sprinkled throughout.

Arriving in the Highlands in 1988 from Freiburg, Germany, Schleifenbaum immediately set out reshaping Haliburton Forest. One of his first moves was to open the property to visitors, introducing new features to make it a more attractive tourist destination.

He was the man behind such ventures as the wolf centre, tree canopy tour and astronomy program. He also commissioned the design and reconstruction of the world’s first commercial, freshwater submarine.

There was a slightly rebellious nature to many of Schleifenbaum’s endeavours; the wolves arrived from the United States in 1993, but only after Peter had stepped in to prevent them from being destroyed. He pressed forward with the canopy tour even after being told it was a bad idea and wouldn’t stick, while stories of the submarine still reverberate around the halls at Queen’s Park today.

The machine completed close to 1,000 dives at MacDonald Lake on the forest property between 2004 and 2006 before being shut down by Ontario’s Ministry of Labour.

During the movie, Schleifenbaum recalls the day that several Royal Canadian Navy officials stopped by to check out the submarine and determine if it was safe.

“Canada had four submarines at the time – one had burnt out, and the other three had been dry docked. So, when the Navy arrived, I said ‘oh, have you come to look at the only functioning sub in Canada?’… that didn’t go over very well,” he said, with a grin.

He was just as inventive on the forestry side. After a tornado wiped out nearly 5,000 acres of trees in 1995, Schleifenbaum began using the felled wood to design log cabins. Almost three decades later and Haliburton Forest is one of the world’s most renowned producers of personalized log homes.

Schleifenbaum believed in the naturalization of forests and operating sustainably for logging at its sawmill. In 1997, Haliburton Forest became the first Canadian operation to be certified by the Forest Stewardship Council.

Following a near 30-year career, Schleifenbaum retired from his role at Haliburton Forest in 2016. He maintains a residence in the Highlands, along with wife, Elke. His successor, Malcolm Cockwell, said many of the practices “the maverick” implemented remain today.

Despite seeing tremendous growth across most of its operations in recent years, Cockwell said the organization hadn’t been the same since Schleifenbaum’s departure.

“We knew we couldn’t replace Peter’s brilliance, his outside-the-box thinking. That’s something we really miss at Haliburton Forest; the avant garde visionary stuff he brought to the table every single day,” Cockwell said.

Hatchery reels in support from businesses