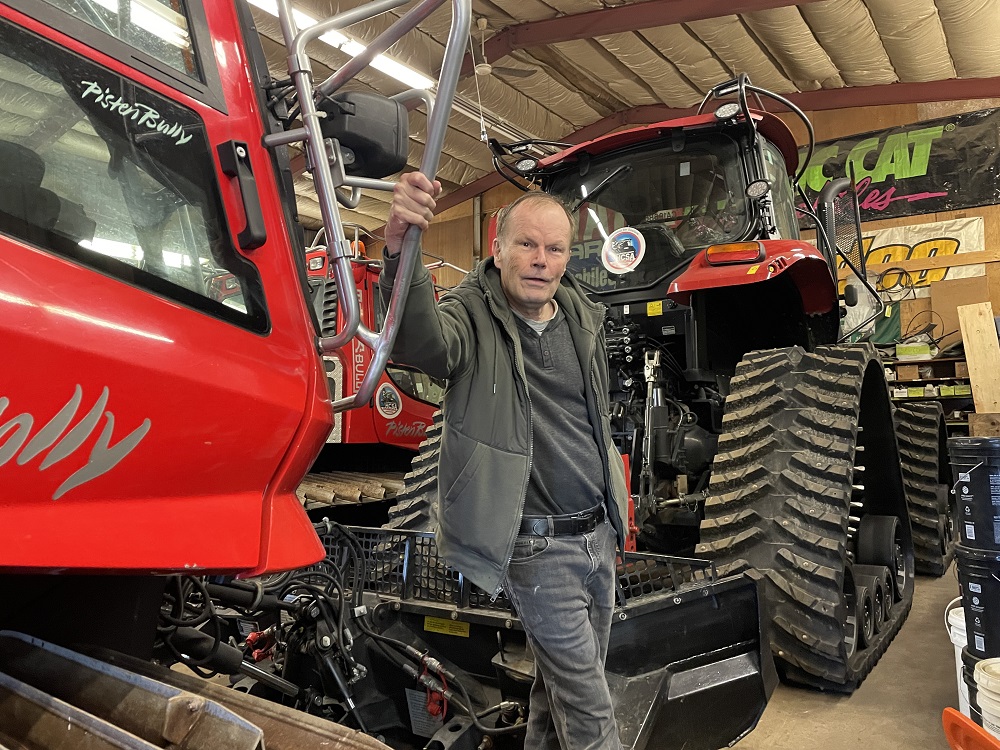 Barrie Martin sits in his Yours Outdoors office on a rainy January morning. He’s on Instagram trying to promote some of his business’s indoor activities while he, the rest of the Highlands winter tourism industry, and the visitors, wait for the snow to fall.

At the moment, it’s flameworking that Martin is selling. “It’s like glassblowing but it’s tubes and rods,” he explains. “Anything to do to throw them (tourists) this way,” he adds.

Like many businesses that rely on winter weather, Martin, who works in conjunction with Haliburton Forest, said it’s been a tough season to date.

He thinks fewer visitors are in the area than during the height of the pandemic. “So, I think demand is down a little bit and that certainly is exacerbated by a winter that has yet to arrive.”

He said Yours Outdoors and Haliburton Forest have had to cancel “all kinds of things.”

For example, the Forest’s snowmobile trails have been closed. It means less accommodation booked. Yours Outdoors has had to scrap things such as igloo building, ice climbing, skijoring, and skiing.

Martin jokes he should change the business name to Yours Indoors, since he is spending a lot of time at the computer marketing, booking, cancelling, issuing refunds, and promoting alternate adventures.

He reckons his business relies on winter for 50 per cent of its revenue so, “it’s fairly significant.”

For example, on this day, he has changed an itinerary for a couple who came to ice climb and snowmobile. They’re now geocaching, going to a water spa, the wolf centre and a sip, swill, savour event. “We try to make the best of what we have.” It requires being “nimble,” he said, but admits that after a while “it does wear on you.”

John Enright is president of the Haliburton County Snowmobile Association (HCSA). He noted they didn’t start grooming last year until Jan. 18, so, “we’re not behind the eightball. The sky is not falling in. We hope it does with snow. No doubt it’s a setback, but the season is not over. It hasn’t even started yet,” he said.

In the meantime, volunteers are “crazy busy” preparing trails since there are several steps, including removing fallen trees on hilly terrain, and, when winter weather returns, staking 17 lakes with 900 orange stakes.

We need several days of cold to dry out all the water and then snow, snow, snow,” the HCSA president added.

He half-jokingly encourages people to do a snow dance. “Put a white crayon in your freezer, wear your pyjamas inside out and put a spoon under your pillow,” he said.

Doug Wilkinson, who owns Sir Sam’s Ski/ Ride, said they had to postpone the planned ski cross for this past weekend and they also had to close some of the slopes. However, he said they opened a week earlier this year and had two winter camps over the school holidays.

“If you look at our guest count … it’s pretty much flat or a little bit up from last year.”

They also have the advantage that they can make snow, unlike those who make money from other sports, including ice fishing and dog sledding. Sir Sam’s was planning to make more snow this past weekend.

“It’s just part of the business,” Wilkinson said. “I actually take it in stride because there’s nothing we can do about it. Not all doom and gloom. You have to stay optimistic.”

He is looking forward to sun and cold going forward, anticipating a fully open hill as of Jan. 12. They are eagerly awaiting 1,500 kids, booked through school trips, to show up over the next month or two.

County climate change coordinator Korey McKay said, with climate change, “we are seeing warmer winters with more precipitation falling as rain instead of snow. This impacts snow and ice cover for winter-based recreation such as skiing, snowmobiling, and snowshoeing, which in turn has impacts on tourism and our local economy.”

McKay added, “the impacts that we will experience in the future depend on global action to reduce greenhouse gas emissions. According to the Climate Atlas of Canada, if emissions continue to rise at current rates, the average winter temperature in the Haliburton area will increase by approximately 5°C toward the end of the century.”

Sky’s the limit for new birds of prey business