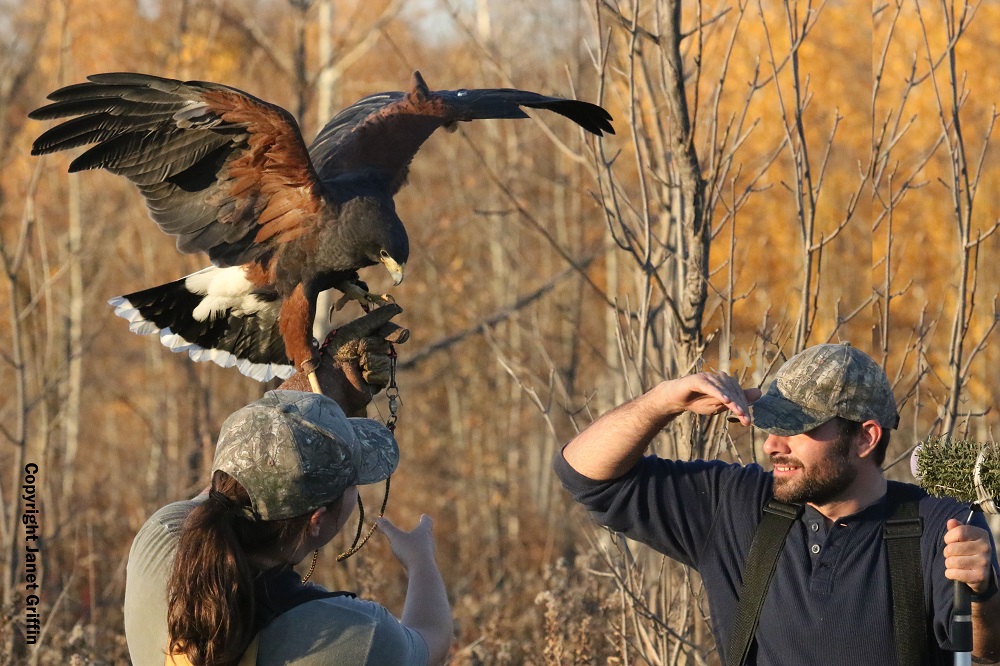 A new Highlands business is hoping the sky’s the limit for its pending venture.

Royal Canadian Falconry has set up shop on Irish Line, and owners Amy MacAlpine and Andrew Carroll are looking to fully launch in the spring.

Their enterprise will involve experiences and workshops. They also do bird abatement and control.

MacAlpine started Royal Canadian Falconry in 2017, but the couple only recently relocated to Haliburton County with their two-year-old son and three working dogs.

She is a registered vet technician, who worked at a clinic for years, and has experience with wildlife.

“I was just fortunate to meet someone who was willing to take me on as an apprentice so I could become a falconer,” MacAlpine says.

In Ontario, falconry is legal but people have to have a hunting license. “Falconry is hunting,” MacAlpine explains. She said Royal Canadian Falconry is different than other raptor centres.

“All of our birds are trained to fly, but hunt as well. They don’t just fly post to post. They’re predators that get to exhibit all of their natural behaviour, while benefitting from captivity. It’s a very rare relationship because birds of prey are not domesticated. They’re not tame as we see in other relationships between humans and animals. The way that falcons work is we hunt with them. We make ourselves very useful to them so they want to work with us,” MacAlpine said. There is positive reinforcement using food.

She added a lot of people romanticize the wild and wilderness, “but nature is very brutal and very tough and birds of prey are just hardwired to know that and understand that.”

In addition to falcons, they have hawks, and an owl, 17 birds in all. They also breed birds of prey so that number fluctuates.

They are in the process of cleaning up the 100-acre property and building enclosures for the birds.

When fully-operational, people can come by appointment to learn about the birds. When they arrive, MacAlpine said she will talk about the enclosures, then pull out the birds.

“We hold them and talk about each of the birds, as a species, their natural history, how they hunt and what they hunt, and then talk about that bird as an individual. For example, this is Petunia, and her job is to protect blueberries in the orchard from nuisance birds.” They then do demonstrations, with one or two of the birds taking flight.

“Our guests will have the opportunity to put their gloves up and have the bird land on them. We try to make it a very personal experience, not like going somewhere with 20 or 50 or 100 people,” the falconer said.

They have done programs all over Southern Ontario and the GTA.

Carroll said when it comes to bird abatement or control, they have worked to eradicate nuisance birds. For example, they have brought their birds of prey to oil refineries and GTA roofs to deter seagulls, and to blueberry orchards to scare away birds such as starlings, which can decimate a crop.

MacAlpine and Carroll said they were looking for a specific type of property for their business and the place on Irish Line fit the bill.

She grew up cottaging at an uncle’s place in the Highlands, and Carroll, whose background includes whitewater guiding, and lifeguarding, says his grandfather was Dr. Louis Carroll.

Haliburton Forest and Yours Outdoors have partnered with Royal Canadian Falconry for a live animal experience. It will be at the Haliburton Forest Wolf Centre this Saturday, Jan. 14 from 3-5 p.m. See more at yoursoutdoors.ca/event/4884/predator-prowl.