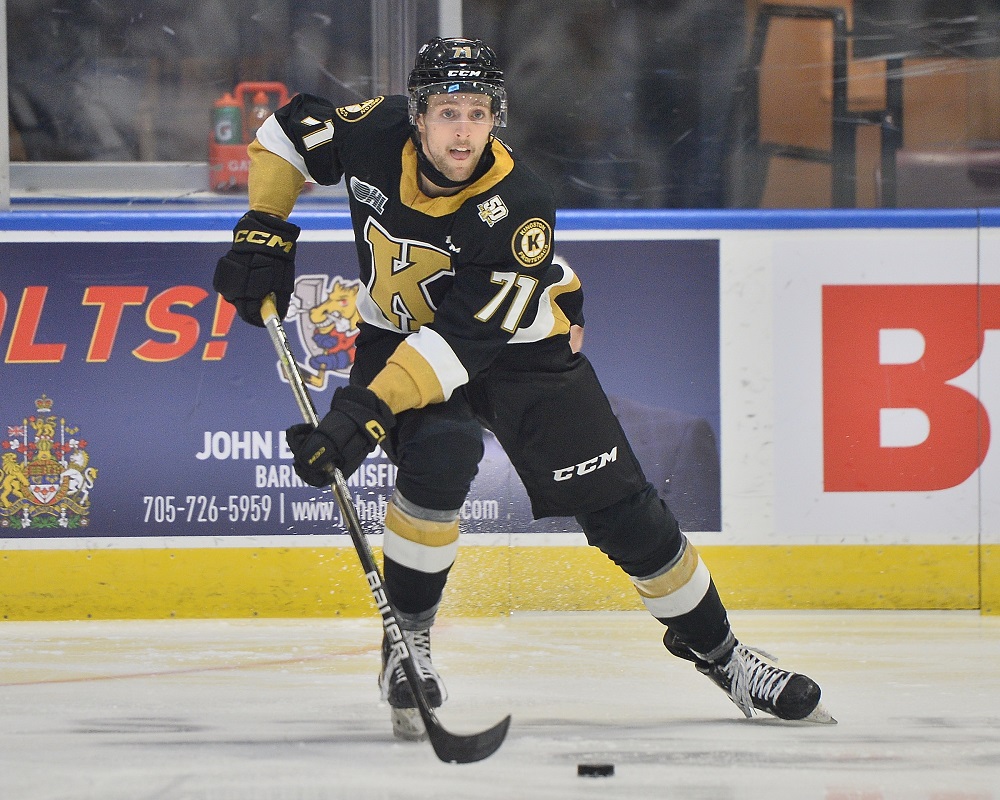 Haliburton County Huskies coach and general manager Ryan Ramsay laid down the gauntlet to his team following a surprise 2-1 road defeat to the Toronto Patriots Jan. 7. He told them they needed to “treat every game as if it were a game seven” if they want to bring a first OJHL championship to the Highlands.

In the midst of a four-game road stand, the Huskies defeated the Caledon Admirals 5-4 in a close game Jan. 5 before their disappointing loss in the city. The team rebounded with a 3-2 overtime win over the rival the Cobourg Cougars Jan. 9.

“Caledon was one of our worst games of the year. We played down to their level, and it was very disappointing. Then against the Patriots, we just got flatly outworked,” Ramsay said. “We talked after those games and I made it clear what our expectations were as a team and organization.”

The Dogs got off to the worst possible start against the Admirals, finding themselves down 2-0 five minutes into the game. Leo Serlin bridged the gap late in the period, assisted by Nathan Duplessis and Declan Bowmaster. Caledon scored the only goal of a drab second period, giving the home side a 3-1 advantage heading into the third. Patrick Saini scored his 20th goal of the season a minute into the final frame, teed up by Boyd Stahlbaum and Isaac Sooklal.

With the Huskies pushing to find a gametying tally, the Admirals hit them on the break, finding a way past Aidan Spooner – brought on in relief of Tyler Hodges in the opening period – to make it a 4-2 game.

The Dogs kept fighting, with Stahlbaum providing hope of a late comeback after burying a penalty shot 12:51 into the period. It took the team 50 seconds to find the tying goal, Alex Cunningham finishing off a move from Luca Rea and Will Gourgouvelis. With overtime looming, top scorer Ty Collins ruthlessly dispatched the puck past Admirals goaltender Antonino Rizzo with just 30 seconds remaining, assisted by captain Christian Stevens and Saini, to spare the Huskies’ blushes.

Things started well against the Patriots on Saturday – Gourgouvelis gave the Dogs a 1-0 lead early in the first, assisted by Stahlbaum and Jack Staniland, but that was as good as it got for the hometown team.

Following the disappointment of that defeat, Ramsay made some changes to his roster. He added Joshua Currie, a 20-year-old left wing who has spent the past three seasons playing in the OHL for the North Bay Battalion, Windsor Spitfires and Kingston Frontenacs, posting 61 points in 167 games.

He drafted straight into the lineup Monday against the Cougars, posting assists on the game-tying goal, scored by Staniland, and the overtime winner, scored by Collins. Sam Solarino had earlier opened the scoring for the Huskies, assisted by Cunningham.

Ramsay made one final tweak to his team at the OJHL deadline Jan. 10, bringing in skilled forward Thomas Johnston from the Spitfires. Wary not to carry too many players, Ramsay dealt Serlin to the Stouffville Spirit and released checking forward Duplessis.

“I’m excited with the moves – Tommy scored 15 goals with the Ottawa 67s in the OHL last season. He’s a really good hockey player – small, but fast as lightning. He’s coming to us hurt, he’s probably a couple of weeks away from playing but he’ll be a great addition once we get him into the lineup,” Ramsay said. “Currie is a big body, with a lot of experience. He’s played a lot of playoff hockey at the OHL level, so I’m hoping he can help us on the mental side once we get into the post-season.”

The Huskies will complete their road trip Jan. 15 against the Wellington Dukes before returning home Jan. 21 to host the Lindsay Muskies. Puck drop at S.G. Nesbitt Memorial Arena is 4 p.m.