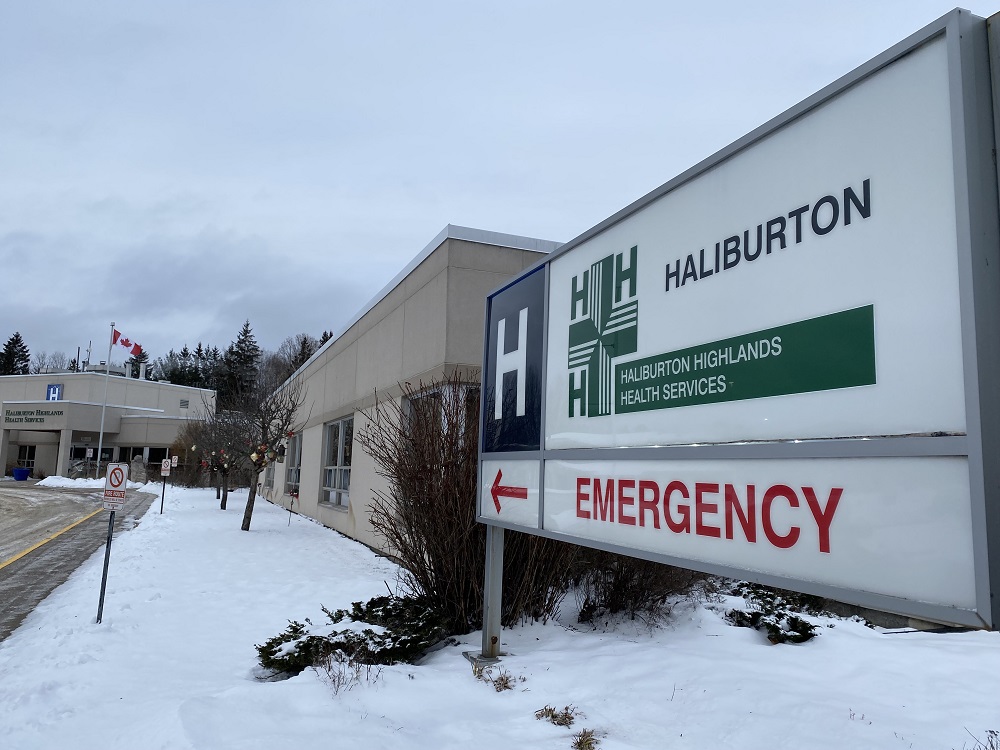 It has been a precarious year for Haliburton Highlands Health Services (HHHS), with the organization reporting there have been more than two dozen “close calls” in 2022 where emergency departments in Haliburton and Minden have been on the brink of a temporary closure.

President and CEO, Carolyn Plummer, told a Dec. 8 board meeting that staff shortages continue to be the number one challenge facing HHHS, with the Haliburton department most impacted. The organization is spending approximately $290,000 per month on agency nurses to keep its services operational.

“On the nursing side, we’re between 40 and 50 per cent of our total nursing hours being provided by agency staff right now. This is happening mostly in emergency, but we’re also using agency on the inpatient side as well,” Plummer said. There’s a shortage of physicians too, Plummer noted.

Around 60 per cent of all doctor shifts in Haliburton are being covered by temporary workers through the Ontario Physician Locum Program. To maintain adequate service levels across its emergency departments, HHHS mandates that one physician and two registered nurses (RNs) must be on-site at all times. During daytime shifts, the hospital also retains a registered practical nurse (RPN).

“The reason we’re running into so many issues is that we have five mobile physicians that provide emergency department care in Haliburton, with three of them also providing primary care across other services. So, they often have limited availability,” Plummer said.

Board chair David O’Brien told The Highlander it has been a challenging 12 months for everyone involved with HHHS.

“One minute you think ‘OK, we’re all covered for the weekend’, then two minutes later we get a call, and we find out we’re not. That’s the reality we’re dealing with,” O’Brien said. “Our job at the hospital is to provide health care services to our community, and we will do that to the best of our ability. But it’s very discouraging when you come so close to not being able to do that. And it’s got nothing to do with how you run your operation, it’s just that a doctor gets ill, like we all do, or a nurse has a family situation, like we all do. These things pop up, and you’ve just got to deal with them.

“Carolyn and her team have done such a fabulous job keeping these hospitals open in the face of such extraordinary pressures,” he added.

While recruitment efforts are ongoing, Plummer said several issues, including a lack of housing and salary limitations, are impacting HHHS’ efforts to hire.

The organization hasn’t brought a new physician onboard since 2021, while they’ve only hired one full-time RN this year. Plummer said the hospitals could use an additional 12 full-time RNs and several doctors.

Plummer said the threat of a potential emergency department closure remains. She is encouraging residents to only visit emergency departments if they have a lifethreatening, or serious situation. Other care options, she said, include visiting a family doctor, or going to HHHS’ COVID-19 assessment centre.

If a visit to the ER is required, Plummer said people should call ahead to make sure the department is open.

As of Dec. 9, HHHS is waiting on just over a million dollars in outstanding COVID-19 relief funding from the Ontario government.

The organization has had to dip into its line of credit to cover operational costs over the past three months, averaging $2,500 on that account monthly. Plummer said she has met with representatives from Ontario Health East to discuss these challenges, which she said have been ongoing for some time.

“The issue of funding delays is not new, as it also presented challenges for HHHS at the same time last year, as well as the year before. It relates direct to funding that is meant to cover incremental expenses related to the pandemic. At the same time, HHHS’ deficit has grown as a result of the health human resource shortages we have been experiencing, and the need to rely on outside support to keep our services open,” Plummer said.

“This has meant the impact of the delays has been greater, as the amount is larger and has been difficult to cover for hospitals, like ours, with limited resources and reserves.”