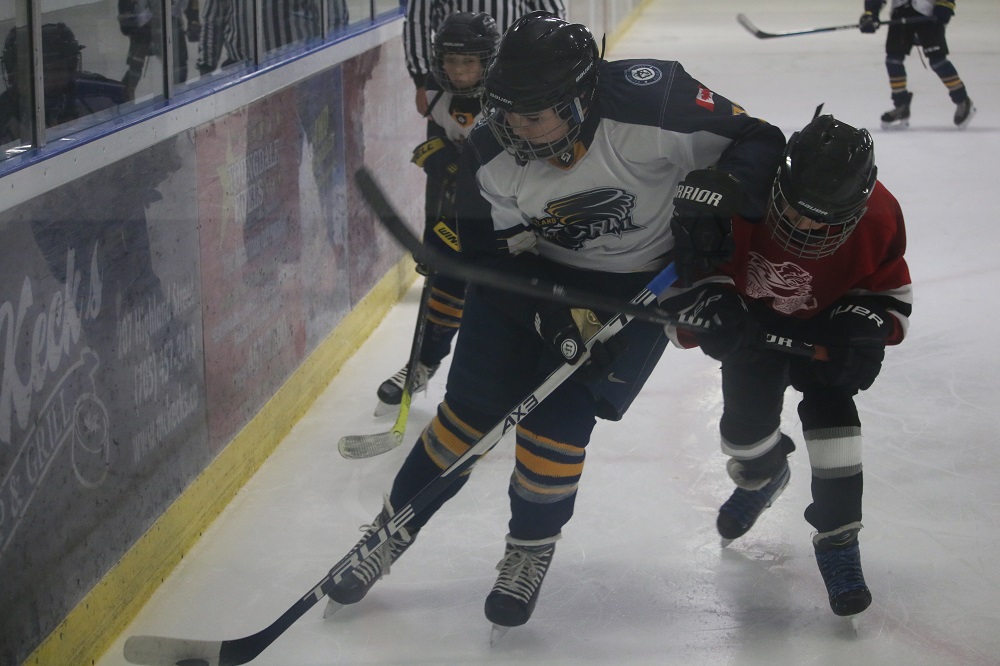 Saturday was an action-packed day with the Storm playing three games.

Our first game was against the Apsley Flames and the Storm dominated the play, bringing home a 5-3 win.

Next, we played Huntsville with a 5-1 win and our last game was a 6-0 victory over Sturgeon.

Three wins took us to the ‘A’ semi-final game on Sunday morning, where we went head-to-head against the Storm’s U13 LL Minden Pharmasave team. Again, we pulled out a successful win with a 5-3 score in a great hometown match-up.

We are so proud of this team for making it all the way to the ‘A’ championship game against the Millbrook Stars. Unfortunately, Millbrook’s size got the best of us and we lost in a hard-fought battle 5-3, taking home the title of ‘A’ finalists.

This entire squad should be commended for coming together as a team the entire weekend. It’s a strong group of players who cheer each other on both on and off the ice.

With a total of only nine players, our goaltender, Colten Simms, played exceptional the entire weekend, keeping the puck out of the net.

Our offensive line saw Tyler Hughes dominate each and every game and light up the scoreboard with a total of eight goals and three assists.

Captain Lyla Degeer showed her size doesn’t matter in the final game versus Millbrook, going in against kids twice her size and coming out with the puck, adding three goals and three assists for the weekend.

Cruize Neave works hard to control the play and is very skilled at assisting defensively when in need. He added two goals and three assists.

Landyn Simms gets himself positioned perfectly in front of the opponent’s net and brought in two goals and two assists.

Our defensive team had three players rotating through, with Levi Rowe proving his abilities in back checking consistently throughout every game and bringing in five assists.

Lucas Vale brings to our team size and grit as well as adding to the scoreboard with two goals and two assists.

Hunter Hamilton stands his line well keeping the puck in the offensive zone and taking scoring opportunities when he can, bringing home two goals and five assists.

Head coach Mike Hamilton, trainer Marcus Rowe and assistant coach Cory Simms do an amazing job keeping this team focused and competitive all while having fun.

A huge thank you to all teams for attending this past weekend and all the parents and fans for coming out and cheering us on.

Craig and Tammy Smith always do an amazing job organizing these silver stick tournaments and we are forever thankful.