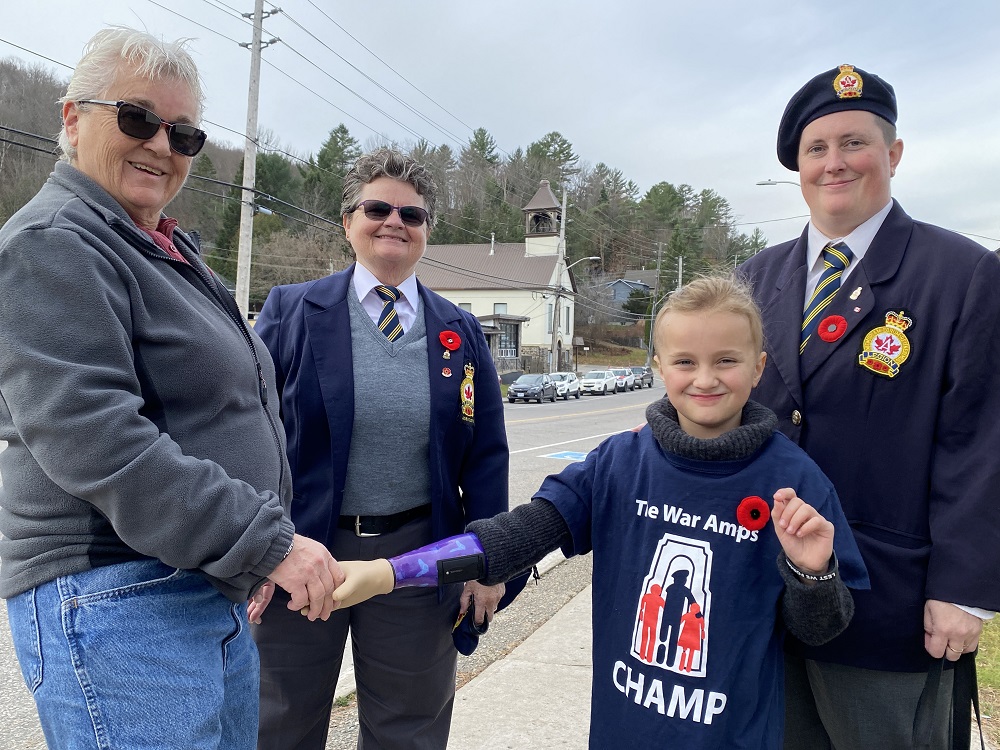 Seven-year-old Haliburton resident Valla Berry was all smiles last week as she showed off her new prosthetic arm, declaring herself “a War Amps champ.”

Born without a right hand, the youngster was presented with the prosthesis in time to wear it and march in the Nov. 11 Remembrance Day parade in Haliburton. Helped by her mom, Adrienne Clark, Valla placed a wreath at the Cenotaph on behalf of War Amps Operation Legacy. It was a fitting way for the family to recognize the “amazing” contributions of War Amps, said Clark.

“I don’t know where we’d be without them. They have been absolutely amazing with us throughout this journey, and to see the smile on Valla’s face today, it was just a special moment,” Clark said.

Through its Child Amputee Program, War Amps offers comprehensive services to child amputees and their families, including financial assistance, peer support and regional gatherings and seminars. All services are provided free of charge.

To date, Clark estimates the organization has provided more than $20,000 worth of support.

“The [Ontario] government only covers 25 per cent of the cost of a prosthetic, so it can get expensive. War Amps has covered the rest of the cost, they’ve paid for any special appointments we’ve needed, they cover the cost of our trips down to the city for appointments, so gas, food, overnight stays if we needed it. It’s such an incredible operation,” Clark said.

Clark said she and her family have supported War Amps efforts for generations, dating back to her grandfather Sydney Adamson. A tail gunner in the Royal Canadian Air Force during the Second World War, Adamson donated regularly to War Amps through its key tag service. Tags are mailed to participants annually and can be latched onto a key ring, with a number attached for people to call if they find a lost set. Since the service began in 1946, more than 1.5 million sets of lost keys have been returned to their owners.

This will be Valla’s second unit. When she was younger, she was fitted with a passive prosthesis – a hook she would use while at home or the playground. She quickly outgrew it though, with Clark saying it served as more of a hindrance.

Then, after returning home from school one afternoon in spring, Valla asked her mom a question that kickstarted this whole process.

“She came home from school one day and goes ‘I want two hands just like everyone else,’ and that was just about the most heartbreaking thing I’ve ever heard,” Clark said.

Valla said she “absolutely loves” her new hand, which she designed herself.

“It’s great. Now I get to wear it around and pick stuff up,” she said. “My favourite thing to do now is shake hands with it, because I couldn’t do that with my right hand before.”