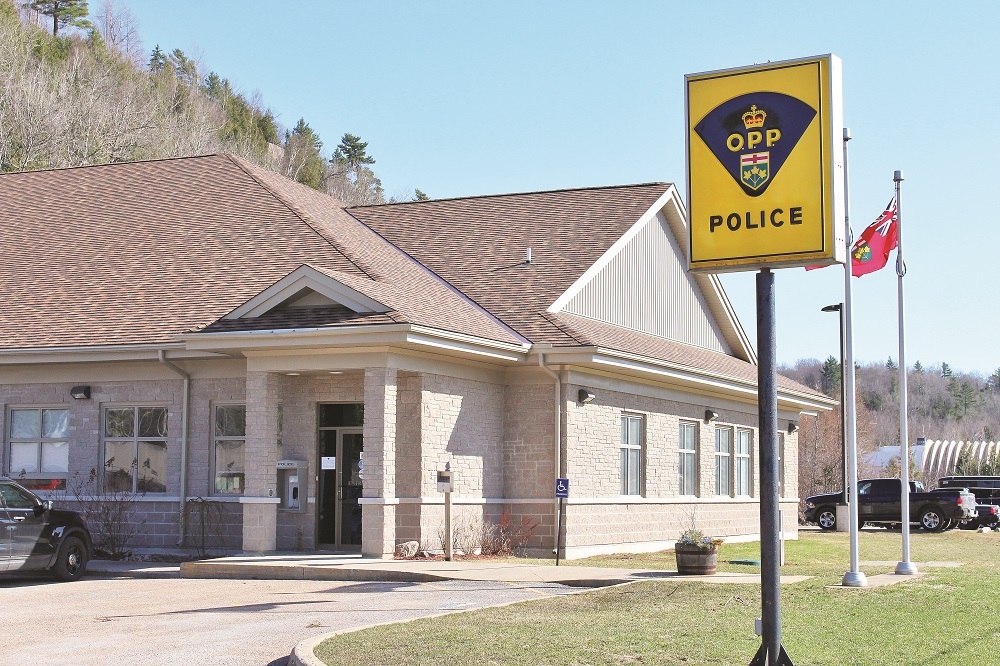 The Ontario Provincial Police (OPP) say it has “paused” any structural changes to command at the Haliburton Highlands detachment until a new police services board is established.

County council, at a Nov. 9 meeting, said there were rumours the detachment would have its management consolidated with the City of Kawartha Lakes OPP, essentially making Haliburton Highlands OPP a satellite, but that had been dispatched for now.

Mayors of Algonquin Highlands, Dysart et al, Highlands East and Minden Hills, as well as the township’s CAOs, met with OPP brass, including central region chief superintendent Dwight Peer, Nov. 2. The meeting was called to address the issue of possibly removing the detachment commander from the Highlands, and replacing that position with a manager answering to the Lindsay-based OPP detachment commander.

After going into closed session at the County meeting, County warden Liz Danielsen emerged to say after hearing “consistent rumblings” about command consolidation, mayors Carol Moffatt, Andrea Roberts, Dave Burton and Brent Devolin feared, “a serious impact on the services provided in Haliburton County should that take place.” She said the County brokered the meeting with OPP to get clarification.

During the council meeting, councillors passed a resolution that would see the matter discussed at each township, since they are invoiced by the OPP for services, not the County, before the end of the year, with each rejecting any such move and letting the OPP know

However, Danielsen said the mayors came away from the Nov. 2 meeting hopeful no consolidation of command will occur.

However, Peer made no such assurance when approached by The Highlander. A spokesperson for Peer told the paper on Nov. 14, that one of the mayors’ concerns was they are awaiting a response from the province on their OPP detachment board submission. When the province mandated community safety and wellbeing plans, the County was told it needed a local police services board.

“While staying committed to improving staffing levels at the detachment, we have paused any structural changes to command at the detachment until the dedicated Haliburton Highlands OPP Detachment Board is established,” the spokesperson said.

“Central Region Command and Haliburton Highlands Detachment staff are committed to working collaboratively with the local OPP Detachment Board, once established, and the municipalities it represents to make the best possible decisions regarding public safety and policing services within Haliburton County and its municipalities,” the spokesperson added.

Gosia Puzio, a media relations officer with the OPP, further said, “the OPP continuously evaluates its operations to seek efficiencies in support of public safety. Our focus remains the delivery of the best possible service to the community, and we will explore all avenues to do so, which includes command consolidations. Any proposed changes would not reduce frontline policing service.”

At the Nov. 9 meeting, Devolin said the County had been stung in the past with rumours leading to “fait accomplis”, such as a controversial increase in OPP billing in 2014. He said with the newly-adopted community safety and well-being plan and a planned police services board locally, the rumblings surprised municipal councillors and staff. He said he was pleased the County was able to broker a meeting on behalf of the townships.

He panned the lack of community engagement. He said the townships are “paying the tab” and if major changes are being considered, “they need to dialogue with us.” He is eager for a police services board “so this sort of thing never happens again.”

However, he thought the meeting was “productive … I think we got some guarantees that if the community doesn’t want this, that won’t be the case.”

Coun. Carol Moffatt agreed. “The way this unfolded was really unfortunate. There was no ahead-of-the-game consultation but a series of events that got ahead of themselves with no details whatsoever.”

She said the change would have impacted the services, “especially in the face of the growth that we’re seeing.” The 2021 Census put County growth at 14 per cent.

“Suggesting moving the detachment commander position and replacing it with a manager is absolutely unacceptable and I think is an insult to our community. A lot of people have worked very, very hard for the establishment and retention of police services in Haliburton County and our growth requires more policing services, more robust policing relationships, not less.”