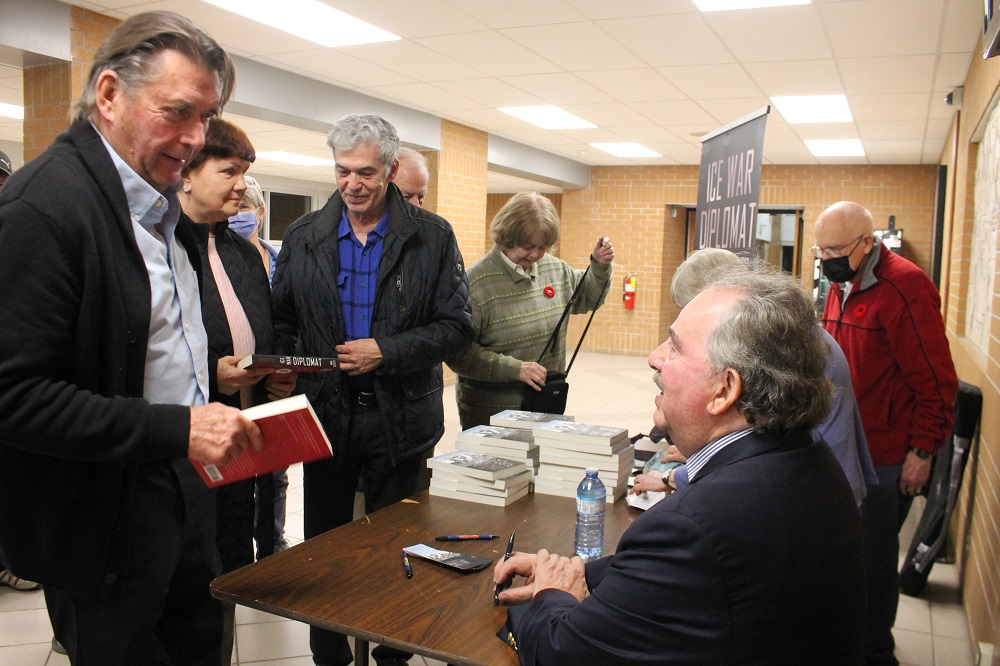 That historic piece of hockey history was present in Haliburton Nov. 10 as Those Other Movies showed the documentary, Ice Breaker: The 1972 Summit Series. They also brought Canadian ambassador to Russia at the time, Gary Smith, to the Northern Lights Performing Arts Pavilion. He talked about his involvement in the series. Local filmmaker Helen Parker also spoke as she was involved in the making of the movie.

The Russian-speaking Smith explained how the series came about. Then prime minister Pierre Trudeau visited Moscow in 1971 to try to warm the cold war. It resulted in a return visit by Soviet premier Alexei Kosygin. Although initially met with protesters, he was taken to a hockey game where he got a better reception. It sparked an idea for Kosygin that hockey could improve relations between the two nations.

Smith was involved in the negotiations to bring the series about. He told the audience it was “a great privilege to be in Haliburton.”

“I think we all know this was the greatest hockey series ever,” Smith said. “In 27 days of September of 1972, this country was fixated on a hockey series with the Russians. I was fortunate enough to be at the Canadian embassy in Moscow as a Russian speaker and playing for the Moscow Maple Leafs and got involved in all the negotiations for this series, travelled with the Soviet team across Canada, looked after Team Canada in Moscow and you’ll see there were a lot of hijinx that went on. Everyone thought Canada was going to wipe the ice with the Soviets. We didn’t and it was a last-minute thing, but I think you’re going to find this a beautiful film, a film where people cry, laugh, applaud and jump up and down,” he said.

He re-visited Moscow in 2021 with director Robbie Hart where they did some interviews with the Soviet players, finding the experience “unique.”

Parker went to Moscow in 2017 for the 45th anniversary of the summit series where she interviewed players. She said a friendship she and husband Carl Dixon struck up with Ron Maclean during Rogers Hometown Hockey in Haliburton also helped to get Maclean in the film.

Those Other Movies (TOM) is back from a COVID hiatus and celebrating its 18th year, said spokesperson Tammy Rea. She said they will be continuing the TOM series but are holding off on the Haliburton International Film Festival (HIFF) and doc(k) day for now.

She said with the growth of Netflix and Amazon Prime, they were worried about getting films but their “sleuths” found great films at the Toronto International Film Festival (TIFF) and Cinefest in Sudbury, so have some “amazing” movies on the way.

Food for the rest of us

Food for the Rest of Us, a film screening with director Caroline Cox, is happening Nov. 24 at 7 p.m. at Haliburton School of Art + Design

Organizers said it’s a feature film that presents four stories of people living life on their own terms, serving as leaders and role models, and leading a revolution to a better world, from the ground up.

Created by two Canadian filmmakers, “this film is powerful, inspiring and embodies messaging of youth empowerment by connecting them to food,” organizers said.

All viewings will have a question-andanswer session with Cox.

Cost is by donation and all proceeds will go to the re-launch of Abbey Gardens’ Sprouts to Snacks program, which provides youth with a full circle experiential opportunity to learn, appreciate and enjoy being a part of where their food comes from.

For more information, contact Irene Heaven at Irene@abbeygardens.ca or call 705-754- 4769.